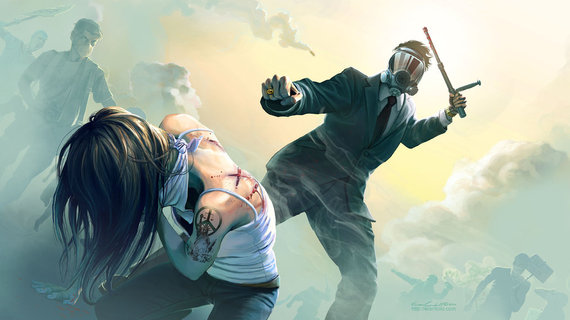 Yet another dimwitted police officer who snapped, yet another innocent man who lost his life to meaningless police brutality. Nothing new there. Ever since Ferguson, incidents like this are commonplace. You cannot even turn on the news or read the day's paper without coming across such a thing. But what motivates these acts of needless cruelty? Is it racism, incompetence or inadequate police training? Perhaps it's a little of all three.

On January 8, 2016, the Texas police department responded to a report of a man seen pointing a rifle out of the fifth-floor window of the La Quinta Inn in Arizona. Daniel Shaver, father of two, a respected citizen with no prior criminal records, was confronted by the police on the streets outside the hotel. He was unarmed, defenseless and intoxicated. He complied with every single order as he crawled his way towards the police, sobbing, hands over his head. "Please don't shoot me", he was heard begging as the police officers awaited his approach. At one point, Shaver apparently reached towards his lower back in an attempt to pull up his shorts. That, it seemed, was too much for the nervous brain of a mentally incompetent police officer to handle, who immediately fired five shots, killing the man in an instant. The officer who fired his gun was Philip "Mitch" Brailsford, who has since been discharged and charged with second-degree homicide after the county attorney determined that the death was a result of "unjustifiable" force. Brailsford is now on trial and will probably receive a sentence. But will that even begin to undo the wrongs done to Mr. Shaver's wife and two children?

Now, Brailsford is out there telling people how there were all sorts of things racing in his mind as he fired those shots. "Does the man have a gun in his possession?" "What if he shoots?" "I don't even have insurance!" However, as a police officer, it is a man's duty to assess when a threat is real and when it is not. This wasn't his first offence either. Authorities state that his discharge was the result of a series of unpolicemanly actions that included the unnecessary use of brutal force on convicts. Of course, Brailsford isn't the only one to blame here. Years of inadequate police training and fear mongering in the police department is what has resulted in this tragic scenario.

The Obama administration has oft come to criticize the use of excessive force in police arrests. On Ferguson, Obama said, "Put simply, we all need to hold ourselves to a high standard, particularly those of us in positions of authority". However, how are we supposed to address a situation this grave if we don't even have proper intelligence? While police brutality is unbelievably high in the United States when compared to other developed nations, you will be surprised to hear that more than a quarter of all police-related deaths in the country go undocumented each year.

The federal government depends on two separate wings for the documentation of all police-related homicides incurred annually. The FBI's Supplementary Homicide Reports (SHR) and the Bureau of Justice Statistics' Arrest-Related Deaths (ARD) are the two departments responsible for documenting all cases of police-related deaths. However, as a study conducted in 2015 by the RTI International clearly came to show, each of these two organizations hugely undercount the number of deaths each year, documenting only as low as 49% and 46% of all deaths annually. Together, they are found to have ignored a total of 28% of police-related deaths nationwide from 2003 through 2009 and 2011.

All numbers aside, there is a plethora of reasons why the homicide count as documented by the SHR and the ARD are flawed and undependable. All data collected in relation to law enforcement homicides are obtained through state coordinators by the ARD. However, the methods of data collection vary widely from state to state, and while the ARD at least requires all states to submit available data on police homicides, the SHR investigations are complete voluntary, meaning that any state can opt out of it at will. States like Florida, thus, never participate. Further, these reports are also designed to exclude all those cases where the said police homicide is debatable on grounds of justifiability. Deaths in federal jurisdictions, too, are largely excluded in these reports. With all these loopholes in the statistics department, it is only reasonable to argue that a large number of inexcusable law enforcement homicides go undocumented each year in the United States. With a system this flawed, how are we supposed to combat police brutality?

Ever since someone enters the police academy, they are regularly brainwashed with the following idea: "Better to be judged by twelve than carried by six." That's right, before protecting the lives of the citizens it serves, the police force is trained to uphold the sanctity of its own lives above all. The greatest accomplishment in the life of a police officer is to grow old with his family. The idea behind going out to work each day is to come back home safe, if that means firing open a few bullet holes through a couple of innocent kids, so be it. The police department is, quite literally, ingrained to be self-serving and overprotective of its own self. Is it a bad thing to value one's own life? Certainly not. But is it not wrong to endanger the safety of others in the face of unwarranted paranoia? I will say it is.

We will never be able to return to Laney Sweet and her two children what they lost on January 8. The death of Daniel Shaver, a completely innocent man, was inhumane and inexcusable. But can we at least take a pledge to prevent similar incidents in the near future? If so, the first thing we need to do is count our dead.