So how many of you heard about last week's "Twiot" on Hollywood Boulevard, when DJ Kaskade -- via Twitter -- invited all 90,000 of his followers to come on down to the Chinese Theater on the night of July 27 for a spontaneous block party?

When 2,000 people actually did take DJ up on his offer, well, things went from bad to worse pretty quickly out there on Hollywood Boulevard. Due to the crowd size, Kaskade's block party basically got shut down before it could even get rolling. As a direct result, a number of would-be partygoers vented their frustration by throwing bottles and lighting trash fires. In an effort to bring this somewhat unruly group under control, the police donned their riot gear and then began firing beanbags into the crowd.

As far as riots go, this one was kind of underwhelming. By the end of the evening, only three people had been arrested, mostly for the admittedly stupid crime of jumping up and down on a police car.

But seeing that footage on CNN of those kids and cops facing off against one another on Hollywood Boulevard, well, it reminded me of the last time that Southern California's youth sought to do battle with "The Man" in a theme-park-like setting -- which was back on Aug. 6, 1970, when a vocal group of Yippies forced the early closure of Disneyland.

"Now, what exactly is a Yippie?" you ask. A Yippie is/was a member of the Youth International Party, which was this theatrically inclined offshoot of the free speech and anti-war movement of the 1960s. Founded by Abbie Hoffman and Jerry Rubin in December 1967, the Youth International Party was always looking for new ways to mock the establishment and doing deliberately silly things like insisting that a pig ("Pigasus the Immortal") was the Yippies' candidate of choice in the hotly contested presidential race of 1968.

And given that the Youth International Party was always on the lookout for very public venues where they could then stage pieces of political theatre, when word got out in the late spring of 1970 that Disneyland had just relaxed its dress code for guests (meaning that teenagers with long hair and dressed in hippy garb were no longer automatically turned away at the turnstiles), the Happiest Place on Earth became a very tempting target for Hoffman and Rubin.

Which is why, in late June and early July, a flyer began making the rounds in countercultural circles about the Yippie convention that was going to be held at Disneyland on Aug. 6. This day-long "International Yippie Pow-Wow" was loaded with deliberately theatrical events, like a Black Panther's hot breakfast at Aunt Jemima's Pancake House, not to mention a Women's-Liberation-inspired moment when the female Yippies were to have gathered in Fantasyland to liberate Minnie Mouse.

Looking over this flyer today (which includes flat-out ridiculous items like the Mid-day Feast, where Porky Pig, a non-Disney character, was supposed to have been barbecued), it's pretty obvious that 90 percent of the "events" scheduled for Aug. 6 were never actually supposed to happen. It's clear that the whole point of the "International Yippie Pow-Wow" was political theater on a grand scale, with Disneyland providing a big, colorful backdrop for a "happening" that Abbie, Jerry and company hoped would garner all sorts of free publicity for the Youth International Party.

But what the Yippies failed to take into account was that it had barely been a year since Sharon Tate and four others had been brutally murdered in Tate's Benedict Canyon home. And because the trial of Charles Manson and his associates had just gotten underway in June, Southern California wasn't exactly the most welcoming place during the summer of 1970, especially if you were a young adult with long hair who dressed in hippie-style clothes.

Add to this the fact that Disney Company execs remembered all too well what had happened back in August 1968, when 10,000 demonstrators had traveled to Chicago in hopes of capturing some of the media's attention during the Democratic National Convention. The ensuing riots, during which Chicago policemen and members of the Illinois National Guard had been seen on live national television beating protestors in the street, had given that city a huge black eye, not to mention a PR headache that continued well into 1969, with the media circus that surrounded the Chicago Seven Conspiracy trial.

That, in a nutshell, was the nightmare that Mouse House managers feared would come true with this Yippie convention that was supposed to be held at Disneyland on Aug. 6. They worried that some sort of ugly incident would happen inside their theme park on that date and, worse yet, that this confrontation between the establishment and the counterculture would be caught on camera and forever ruin Disneyland's reputation for being the Happiest Place on Earth.

So in the weeks leading up to the "International Yippie Pow-Wow," there were dozens of meetings among Disneyland managers. Because no one knew how many kids would actually be coming out to Anaheim on Aug. 6 to take part in this event, they prepared for the worst. Anticipating that thousands of would-be protestors would descend on the theme park that morning, a special command and communications center was set up backstage. Cast members were warned that if they came across some sort of incident while were working in the park that day, they weren't to take matters into their own hands. Rather, they were to take advantage of special radio codes, which Disney had created just to deal with the Yippie threat, to call for backup. 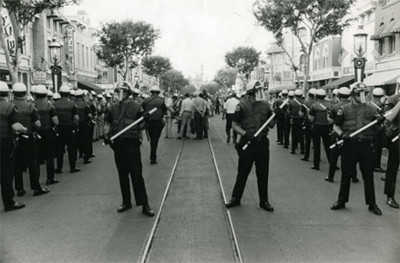 And speaking of backup, just to make sure that they had the manpower and muscle necessary to actually stop a riot should the unthinkable happen, Disneyland officials reached out to the Anaheim and Fullerton police forces, who then sent a combined force of 150 officers in full riot gear to that theme park. These policemen arrived in the pre-dawn hours of Aug. 6 and then assembled in the backstage area between Main Street, U.S.A. and Tomorrowland, out of sight of the general public.

So what actually happened on Aug. 6? Check again tomorrow and I'll tell you.

Jim Hill is an award-winning entertainment writer who lives in New Boston, N.H. Over the past 30 years, he has interviewed hundreds of veterans of the animation and themed entertainment industry and written extensively about The Walt Disney Company. For his more immediate musings on movies, TV shows, books and theme parks, please check out his blog, jimhillmedia.com.