Communist Cuba may soon see a non-government newspaper produced on the island.

Cuban blogger Yoani Sánchez said she plans to launch an independent digital newspaper this year, and may follow with a paper edition -- an unprecedented step in a country where the Communist government has controlled the media for decades.

“I’m very excited,” the author of the blog Generation Y told The Huffington Post in an interview on Thursday. “We’ve got a well developed web design, mock-ups in PDF, a small editorial team.”

An independent digital newspaper, if it moves forward, would mark a major political change for Cuba.

“Legally, the government has a monopoly on media,” Cuba scholar Arturo Lopez-Levy told The Huffington Post, noting that the country’s constitution mandates media centralization. “However, I think there is a crack, because so many people have access to digital media now.”

Sánchez is a controversial blogger known internationally for “Generation Y,” a blog of vignettes depicting what she views as a stifling and unjust atmosphere in Revolutionary Cuba. (The blog is republished in English and Spanish on The Huffington Post.) Sánchez said the new site will cover hard news and publish criticisms of the government she’s famous for, as well as more practical issues.

“For example, there’s no information on real estate in Cuba,” Sánchez said. “They legalized the sale of homes, but you can’t find a place to read what tendencies are, what prices are, what the pros and cons of different neighborhoods are.”

Sánchez spoke after a talk at Columbia University, where she was invited four years ago to receive a Maria Moors Cabot Prize. The Cuban government did not allow her to leave the island then, with a restrictive policy aimed at combating brain drain that required Cuban citizens to seek exit visas to leave.

Sánchez received permission to leave this year, after the Cuban government discontinued the policy. Traveling for the first time in the U.S. this week, New York is her latest stop on a romp around the Americas and Europe.

“Yoani is a pioneer digital journalist,” Columbia journalism professor Josh Friedman said when introducing her. “Yoani seems to me to be devoid of ideology. She’s an observer.”

The Castro government regards Sánchez -- and many other government opponents -- as a foreign-financed invention of Washington, whose goal is to undermine Communist rule. Cuban state media accused her of taking money from the CIA to finance her trip, via a National Endowment for Democracy grant to the non-government organization People in Need.

When Sánchez arrived in Brazil, she was greeted by about 20 protesters who shouted “Viva Fidel” and “Yoani sold to the Yankees,” according to ABC News. Protests have erupted at several events she attended while abroad.

The controversy followed her to New York. Sánchez’s appearance at Columbia University finished with a small outburst, as a young woman in the crowd rose to her feet and unfurled a sign reading “the press is not free, just cheap” and accused Sánchez of taking millions of dollars from the U.S. government. A Columbia student yelled at the woman holding the banner to “shut up” from across the room, while a disgruntled reporter repeatedly shouted an unanswered question about the ethics of using Facebook.

“The first reaction I had was, ‘Wow, I’m in a democracy,’” Sánchez said during her presentation at Columbia when recalling the protest in Brazil.

“Fidel Castro’s government received a lot of support from the Kremlin,” she said. “I don’t think they have the moral authority to judge civil society for receiving support from outside.”

And Sánchez may need money from outside Cuba to realize her dream of starting a digital newspaper, though she said she plans to finance the project for the first three years with money she’s received from journalism awards.

Just running her blog has been extremely expensive, by Cuban standards. Sánchez built her reputation in part with Twitter, firing off a steady stream of tweets that might include personal observations, on-the-ground news tips, or the phone numbers of activists she hopes the international press will interview.

But without consistent and rapid access to the Internet, Sánchez and bloggers like her use cell phones to send text messages to Twitter. That costs a whopping $1.10 per tweet, she said. The 15,550 tweets she’s pumped out amount to small fortune for the vast majority of Cubans, most of whom live on around $30 a month, though the Communist system offsets many fixed costs, like housing, health care and education.

Many of the people who will read the online newspaper more than likely won’t be surfing the Web. Instead, Sánchez said, readers likely will share the publication the way they often share Web pages now -- on CDs, memory sticks and portable hard drives. Such distribution methods avoid the problem of unreliable or slow Internet connections.

The online news site would add diversity to a news cycle dominated by state outlets like Granma and Juventud Rebelde, according to Lopez-Levy. “This will add to the pluralism in coverage of Cuba,” Lopez-Levy said.

It also may mean running afoul of the law or inviting the ire of Cuban authorities. But Sánchez said she’s not worried.

“Cuba’s a subject that stirs passions,” Sánchez said. “But like all journalists, I’m used to getting in trouble.”

CORRECTED: An earlier version of this article stated that most Cubans live around $30 per day. The correct figure is roughly $30 per month. 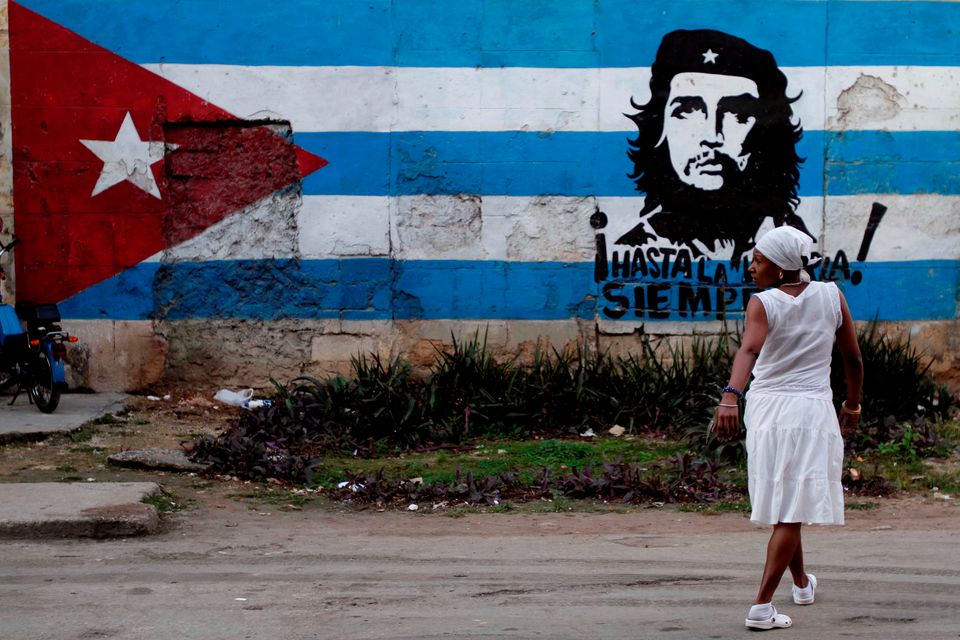 1 / 15
A santera looks back while crossing the street where a wall is covered with a mural of the Cuban flag and an image of Cuba's revolutionary hero Ernesto "Che" Guevara in Havana, Cuba, Friday Jan. 27, 2012. After economic reforms by President Raul Castro were endorsed by the communist congress in mid-2011, the Communist Party of Cuba (PCC) is preparing to hold a party conference this weekend. (AP Photo/Franklin Reyes)
AP