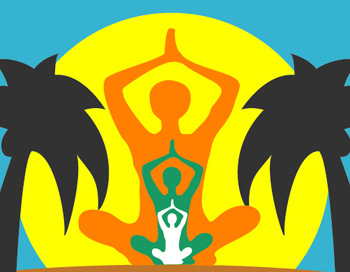 Over the past six years, my yoga practice has taken many forms. When I consider the deeper meaning of yoga, I realize it's about a lot more than simply performing a variety of postures on a mat. Yoga has a rich history, and it carries a different meaning for each yoga practitioner. There are different poses, different inner and outer practices, and different interpretations of how each style can influence both body and spirit. There are DVDs, group classes and yoga retreats. But I would assert that despite the wide variety of yoga options and individual preferences, there is one universal element: the union of consciousness and movement, breath and awareness. This union gives way to the wonderful connection between mindfulness and activity, a practice of being present, regardless of what we're doing in the moment. This "doing" may be crow pose, a deep breath, or simply washing the dishes.

Like many devoted practitioners, I reached a point where I had to distinguish my own unique practice. I had to find my own way by exploring what yoga meant for me, separate from my teachers, apart from the larger yoga community, and ultimately, off the mat.

During my decade-long daily practice of Ashtanga Mysore, yoga was so much a part of my existence that it never ever occurred to me one day life might change so drastically that I would no longer be a "daily Ashtangi." But life inevitably throws us curve balls, unexpected circumstances that remind us to expect the unexpected. I've come to understand these curve balls are the beautiful unfolding of both karma and current.

Despite my yogic discipline and devotion, and even with the supplementation of Pilates, acupuncture and Chinese medical massage, a serious spinal condition that I'd battled for nearly eight years continued to worsen. I'd stubbornly denied that my particular yoga practice had anything to do with my back issues. The harder side of me didn't want to surrender to my body's cues. The masculine side of me thrived on engaging in an athletic yoga style. I was hooked on the adrenaline of strenuous workouts, an approach that didn't exactly exemplifying the meaning and purpose of yoga. It took a few painful months, but I eventually admitted that perhaps my hardcore approach was exacerbating my injuries and actually increasing the physical irritation from within.

I think many people move toward yoga, at least initially, for external reasons. Practice can lead to weight loss, a toned physique, a pleasant high and connection to a like-minded community. Who wouldn't want that? Initially it was those things that drew me to practice (unaware of the deeper access to a spiritual connection it would eventually provide). For many people in the West, myself included, those external reasons can cement the perfect ground for injury. Without yoga's essential element -- mindfulness -- assuming extreme postures can be dangerous. But these very same postures, when done with intentionality and awareness, can potentially allow for the very mindfulness that yoga is intended for. In this sense, balance is more than a physical goal; it's a mental -- even spiritual one -- too.

With my back condition worsening, I finally agreed to doctors' suggestions and had surgery. Little did I know that when I underwent an eight hour spinal fusion I was actually four weeks pregnant with my miracle baby, Jade (full story in my memoir, Beauty Disrupted). I had one hell of a recovery ahead of me. Healing from a major surgery while growing a baby is a practice unto itself. Thankfully I did recover and nine months after that fusion, I gave birth to a beautiful baby girl.

It wasn't until just this past March while on vacation with my family in Sayulita, Mexico, that I dared to take my practice back to the mat. That isn't to say there hadn't been some sun salutations, light stretches, and intermittent standing poses over the past six years. But I certainly had not engaged in a fully committed mat session since before the birth of my eldest daughter.

There is a place that yoga gets to that no other physical activity seems to touch. It is the internal workings, the profound sense of calm, the physical clarity, and the beautiful connection between mental and bodily ease. Yoga gracefully brings this all together. 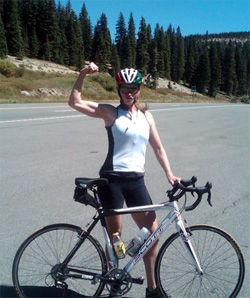 I'll admit it. I'm a jock (self-proclaimed). I bicycle 12,000-foot mountain passes, run, cross train, skate-ski, hike and mountain bike. All of these activities have been a huge part of my life over the years, but now as a parent there's limited time for fitness regimens. Mommy-time constraints, for better or worse, have led me toward the quick cardio fixes, and my rough jock side self keeps me engaged in rigorous activities more than the gentler ones.

But on that beach in Mexico, with the waves rolling in and out, the soft sand beneath my toes, the ocean mist, and the warmth of a seaside oasis, I was moved to experience that inner balance again, that absolute divine union that, for me, comes with the practice of yoga. (Perhaps the merging of all of those raw elements stimulated my desire for the merging of another sort -- of movement, breath and mindfulness.) The elements seemed to be calling me back to the mat. Or the beach towel as it were. With my hands in Namaste, I set an intention: May this practice be conscious. May my movements be honoring. May it benefit all beings.

And with that I married my breath with the flow that carried me through five simple sun salutations and then into the B series of salutations, extending into warrior-pose. I moved slowly and deliberately. As I worked through the series of standing postures, loosely following the basics of the Ashtanga series, I made it a point to remain present to how I felt. I took deeper breaths and allowed for longer holds. While the ocean waves broke just yards away, sweat dripped off me, not from any cardiovascular work but from the deeper work yoga requires. Its purification benefits are undeniable. Body needs breath. When else can we so consciously circulate breath through our body? How better to directly guide our autonomic nervous system toward equilibrium? What a gift it is to move and remove toxins while letting go of stagnant energy. By stepping into these poses, holding them and then breathing into the next we can more harmoniously unite the mind and body. Here we also gain access to a new view of our life circumstances as well as what is going on within -- emotionally, mentally, physically and otherwise. 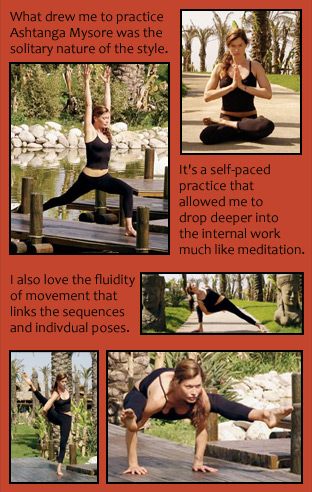 By the time I moved to the sand for some sitting poses, my children had returned from a walk with my husband. My miracle baby, Jade, took her place by my side and began mimicking my postures. Together we navigated forward bends and several other Primary Series floor poses that I hadn't attempted since before her birth. We giggled as we worked our way into back bend prep and shoulder stand, wiggling our toes at the big blue sky above.

As I stood up and centered myself, preparing for a handstand, my daughters cheered me on. I laughed immediately, certain I couldn't possibly kick up, without a wall behind me, on uneven sandy ground. But I did -- 43 and still a hand-stander! Turns out I wasn't as far away from my practice as I thought I was. Although it had been years, and while the beginning of that beach practice was uncomfortable, my body had memory. I was able to open up and quiet down. I was able to really navigate and experience the inner journey that yoga is.

As I've gotten older, I've gotten stiffer. My friends and I discuss the aging process, and I see it in them as well -- more aches and pains, increasing complaints, the real feeling of gravity taking its hold. I see how inactivity affects the human body. Those that move seem to have an easier go of things. And those that don't move as much seem less at ease in their bodies. I've also observed my yogi friends as they've aged. And there IS a difference. My yogi friends seem more at peace in their bodies and more graceful in their aging process. This inspires me.

This body is where I live for now. I want it to be a comfortable place for as long as possible. And I also want to continue to tap into that inner journey. Flexibility is not just about the external. As we age, developing inner flexibility is just as important.

My family and I left Mexico, but I did not leave my yoga practice on that beach. Back in my living room, I've rolled out my mat -- sometimes with my children alongside of me, sometimes with them crawling under me, sometimes with music, sometimes without. But the renewed and refined commitment is there. And with that commitment comes continuously unfolding rewards: challenges, breakthroughs, discomforts and bliss, each piece an opportunity to practice.