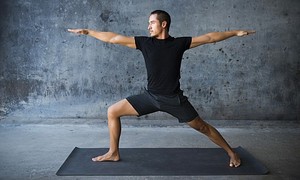 The Bureau of Justice Statistics has found that within five years of release, 76 percent of prisoners released in the U.S. reoffend. Breaking this cycle requires radical reforms in rehabilitation methods, and some surprising approaches are showing promising results -- downward dog and mantra chanting.

Educational and vocational programs already in place for prisoners are proven to help to reduce recidivism, but some facilities taking steps beyond those by offering programs that target wellness, such as yoga and meditation. Studies have shown teaching prisoners meditation and mindfulness can have positive effects on their behavior, and translates into further reductions in recidivism compared to prisoners who have only participated in traditional rehabilitation and educational programs.

The Prison Yoga Project is the most well known program of its kind. Started in 2002 at California's largest prison -- San Quentin State Prison -- the program has expanded to 24 states and several countries outside the U.S. More than 1,500 volunteers -- some of them prisoners themselves -- have been trained to deliver the program, which is taught in more than 115 prisons. Through it, more than 15,000 free books teaching meditation and yoga have been sent to prisoners. At San Quentin there is a waiting list to participate, and there are often waiting lists for the volunteer teacher training.

The mission of the Prison Yoga Project is to help prisoners resolve and heal from issues related to the traumatic backgrounds many of them come from -- backgrounds that may include such experiences as homelessness, addiction, bullying, sexual abuse, domestic violence and witnessing crimes. Indeed, the experience of prison is in and of itself is traumatic.

Yoga and meditation can effect behavioral change, offering an opportunity for self-reflection and increased self-awareness. With self-awareness comes increased empathy and compassion for others. Prisoners begin to learn emotional intelligence, self-discipline and impulse control. Using meditation as a tool can help prisoners disengage from conflicts, negative impulses and violent situations. It helps them to develop coping mechanisms to deal with the stressful environment of prison and the challenges faced after release. Yoga and meditation are known to reduce stress, improve attention span, and create a general sense of health, psychological wellbeing and mental clarity. Additionally, it has been shown to help relieve the symptoms of PTSD, and is effective in supporting addictions recovery.

Numerous personal statements on the Prison Yoga Program website testify to the positive effects yoga and meditation have had on prisoners' lives and outlooks.

"I used drugs and alcohol for many years basically to kill the pain of my life. Yoga has helped clear my mind, deal with the pain, move into the present and just love myself and who I am." J.B.

"Yoga and its emphasis on the power of a single breath has promoted for me a respect for life and a profound realization of the destructive force of violence." S.L.

"The demands of prison have changed me for the worse, but participating in this yoga class on my path to returning to society has helped me feel like a positive, capable individual once again. The practice brings me a more clear and enlightened mind." J.H

Several studies back up the changes these prisoners have witnessed in themselves.

• A 2012 study by Oxford University found that prisoners who participated in a 10-week yoga program experienced less stress, improved mood and concentration, and an ability to override impulse.

• A 2012 study of a 10-day Vipassana meditation (an ancient technique originating in India) program at an Alabama maximum-security prison showed improved levels of mindfulness and emotional intelligence for those who participated compared to those who did not. Another study on the Vipassana method concluded participants showed significant reductions in alcohol, marijuana and crack cocaine uses, as well as decreased psychiatric symptoms.

• A study done at Wake Correctional Facility in Raleigh, NC, found that prisoners who participated in more than four yoga classes had a significantly reduced re-incarceration rate.

• A 1987 study published in the Journal of Criminal Justice tracked released prisoners who had learned Transcendental Meditation. Sixty percent of parolees that meditated were still clean after two years, compared to 45 percent of parolees who did not meditate. The recidivism rate of meditators was at least 35 percent lower than for those who had received only prison education, vocational training, or psychotherapy but no meditation classes.

With indisputably positive outcomes, yoga and meditation programs should be available to in all prisons help fill out what is still missing in many -- a holistic rehabilitative approach that significantly improves lives both behind bars and beyond them, and alleviates the strain of repeat offenders on the justice system.