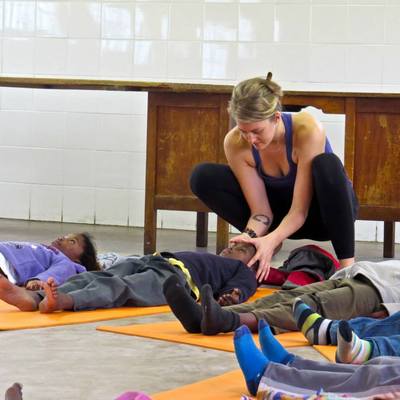 This is an interview with Philipa von Kerckerinck, who found a way to combine her graduate work in international development with yoga. She is the founder of Roots Tribe Yoga, a non-profit organization that brings yoga to children and young adults within Sub Saharan Africa, thus empowering individuals to create the changes that they wish to see in their lives and in their communities.

After serving in the US Peace Corps in The Gambia, West Africa, I knew that I wanted to continue to work in international development. I studied for my MA in International Affairs and Development at The New School, and, during a yoga teacher training course I took shortly thereafter, it struck me that yoga could be a very powerful tool for international (and individual) development. Africa, yoga, and working with children are all things I am very interested in, as well as international development. What motivates me still today is the fact that I can combine and streamline all of these interests of mine into one line of work, while being of service to--and having a significant impact on the lives of children and young adults.

Is there a standout moment from your work with Roots Tribe Yoga?

At the end of every class I leave time for relaxation. During this time the children lie on their backs and rest and acknowledge the work they've done by quietly connecting with themselves. During this time I always play the same song, a mantra sung by Deva Premal. On one of my last days teaching this particular group, I invited everyone to lie on their backs while I started the song. About half-way through the relaxation time some of the kids started singing along, more joined, and soon everyone was softly singing: "May all beings everywhere be happy and free, and may the thoughts, words, and actions of my own life contribute in some way to that happiness and that freedom for all."

What did you know about the population you are working with before you began teaching? What were some of the assumptions you had about this population and how have those assumptions changed?

I had had more than two years of experience working with children in Africa from my service in the Peace Corps. Children are children no matter where in the world they happen to be. An assumption I used to harbor was that certain concepts, such as interconnectedness or mindfulness, were too lofty or complex for young people to grasp. I've learned, however, that it's simply a matter of how the concept is presented. Frequently I see children picking up on these notions quite naturally, because it is natural. All that is needed is someone or something to foster and value these ideas; to allow them to evolve as the child grows into an adult.

I find that teaching adults in a studio class is a relatively predictable experience; you can have a plan, or an idea of what you would like to teach, and carry out that plan without extreme amounts of fluctuation. With children, however, you never really know what might happen, and its best to be prepared to forget your plans entirely and devise a whole new plan on the spot, depending on what the group needs. Spontaneity and creativity are essential to working with children.

I find the language barrier to be difficult. However, it is a challenge that I find intriguing and rewarding as it compels me to constantly discover new ways of delivering what I want to communicate. For example, from learning to speak Wolof (a West African tribal language) I came to realize that much of the yoga jargon, and the way I articulate certain concepts and instructions, are abstract and not easily translated into tribal languages which tend to be more concrete in diction. Hence, when working with children who's first language is not English, I try not only to tailor my explanations, but also to create ways in which the class may embody and experience the themes first-hand. Certain group poses, for instance, are a good way to demonstrate that each person plays a significant role, as everyone must work together--sometimes literally leaning upon one another--in order to achieve the pose.

The best advice I could give to someone working with a similar population is keep a sense of humor. Of course, the end goal remains in sight, and it is important, but when you become too fixated on attaining the goal--on the outcome of the practice, rather than on the practice itself--the magic of the yoga disappears. When this happens, the benefits of the practice decrease dramatically. Working with children, and working in Africa, both take a fair amount of patience simply because plans often unfold in a way that is utterly unexpected. Learning to cope with this is in itself a practice--it is the practice. It means learning non-attachment, and working with what you have been given, rather than what you expected. It may be 100 children when you expected only 20, it may be a soccer field to practice on as opposed to a cleared out classroom, there may be no translator, and so on, the possibilities are endless. This is yoga--it is the kind of practice that starts on the mat, and soon leaks out into life--and it all begins with keeping a sense of humor.

What are some of your ideas about, or hopes for, the future of yoga in South Africa in the next decade?

Yoga offers an enormous array of benefits such as: individual empowerment, physical and emotional health, heightened self awareness, increased mindfulness, and a plethora of educational benefits--too many to list here. My hope, therefore, is that yoga will continue to spread beyond the major cities, and into the far reaches of the rest of the population, including every interested person of the townships, suburbs, and rural areas. Moreover, I hope that yoga will bring a deeper sense of unity to the people of South Africa, Africa, and the world at large.

This work has made me realize that, for me, service, yoga, and practice, are all closely intertwined. People often define yoga as asanas or physical exercise, but there are many forms of yoga that can be practiced both on and off the mat. My definitions have changed in that I no longer see them as separate notions: the work is my yoga, the yoga is my work, and all of it is done in service to others, including myself, and, ideally, everyone I come into contact with.