Yoga, very literally, saved me. For a long time the yoga mat was the only place I felt not only alive, but also willing do what I needed to do to keep living. As my body got stronger, and my mind clearer, I could, for the first time in my life hear the whispers of a calling that had previously eluded me. I knew that I had to share the healing power of yoga with others like me. So, I studied, I practiced, and I began to answer the call.

I became aware of the full spectrum of people who can benefit from yoga well before I'd ever opened a studio, and before I'd experienced the huge physical transformation of pregnancy and childbirth. While practicing one day at a studio in Tacoma, WA, I looked around the room and was struck by the variety of body shapes and types, all in the same posture, but looking completely different. Out of about 30 people in that room, perhaps two of them looked anything like the yogis that frequently grace the covers of glossy yoga magazines. (I was not one of them.) This is not to say that only two people in that room were beautiful. Quite the opposite, in fact. Every person in that room was beautiful in their own way, and more importantly, glowing from the shared practice of yoga.

As I became more established in my career as a yoga teacher and began specializing my teaching towards persons of varying physical, emotional and mental abilities, I became acutely aware of how underrepresented the average yoga practitioner is in both mainstream media and within the media of the yoga industry.

I began to teach five key groups of people:

• People of all ages who had been diagnosed with neurological disorders, such as Multiple Sclerosis

Within these groups there were great variations in ability as well as a great deal of overlap between groups. At the same time I was also teaching "regular" folks, and the same was true for that group. Many of the people in my "regular" yoga classes could have easily been in a specialized class. The thing that members of all of the groups shared, no matter their physical or mental ability, was a belief that they were not representative of the average yogi or yogini. The more I taught and practiced, the more I realized that society's perception of the average yogi is not at all accurate. There are thousands of dedicated practitioners with bum knees and c-section scars and flabby arms and imperfect skin.

In our culture we idolize a seemingly perfect appearance but as we are all aware, this ideal is unrealistic and impossible to achieve for most of us. So then why is it that when the word yoga is mentioned, the first image that pops into most people's minds (including those who practice yoga regularly) is of a thin, flexible, beautiful and more-often-than-not white woman? How has yoga, which is at its very core about recognizing the shared nature of all things, fallen prey to society's obsession with perfection?

The answers to those questions are indeed very long and layered and there are people better qualified to answer them than I am. But as a yoga teacher with over 1000 hours of teaching experience to a very wide variety of people, I feel I can speak to the effects of this misrepresentation on the average yoga devotee.

When I co-founded Samdhana-Karana Yoga, a non-profit yoga studio in Tacoma with my co-founder, Pamela Higley, our desire was to create a space where everyone would feel comfortable exploring and practicing yoga. We wanted a healing space, free of expectations and pressures. Pamela and I are indeed good examples of exactly the people we wanted to make comfortable. We are, neither of us, a size 0 (or 2 or 4). We both have a few injuries which limit our mobility at times. Pamela, a veteran of the U.S. Army, was diagnosed with Multiple Sclerosis in her 20s. I was diagnosed with PTSD, also in my 20s. When we opened the studio, Pamela had given birth to and breastfed two children. I have since given birth to and breastfed two as well. This is all to say that we are two very normal women with stretch marks, well-used breasts, and stories of loss, pain and triumph.

The mission of Samdhana-Karana Yoga is to make yoga accessible and available to persons of all incomes and abilities. When our doors opened on September 15th, 2010, we were beyond thrilled with the response and support from the community. Our students very often commented on how pleased they were to be able to a) afford to practice regularly and b) attend classes where they did not feel completely inept and insecure about their perceived deficiencies.

To be clear, I think there are many yoga studios that are welcoming to students of varying abilities. As both a teacher and a student, though, I have observed that no matter how many times a teacher reminds students to work at their own pace or that where they are in their practice is exactly where they are meant to be, the tendency to compare and compete is irresistible. It seems that no matter the message students are being sent from their individual yoga teachers, the message from society-at-large is louder and more rapidly internalized.

This message is one that promotes an unrealistic and unattainable ideal of bodily perfection. It is one that reinforces shame and embarrassment about healthy and normal bodies. It is one where young girls especially are programmed from very early on that in order to be accepted and liked they must conform to generally accepted ideals of what is beautiful. Beautiful very often means thin and stylish. Within this framework there is no place for people who fall outside of this ideal. Unfortunately, outside of the ideal is where most of us reside!

These unrealistic expectations coupled with an insatiable desire to achieve the unachievable leads to low self-esteem, depression and a lifetime of feeling not "good enough." Americans consume cosmetics, hair products and surgical procedures at alarming rates. The amount of money spent annually on cosmetics alone in the United States is $38 billion. That's billion, with a B. Just as alarming? The estimated amount of money spent on yoga products is $27 billion. This begs the question, is Yoga becoming part of the problem rather than the solution? Is it becoming yet another thing to consume in an effort to fit in, to be beautiful and to find acceptance? And if so, for how many people who desperately need the healing yoga can provide -- people like me -- does it feel inaccessible?

As a person who is just as vulnerable to society's expectations as the next person, I feel compelled to tell others what I see every day: Yoga is for everyone. I have long admired Dharma Mittra and like many yoga students and teachers have spent many hours studying and marveling at his famous Master Yoga Chart of 908 poses. His years of dedicated practice, and the results thereof, are an inspiration to all of us. I've had this idea for a few years now that I'd like to recreate Dharma Mittra's Master Yoga Chart with photos of yogis of all shapes and sizes and abilities. I've wanted to show yogis who are tall, short, fat, thin, beautiful, quirky, clean-cut, tattooed, able-bodied and physically challenged. Yogis with scars, birthmarks, stretch marks, cellulite and love handles. Yogis with stories, traumas, losses and triumphs. Yogis who are glowing, confident and vulnerable. It hasn't come to fruition yet, but I'm not the only one who is thinking along these lines. There are projects, such as Yoga & Body Image Coalition, and books like this one, that are all trying to change the message: Yoga is for every person, every body.

Dharma Mittra's intent was never to set the standard for what a yoga body should look like or be able to do. Rather, his true legacy is one of devotion to one's practice. Not all of us can dedicate our lives to yoga as he has, but we can all do every yoga posture to our best ability. Not every person who is devoted to their practice will develop the physical abilities of Dharma Mittra, but every person who is devoted to their practice can achieve something far more valuable - acceptance and perhaps even love for who they are, inside and out. 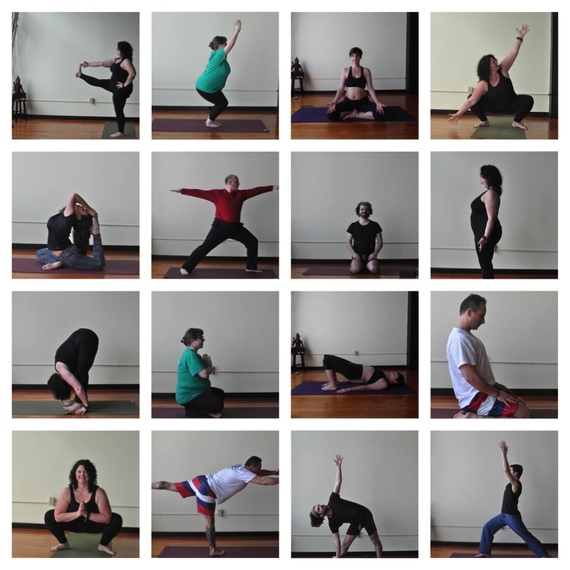