I recently attended a two-day workshop with a world-renowned yoga teacher...whose name I'm sure you do not know. Even though he is something of celebrity in the yoga community, especially the Ashtanga yoga community, his fame is limited thusly. Not that being famous matters, per se. But the fact that most of the non-yoga-practicing public probably has no idea who Tim Miller is reminds me of how yoga has not yet made it to the mainstream.

Sure, most of us are aware of yoga on some level. We know that Madonna and Gwyneth practice (or practiced) yoga (although lately we've been hearing a lot about their gym workouts and seeing a lot of photos of Madonna's arms, which look like they could provoke feelings of inferiority in nearly any man I know). We've heard about Sting and Trudy and all of that which yoga has done for them (read: their sex life). The tabloids reported that yoga played a role in Jen Aniston's recovery from her (former) John Mayer-related heartbreak. And we all know of mere mortals (such as myself) who practice yoga (and talk about it incessantly)

However, many non-yogis to whom I reveal that yoga is my sole "intentional" workout (as compared with what I refer to as my "incidental" workouts, such as gardening, bike riding, housekeeping and downhill skiing) react with comments along the lines of, "But what do you do for cardio?," or conversely, "But don't you ever lift weights?" Others tell me that they could never practice yoga because they have "no patience" or "no flexibility," or "no tolerance for chanting "OM" when they should be exercising".

Om, how wrong they are.

So, why don't we just debunk all that yoga bunk right here and now, once and for all, and get you to the mat where physical fitness and enlightenment await you.

Yoga Bunk 1: "You have to be flexible to do yoga."

Not only do you not have to be flexible to do yoga, but in fact, it is far better if you begin yoga with a lack if flexibility. Lacking flexibility, it will be difficult for you to overstretch to the point of injury. Lacking flexibility, you are most likely gifted with some level of muscular strength and stability. That strength and stability will become your tool for slowly, steadily gaining flexibility without injury. Thus, you will be able to stretch one muscle while supporting it with another, rather than collapsing into the stretching muscle.

Ultimately, you WILL become more flexible if you practice yoga, just as you will become stronger. So, starting with the bar set low, you will see improvement faster, which could prove to be motivating.

Believe me when I tell you, I did not start out with any flexibility at all. After years of running, my hips and legs were so tight that I could barely sit comfortably. Now, I'm doing this: 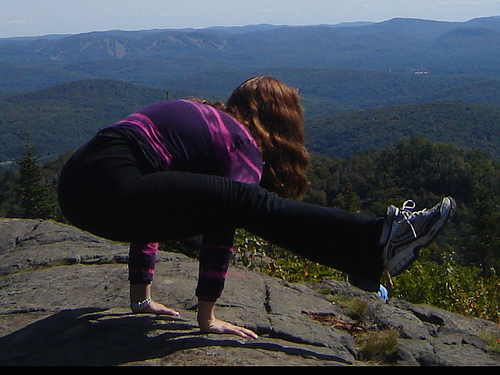 Bottom line is: you don't have to be "stretchy" to start practicing yoga, but you definitely will get that way if you do.

There are many different forms of yoga out there. If you wish to practice a form of yoga that will raise your heart rate and cause you to sweat through several layers of clothing, then you should seek out classes that are called, "Vinyasa" or "Flow" or "Power Yoga" or, my persona favorite, "Ashtanga". These forms of yoga tend to begin with 10 to 20 minutes of what I can only describe as "enlightened squat-thrusts": Bend down, touch the floor, jump your legs back, lower into a push up, press the hands down until the chest lifts back up, press into the soles of the feet to come into down-dog, then jump the feet between the hands and start all over again. That is followed by 25 to 45 minutes of moving quickly from one posture to another, with more of those "enlightened squat thrusts" thrown in between And by moving quickly, I mean that by the time you have put yourself into the pose, you are already coming out of it and into another. This, the "standing" portion of class is followed by backbending, where you are asked to lie on your back and push up into an arch, hold it for five to 10 breaths, then release your head down for a moment and push back up again. By the time you finish with that, you are DESPERATE for the opportunity to lie on the mat and do your "finishing poses", which it turns out, are not so relaxing. Most of them involve some level of being upside down, if not being outright inversions, like headstand. Finally, class ends with a couple of minutes of lying on the mat and breathing. After 60-90 minutes of all of that cardiovascular exercise, you will relish the "shavasana" portion of class.

So, if you don't believe me, then I dare you. Go take a vinyasa class. Let me know if you still want to go running later. If you do, I'll join you. But give me ample warning, because there's no way I could run on a day that I took a vinyasa class.

Yoga is my only consistent workout now, and has been for the past six years. And I am in better physical shape than I was when I used to run 50 miles per week. And check this out. If yoga weren't a workout, would I be able to do this? 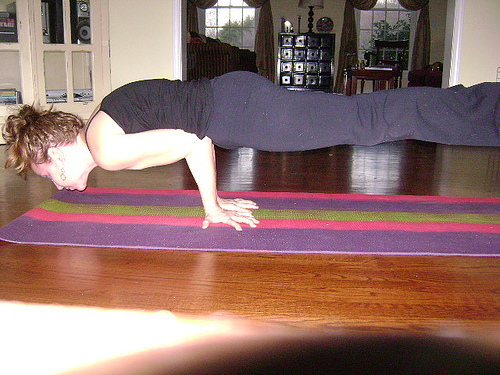 Hello? That's why you need the yoga.

One of the goals of yoga is to quiet the internal noise that addles the mind. The act of practicing yoga helps to achieve that goal. You start moving through the poses, and you literally can't focus on anything but what you are doing with your body. If you're not calm now, do some yoga, and you'll see a difference, at least while you're practicing. And if you keep practicing, you will learn to take that calm with you off the mat.

Yoga Bunk 5: "I'm not spiritual enough to do yoga."

Most people who practice yoga in this country practice it in a gym setting, and they do so for the workout. Practicing yoga might enhance your current level of spirituality very very gradually. First, you may enjoy the feeling of calm that the yoga imparts and you may seek to cultivate it off the mat. Then you may notice that being calm imparts calm in others. That may lead you to begin to notice the connection between all human beings. It may even lead you to consider how it is that we are all here on this earth together. That may draw you toward some level of allowing yourself to toy with the notion that a higher power must exist. You might find yourself connecting more deeply to your own religion.

Or you might not. You might continue to practice the yoga just for the amazing physical benefits, or maybe because it just makes you feel so good. 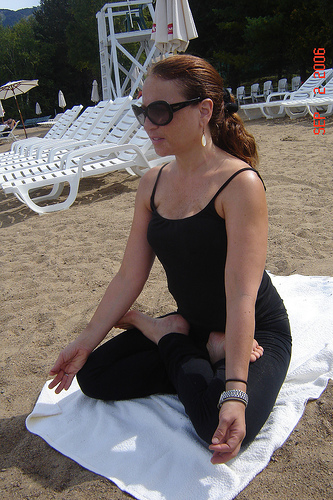 It really doesn't matter either.

What matters is that you don't have to start out flexible or spiritual. You don't have to start out convinced that yoga is right for you. But if you are lucky enough to get past all of these preconceived notions about yoga that seem so prevalent and to take yourself to a yoga class -- a good one, one that is recommended to you by a friend who knows what it is you are looking for -- then at least you will get to see for yourself... that all that bunk about yoga is just that: bunk.