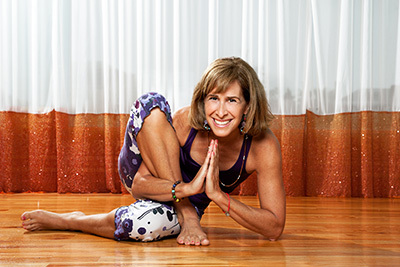 This is an interview with Debby Kaminsky, a former advertising executive who decided in 2006 she wanted to sell the benefits of transformation. She took her first yoga class in 1997 while her twins were in pre-school. She felt great and never turned back, becoming a yoga instructor in 2004. Her passion is helping to manifest positive change. In 2009, she founded Newark Yoga Movement, a 501(c)3 that has shared yoga with 14,000+ students, 1,400+ educators, and the Newark community, including firefighters. Debby serves as Peace Ambassador for the Global Mala NJ. When traveling, she finds ways to share yoga, and has proudly taught in Kenya and Tanzania, and the military in Israel.

I'm motivated to teach firefighters and children; teaching firefighters helps reshape community, and children who learn yoga can gain tools to thrive in some of the more challenging areas of our country. I started Newark Yoga Movement because I knew that using yoga to "enhance curriculum" would be beneficial to children academically and personally. My model links teaching children in "required" environments, such as entire schools, to reaching out to all who can positively influence children, like the firefighters. Newark's Fire Department is NJ's largest, so if we could teach those first responders through "required" training sessions, we could help them on and off the job, and positively influence children.

Is there a standout moment from your work with fire workers?

Let me start by saying the fire department is the most polite group of public safety figures I've ever met; still the mindset of many firefighters is "why change?" and introducing yoga wasn't 100% embraced. After one session, though, most were converted. In an informal survey this September, 84% said they enjoyed yoga and 74% felt the fire department would benefit from a continued program.

A standout moment for me, I think, is watching the Fire Director practice yoga with his recruits, and then lead yoga in front of 750 people at Global Mala NJ 2013.

What did you know about the population you are working with before you began teaching?

I sensed firefighters were highly stressed and could use detachment techniques to better function in civilian life. I certainly know how stressed and scared I would be in this job. The Fire Director and Union President confirmed my hunch: stress is the number one cause of death among fire fighters, not fire itself. Firefighters also quickly taught me how important flexibility was for them to better twist and fit into small spaces safely. Firefighters are called "the bravest" for good reason.

As a vinyasa teacher I was used to teaching in studios with nice ambiance, props, mats, and experienced students. My first class with the firefighters occurred on the training center's concrete floor without mats and endless sirens and car horns in the background. Lesson One: keep it simple and slow. Teaching thousands of kids has helped here. With so many newbies, it's important to meet people exactly where they are and keep them safe. I move much more slowly than in a studio, and spend more time on alignment. That said, in the end it is really all about the breath, and not about the perfect yoga pose. I encourage firefighters to try their best and always pay attention to their breath, because that is the beautiful "turn on" to reduced stress and anxiety.

Lesson Two: practice your own yoga, so that you practice having a flexible mind and sharing that with others. Although I won't discuss Hindu deities in classes outside a studio, I will share universally appealing Sanskrit words like "Namaste," that I interpret as "I see the good in you, you see the good in me, and we see the good in each other." Sometimes we sit quietly instead of in savasana. I've learned to turn annoyances, for instance, sirens, into positives, and encourage all to do the same.

I'm keeping this answer focused on the firefighters, although you can imagine the challenge in teaching inner-city pre-k- through 12th-grade students! My greatest challenge with the firefighters is how to make myself, a 5'6" female relevant. I often use humor. I use anecdotes relating to being at the fire or after the fire, and tie them to the poses we practice. I admit I gain respect quickly when I move into the low push-up chaturanga before they join me. With all their fitness, this is a new kind of strength. They find yoga surprisingly hard and different from anything they have done before.

For starters, no matter what population you teach, I always recommend doing your homework to find out what exists, and any gaps. For me, I found a firefighters yoga DVD, and saw that some fire departments--especially after 9-11--had some yoga. However, I didn't see a fire department bringing yoga to their training, especially one the size of Newark's. Next, always build consensus. Fire departments have many levels of command, so do your best to get the green light from all of them, including the union. Always keep it simple and interesting. Engaged firefighters will be your biggest fans.

What are some of your ideas about or hopes for the future of "service yoga" in America in the next decade?

I believe that every human being should practice some form of yoga, and that anything we can do as yoga guides to manifest this is a good thing. Our world will be a much better place. I'd like to see yoga movements following Newark Yoga Movement's model all over the country, and it's actually happening. I can't find anything more rewarding then giving back. Once people tap into their true selves, they tend to find that they are most fulfilled in helping others. In the next decade, I'd like everyone to make practicing a few minutes of yoga a day as much a habit as brushing your teeth.

Service is "the action of helping or doing work for someone." All my work has shown me that the someone is oneself, as well. The word 'yoga' for me is an acronym I created for "You Only Get Awesome," and I think that resonates with many. My practice no longer needs to always be physical. If I am consciously breathing, I am quite content.

What other organizations do you admire?

I admire many organizations that all have a common theme; they show results. I'm impressed with grassroots organizations that quietly create change. My friend Eddie Stern organized a non-profit for Hurricane Sandy. He distributed thousands of dollars, and brought endless supplies and love. My friend Sharon Manner started Ashrams for Autism and is making an impact with children on the spectrum. I respect the tremendous research being done at Kripalu's Institute for Extraordinary Living. Finally, I'm impressed with the Give Back Yoga Foundation, especially its work with Veterans.