When Jacob Bender of Dillsburg, Pennsylvia was 14, during a routine exam his doctor noticed that curves were forming in his spine that were consistent with scoliosis and that were concerning. Jacob had two curves. The upper was 90 degrees and the lower 75 degrees. Most scoliosis surgeons agree that children who have very severe curves (50 degrees and higher) will need surgery to straighten the spine and prevent existing curvatures from worsening.

Surgery is recommended because if scoliosis becomes severe enough, it can cause back pain, impact the lungs by impairing breathing, and sometimes make walking a nearly impossible task.

"I really didn't want an operation done on my back," says Jacob, now 18 years old and looking forward to college. "What if they did it and then something worse happened?"

For me that was a reasonable question. As many as 38,000 surgeries, many of them fusing spinal vertebrae together and/or inserting a metal rod, are done annually. And it is well known that these surgeries can cause patients to experience serious later consequences, such as degenerative joint disease.

I also worried about Jacob's self esteem. Many adolescent patients are subjected to grueling exercises and burdensome bracing for as many as 23 hours a day. They feel apart from their peer group at the very moment they need to feel they belong. Loss of self-esteem and feelings of helplessness are also a problem for older patients whose curves can become deforming.

But word-of-mouth changed Jacob's situation. A yoga teacher at the local YWCA told his mother about a technique I had invented -- just a couple of minutes of yoga a day, a couple of specific poses -- to reduce the curves of scoliosis and relieve patients of the necessity of awkward bracing, lengthy exercises, or worst, a difficult and expensive surgery with a long and fraught recovery. Jacob and his mother came to my office in New York and learned the side plank.

Within four months his lower curve was reduced by 21 degrees, taking him almost out of the surgical category. He is continuing the side plank, and the family is now looking forward to returning to see me to work on more-recently developed yoga poses, including the Half Moon and variations on it, that I have clinically shown can reduce the upper (thoracic) curve.

I was also overjoyed to watch the side plank treatment work for a feisty little 8-year-old girl from Long Island, NY, whose curves were severe enough that bracing for hours every day was being considered. That sweet little girl learned the side plank and half moon with her mother's help. Her curves went from 28 (upper) and 20 (lower) degrees to 23 (upper) and 15 (lower) degrees in a four-month period. She avoided the difficult bracing.

Though these kids had to deal with their scoliosis, neither they nor their parents could explain its origins. The cause of most scoliosis is unknown. Typically it occurs in girls older than 10, and it can run in families. It can involve one curve, a "C" curve, or two curves, an "S" curve. While it is most common in children and adolescents, many adults also have serious scoliosis that has worsened from childhood or developed later. It is also associated with osteoporosis, or bone loss, which is a condition that often develops as people age.

"My doctor wanted to do surgery, but of course I was reluctant. First I went to a chiropractor who recommended the "clear" method. That would involve my doing exercises for three hours every day for the rest of my life," says Sarah Jannsen, 51, a psychotherapist in Hillsboro, North Carolina. That possibility seemed oppressive; she searched for other options.

Sarah's father found and gave her a newspaper article about my technique and she read the clinical trial on which the article was based. "At first I couldn't make sense of it," she says. "I think I was doing it wrong." But even so, she felt she could help herself with yoga.

Sarah came to see me, and we had a teaching session during which she understood the poses appropriate for her S curve. Her curves, measured by an independent radiologist, diminished significantly -- 9 degrees for the lower and 10 degrees for the upper during the next year. And she is still doing the poses, which she says are "inspiring a lot of hope for me." 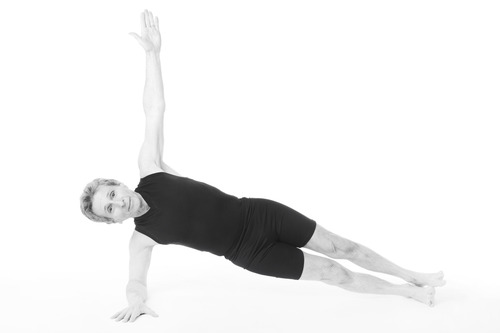 There has been skepticism and confusion about my original peer-reviewed clinical trial that had such exciting results, reducing idiopathic scoliosis curves for adolescent and adult patients an average of 32 percent in two months of doing the yoga an average of 1.5 minutes a day six days a week. I am continuing to work on yoga for scoliosis for both young people and older people and to treat them with yoga, because I have watched first-hand how this innocuous, inexpensive, rapid treatment has improved their lives.