Body image anxiety -- whether it's a fixation on a facial flaw, an obsession with calorie-counting and exercise, or general negative feelings about your appearance -- can be all-consuming, and they can take a serious toll on your well-being and self-esteem. When it comes to dealing with body insecurities and negative self-talk, sometimes the best thing can be to get out of your own head. Yoga, which is now being offered in some schools as a stress-relieving practice, can also be an effective way for young women to develop a positive self-image.

"Yoga allows us to start to slow down the self-critic, and start to observe that this voices in our heads isn't necessarily the reality," Vyda Bielkus, co-founder of Health Yoga Life studio in Boston, tells the Huffington Post. "To slow down and get into the body and say 'OK, when these thoughts are coming up, there's something actually behind the thoughts that we're observing' -- that connects us more to our true self versus the dialogue that may be running us."

Beginning a yoga program during your high school years can help you to start listening to the wisdom of your own inner voice, and to realize that your voice matters, Bielkus says. Whether it's peer pressure from your girlfriends or pressure you put on yourself, yoga can help you to find comfort and resilience by looking within and finding your own path.

1. Let go of your need to be perfect.

"Practices yoga helps people of all ages to create that space from all the media images that we're constantly bombarded with, and the negative self-talk that can come up from that," says Bielkus.

So much of eating and body issues have to do with the need to control, whereas yoga is about cultivating the ability to let go, Bielkus adds. Silencing the mind and focusing on the breath and the body can help you put a stop to the dangerous habit of perfectionism and to simply appreciate all the good things your body does for you.

"Women have so many expectations of themselves," Bielkus says. "We're constantly bombarded with unreal expectations that everything should be perfect -- I should look perfect and I should be accomplishing it all with ease. I think yoga allows us to take a break from all of the chaos... and start to say, 'I have a need to be good to myself and slow down, and as I'm able to show up for myself, I'm more able to show up for others.'"

2. Get active without an emphasis on competition or losing weight.

Some new practitioners may initially be attracted to yoga as a way to achieve the type of body they want, but they'll quickly realize that there's a lot more to the practice than getting into shape -- and in fact, this isn't the main objective at all. For those who are recovering from an eating disorder or struggling with body image issues, yoga can be a great way to stay active without focusing on competition or calorie-burning.

"I often say in my own classes, 'Why we start yoga is not why we stay,'" says Bielkus. "Yoga... helps us connect to an inner spark that we can honor. That's really what keeps people coming back to their mats -- more inner awareness, more stillness, more peace in their life. Then that supports healthier choices off the mat."

Having body-negative friends can take an even greater toll on your body image and self-esteem than the media, according to a 2012 study that linked peer competition to poor self-image. Attending local yoga classes are a great way to have fun with like-minded friends and to build new friendships that don't involve competing over physical appearance.

"Yoga allows teens to plug into a community of people who might be a healthier alternative to what's available to them," says Bielkus. "It's also less competitive than an athletic sport, because at yoga we de-emphasize competition and we're talking about self-acceptance."

If you've been struggling with body image, it's possible that you've internalized negative body beliefs that you're not even aware of, like an assumption that your weight keeps you from being attractive to the opposite sex, or an idea that you should never to eat more than your friends do. But yoga allows us to pause and silence the mind for long enough to observe our beliefs and habits -- and to change the ones that are no longer helping us.

"It allows us to notice what beliefs drive our behavior," says Bielkus. "We make these beliefs at a very young age -- we sort of decide on our worthiness, if we're lovable, how we're perceived by others -- usually in childhood, and then those beliefs drive us to action. Often as we go into adulthood, we're still carrying those beliefs, and they really don't serve us anymore."

5. Relieve stress than can lead to poor body image and eating disorders.

Stress and body images issues are often a vicious cycle: When we're stressed out, we may become more self-critical about our weight and eating habits, and in turn, a preoccupation with food, exercise and physical appearance brings more stress into our lives. According to a recent University of Michigan survey, 20 percent of college women say that thoughts and fears about eating and weight dominate their lives.

Not only can yoga help promote self-acceptance, but it's also been proven to relieve stress. Calm-inducing resting poses can be particularly helpful for easing a mind that's busy with negative thoughts, and Bielkus recommends gentle heart-opening backbend poses (like camel, bridge or wheel) for cultivating a positive relationship between the mind and body.

Tell us: Would you ever try yoga as a way to deal with body image issues? Share your thoughts in the comments or tweet @HuffPostTeen. 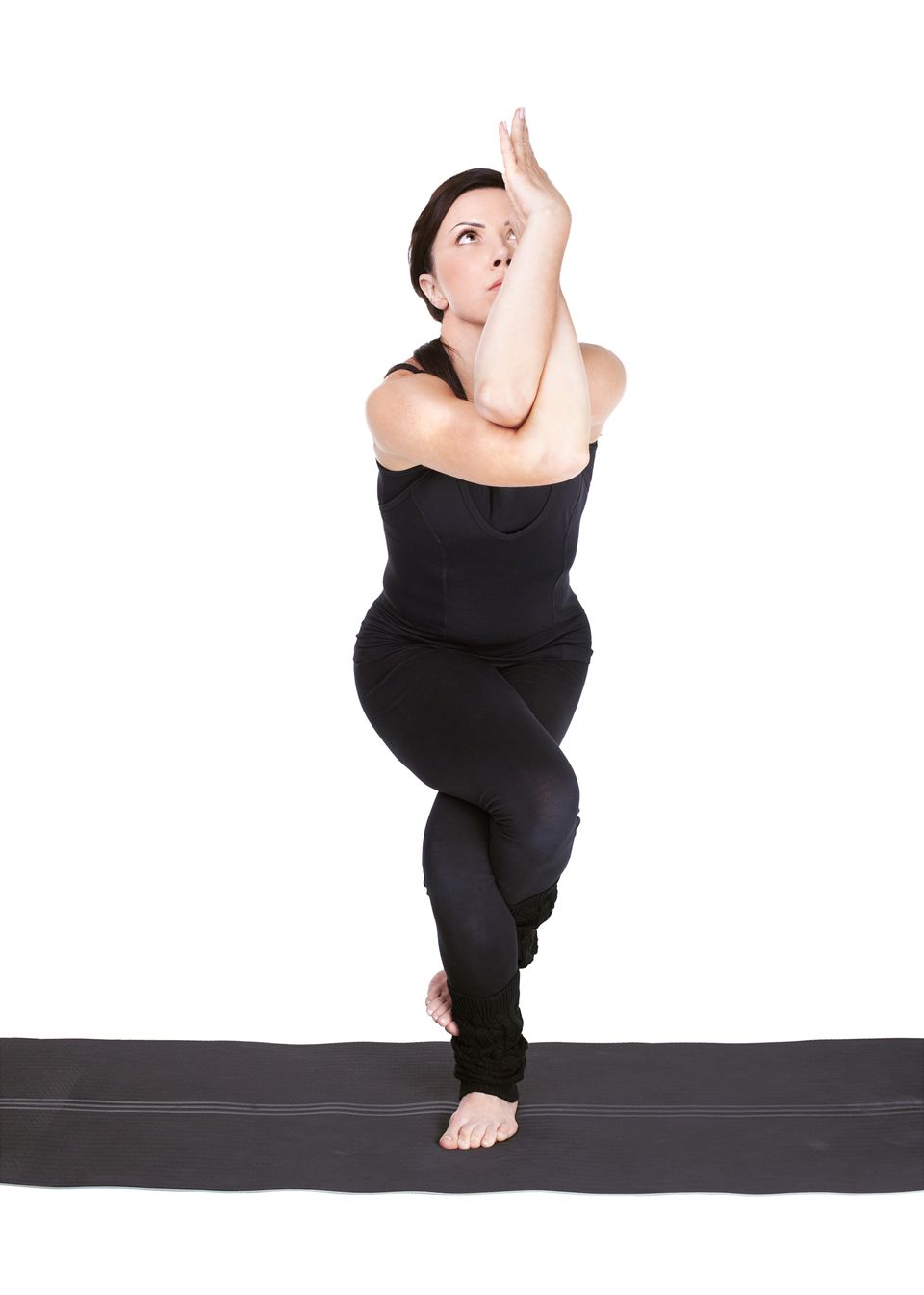 1 / 10
Eagle Pose (Garudasana)
"The symmetry we experience in practicing balancing poses helps us turn away from the mind's business and towards the body's recalibration and healing," says Brower. The Eagle Pose can be particularly beneficial for quieting the mind and bringing the attention to the body. Try holding standing pose for 30-60 seconds on each side.
Shutterstock