In town to promote his new yoga DVD, "The Blissology Project: Yoga, Meditation and Lifestyle," Canadian yoga teacher and, yes, Blissologist, Eoin Finn found time to sit down with me to talk about yoga and surfing. Surprisingly, I also learned about Joseph Campbell and Japanese real estate. 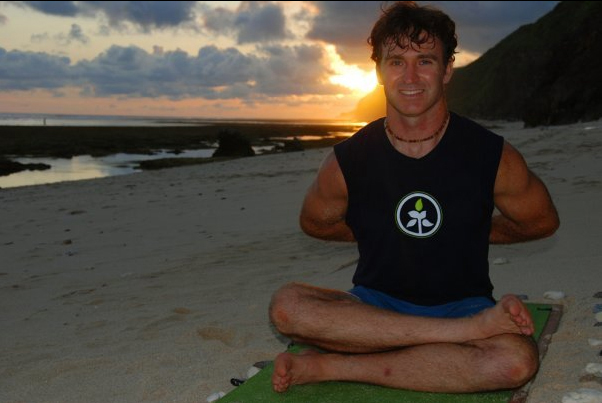 Liz Markus: What is Blissology?

Eoin Finn: The art of tuning into something big. Trying to let it guide you through all your relationships, with your body and mind, personal relationships, communities and nature. The attitude with which you do the physical yoga practice sets the tone for all the other relationships that you have in your life.

LM: I could see that.

EF: It's really hard, and yoga forces you to do it. Otherwise you'll get injured. So eventually you're going to get this lesson of, "I really need to listen to the feedback in my own body and try and reach my goals, but without going around that."

My major hero is Joseph Campbell.

EF: When I was first about to go to university in 1987, he released a PBS TV series with Bill Moyer called "The Power of Myth." He basically studied all the art, philosophy, religion, myths and cultural stories around the world and said if you look at all these themes and take away the cultural context, there are only five or six themes that keep getting repeated. And he tried to give you a skeleton key for myths of your world.

EF: His phrase was, "Follow your bliss and doors will open where once there were walls". Basically, everyone has something inside them that lights them up. How do you know? Their complexion changes, their body language changes, they completely change when they talk about this passion. If you really are doing what you want to do passionately, then even though it seems impossible, it's almost like the world conspires to make this vision come out.

LM: What drew me in to your DVDs was the surfer thing, because I knew what the surfer mentality was very chill. You don't lecture. You talk about connection to the ocean, and I think people can relate to stuff like that.

EF: I tried really hard not to preach because my message is just to inspire.

LM: How did you find surfing and yoga?

And that's how I got into surfing. There were years where I didn't live by the ocean, so I didn't surf, but I really fully had the bug.

And all that comes back to Joseph Campbell. He lit me up for this stuff right when I was deciding what courses to take. His message is that the ultimate energy source in life is transcendent energy. All you have to do is quiet your mind and get in touch with this energy source, and you will get there. That really spoke to me. I learned meditation, tai chi and yoga. I would never say I was a serious student of any of them. I was barely serious in school at all because I was really addicted to windsurfing. So my first three months of school, I didn't even rent an apartment. I said, "I'm not paying rent. I'm gonna pay tent." I bought a tent, and I would just wake up on the beach every morning and do my thing and then go into it.

LM: That sounds like perfect training for who you are now.

EF: Yeah, it is. I had some wrong turns, too. My original dream was I wanted to become a philosophy professor. I really wanted to teach the philosophy of love at a university level.

I looked at the older generation, and I'm like, they have a good life, but man, there's so much jadedness that comes with age. If I taught the philosophy of love, I could just be around young, idealistic people, talking about this thing that lights me and other people up, and I could have the summers off to go surfing. So that was my goal. And then I met a girl who went to Japan to teach English. I moved to Hawaii, and then I was like, "God, I miss this girl."

So I moved to Japan, and I really lived, breathed martial arts. And then one of the guys I was training in karate with, his dad was a developer. I priced out this subdivision for these people. I had dreadlocks at the time, and I cut off all my hair, bought a couple of suits and a plain ticket back to Japan and did a presentation in a boardroom in Japanese and got the deal. The next thing you know, I'm a house builder in Japan, and I wasn't following my bliss at all. I was actually following social expectations. All of a sudden, my relationship with my dad and that whole generation totally changed.

They used to say, "What do you do for a living?"

"Well I'm a windsurfer, philosophy student. I want to be a philosophy professor."

And I'd say, "I build houses in Japan." I'd get all this respect, and I went that direction for three and a half years, at least. And finally I just woke up. I can't be motivated by money. So I just stopped and said, "Where was I before this all happened?" I was just living my dream. So I moved back to Hawaii and said I'm not going to do anything in my life that's not inspired from my deep passion anymore. I've had both experiences and it's true -- you can make all the money you want doing something you're not inspired by. 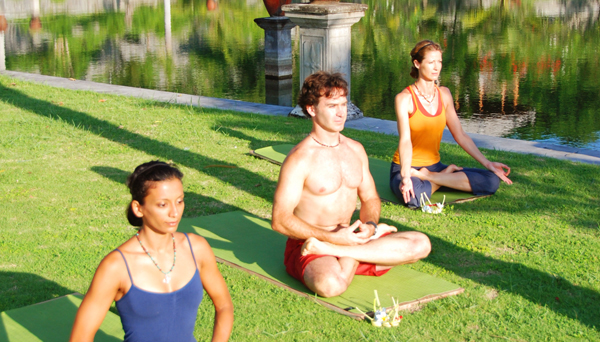 Back to the yoga thing, there's a few different ways of being a teacher, and one of them is mechanical -- you have the perfect alignment. But there's nothing that's really flowing through you. You're not a conduit for something.

And I think creativity is a lot like that. You have to surrender to something to really let this go through you, and that's what I feel I do teaching yoga. My new definition for yoga is "the art of getting out of your own way."

EF: If you see that documentary ["Dogtown and Z-Boys"], you saw how the old school skateboarding was very stiff and rigid, even their dress and everything, and then they just let it go.

LM: Every time I see them do it, I get goose bumps.

EF: This thing I call superflow is about getting off of the grid, and just really letting in these types of shapes and doing more fluid and explosive things.

LM: When I do your classes I feel a connection to those sports, and that kind of energy and freedom. I want to know what it feels like to go up eight feet past the half pipe, and I'm probably never going do that; but when I'm in those poses, there's a connection to it. 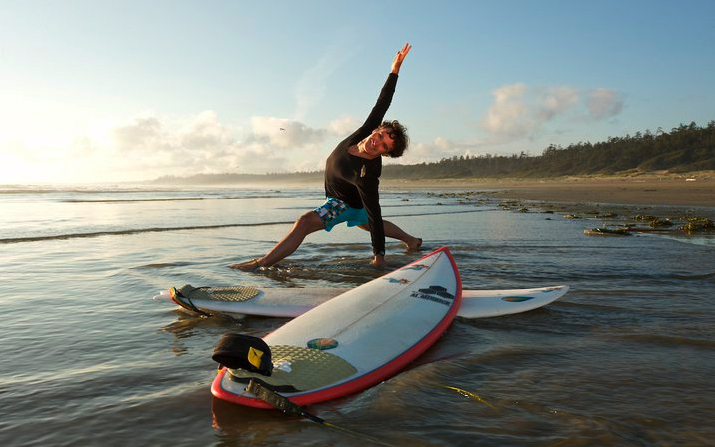 I never want it to be over the top, or contrived, or bottled. When I was younger I did get caught up in, "I want to do all this extreme stuff and practice for, like, three, four hours a day," and with age I'm like, "I just want to be able to surf really well." There are deep, spiritual, soulful reasons why I do yoga, but on a physical level, it really allows me to move well now and when I'm older.

LM: Tell me about the Y.E.S. [Yoga Surfing Ecology] retreats you do in Bali.

EF: I just want people to feel one one-hundredth of what I feel when I'm by the ocean -- that everything is connected. And that's what we're trying to make people feel. I feel that when I'm at the water.

Our oceans are such a bad mess. I think that the ocean has an extra big problem because it's just out of sight for most people. It's a classic out of sight, out of mind.

If you can combine yoga with a connection to nature and community, then it just becomes amazing. For those retreats we take people surfing. We take them to beautiful spots, they learn to surf -- which is great, because it gets them out in the water, learning something new -- and then we bring in a marine biologist to teach people about the ocean.

LM: Really? Does everyone leave depressed?

EF: No! I actually don't want to depress people. I really want people to feel the magic of the ocean. I told you about all the bad stuff that's going on, but really there's a lot of magic in the ocean, and all you have to do is just look inside a tide pool. What's inside a tide pool is just mind blowing.