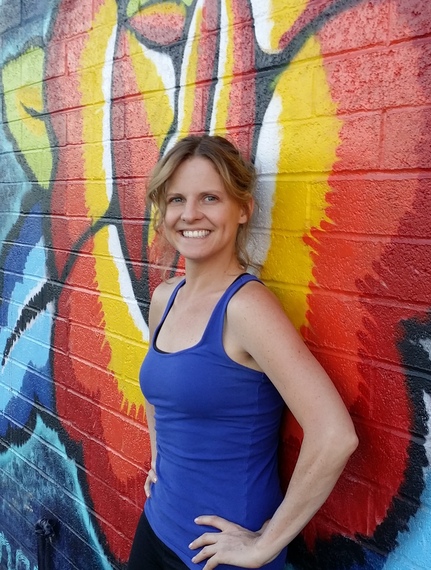 This is an interview with Paige Reeves, who launched YogaVida in October 2013 as a non-profit initiative to bring the mental and physical benefits of yoga to the Latino immigrant community in Phoenix, Arizona. She teaches a free weekly general class in Spanish at a partnering non-profit health care clinic (Phoenix Allies for Community Health), and is also sharing relaxation, mindfulness meditation, and moderate asana techniques with a Spanish-speaking HIV-positive support group. YogaVida is starting to grow; recently, several enthusiastic teachers have responded to calls for Spanish-speaking teachers.

When family reasons brought me back to the US after almost two decades in Spain and Peru, I noticed that while yoga is incredibly popular and available in Phoenix, and Phoenix is home to a huge Latino population, the two have barely met. I saw an opportunity to bridge that gap and, at the same time, to support immigrants -- a group whose particular obstacles have always concerned me, especially against the backdrop of Arizona's hard line on immigration. I saw a chance to meet people in a new city and to keep my Spanish-speaking, South American-living side alive.

What continues to motive me is interacting with the students, building relationships, being a part of their lives, and hearing their responses to the changes they have felt along the way. I like that they truly want to be there. We enrich one another.

Is there a standout moment from your work with YogaVida and the Latino community in Phoenix?

That moment would be the openness and willingness of the HIV-positive support group during our first class. I was a complete stranger to them, an outsider to their close-knit community, yet they sat patiently and attentively while I talked (a bit nervously at first -- I still get nervous speaking in front of groups!) about mind/body medicine, and stress reduction. Then they were brave enough to take off their shoes and lie down on the carpeted conference room floor, some with visible trepidation, close their eyes (most of them anyway), and follow the instructions of someone they didn't know at all, to do something they'd never seen before. I relaxed, they relaxed. The class started to be peppered with jokes and good-natured grunts. By the end of our two hours together, there was a palpable feeling of trust and mutual appreciation, of connection.

I had recently moved to Phoenix, so honestly, I didn't know much about this particular population. I'm getting to know the community with each interaction. But in any case I did feel that I wouldn't be able to truly know how the project would be until it actually came into being. I had a general idea of the "how" and the "what" I wanted to offer, but I needed to allow the actual experiences and the actual people to shape YogaVida.

In YogaVida classes, we don't follow what I think of as standard studio protocol or etiquette. For example, students might interrupt with a question in the middle of class; we might get off-topic if there is something interesting to talk about. We laugh quite a lot, and the whole thing is a lot less formal. Sometimes, one mom needs to bring her 2-year-old because she can't find childcare. We simply set the little girl up on a folded mat and have her play along, copying our movements. Yes, it distracts from the class in the strictest sense, but we make it work, and everyone gets to do their yoga.

Secondly, I focus less on refinements, not to water it down or because the students can't do them, but in order to make our classes fun, light-hearted, and accessible. If the pose a student is making is more or less as intended, and everything is safe, I know the pose is being effective.

To be perfectly honest, sometimes I struggle to keep up my motivation to do the project, to go out and build up a student base, find new spaces to hold classes, seek material donations. In other words, sometimes it is easy to fall back into my own comfortable little life. The "fix", though, is pretty easy: I simply keep doing it. Each time I do a class and see my students, my motivation and enthusiasm are renewed.

As with almost anything in life: suspend your expectations, opinions, and assumptions. Be mindful and open to who, and how, your students actually are. Be informed. Keep it fun and accessible. But more than anything, just go out and do it -- the rest will fall into place.

What about a future where there is less of a distinction between "yoga" and "service yoga?" Every single one of us already knows how good it feels to help out a friend, a family member, or a stranger. As yoga continues to infiltrate well-being efforts across the board (schools, offices, prisons, hospitals, neighborhoods of all types and incomes, etc.) and as we keep gaining awareness of how truly interconnected every living being on this planet is, I can envision more and more people becoming inspired to pay forward the emotional and physical changes yoga has sparked in their own lives.

So far, I haven't experienced a shift in my definition of yoga or of service. Perhaps that is because my definitions are pretty simple: I believe that yoga meets you where you are, and gives you what you need. I believe that service is a mutually-enriching exchange that can be big or small, subtle or groundbreaking. My practice has changed only in that I have been given one more opportunity to feel the healing power of coupling my own self-study with loving, giving interactions with others.