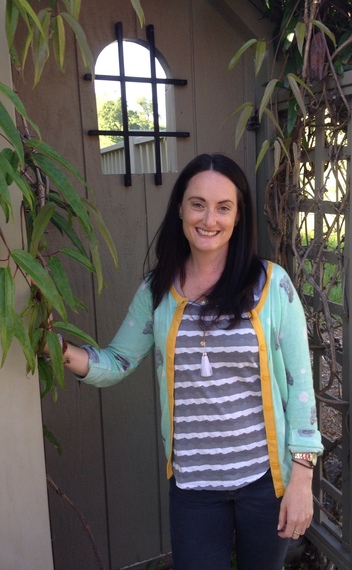 This is an interview with Sabrina Seronello, who was on active duty in the Air Force from March 2000-March 2006. She was a medic working in the emergency department of a Level 1 trauma center at Wilford Hall Medical Center, Lackland AFB. Sabrina deployed to Iraq in January 2005 to the Air Force Theater Hospital, a Level III (injured patients and emergency operations) trauma center. Upon returning from Iraq she was introduced to yoga.

Rob: How did you find yoga?

I had read about how it could help you relax and sleep better. Between what I saw and experienced taking care of the wounded in Iraq, and being a victim of sexual assault while in active duty, I had been having terrible anxiety and panic attacks. I was always a long-distance runner but I needed something more. So I checked out a few yoga classes and really enjoyed them.

Unfortunately, the yoga didn't last long and I started down a dark path of using alcohol and Xanax to quiet my mind. My active duty portion of my commitment to the Air Force was up in March 2006, and I decided it was time to get out.

My life slowly started to spin out of control. I had no idea at the time that I was dealing with severe PTSD, depression, and anxiety. I returned back home to California in December 2007. I made it almost eight months before I did something I thought I would never, ever do. In July 2008 I attempted suicide after a night of drinking and using. All I remember is I wanted to go to sleep forever and stop all of the pain and chaos that was in my mind. I took a handful of Xanax, and washed it down with some tequila. I woke up a couple of days later, strapped to a hospital bed and staring at the ceiling with a breathing tube down my throat in an ICU room. I had gone into respiratory arrest and stopped breathing, witnessed by my sister.

Upon leaving the hospital I was transported to a lockdown psych unit at the VA hospital in Palo Alto, California. Then I went to a 28-day alcohol and drug treatment program and there I was introduced to tai chi. The tai chi made me think of those yoga classes I had taken back in 2005, and just over a year later I walked into a yoga class, and I've never looked back.

After finishing college in 2011 and getting my BA degree in Human Development I found myself longing for more. I had a tough time adjusting to being around so many people in college, and found myself getting more involved in yoga to cope. In 2012 I decided to take a 200-hour hatha-based teacher training program at The Yoga Company in San Ramon, CA. I felt drawn to becoming an instructor so that I could somehow carry on the gift of yoga that had been given to me. And in January 2013 I started going into San Quentin to assist in the Prison Yoga Project program with James Fox.

What originally motivated you to bring yoga to veterans in San Quentin State prison?

I clearly saw how yoga had changed my life and helped me deal with my PTSD, anxiety, depression, alcoholism, and substance abuse. I read a few articles on James' work and the Prison Yoga Project; also, I have a cousin who had been in prison for almost 16 years at that time. I thought of him and some veterans I knew who had been incarcerated and figured I would email James Fox to see if I could get involved with him and his program. Right around the time I emailed him he had just started the first veterans-specific yoga class at San Quentin. Words cannot describe how grateful I am that he came into my life and took a chance on me. He is by far the most valuable mentor in my life today.

I know these classes are about mindfulness. What is the importance of mindfulness for developing impulse control? How does this help life inside a prison?

Being mindful and aware of the breath has the ability to bring you back to the present moment. It helps you respond differently when challenged with tough situations. You learn how to handle your anger and frustration without acting out, or causing harm to yourself or other people around you. In prison you are constantly on guard, watching your back and waiting for the next bad thing to happen. It's a dangerous, unpredictable environment and just being present and focusing on the mind, body, and breath connection will change you and your reaction to life.

Yoga brings up all kinds of feelings and emotions, and with a regular yoga practice over time you learn how to let them come and let them go. Feel it, experience it, and breathe through it. I love how, at the end of class, some of the guys come up and tell you how relaxed they are or how they weren't in a good spot before class but now feel a million times better. One guy was telling me how he was having a hard time with a new corrections officer and instead of engaging with the officer he just slowed down and thought for a second that there wasn't anything he could do to change this guy's mind. There was no use in fighting back with the officer, and he began to focus on his breathing, and relaxing.

I'm interested in knowing why we should be spending money on providing yoga to incarcerated veterans?

What we are doing right now isn't working. According to a 2011 report, "just over 65 percent of those released from California's prison system return within three years." And veterans are 10 percent of the prison population. How do you expect people to get better and change and become productive members of society if they don't have the tools to change? By offering yoga we are giving them the tools to change. We are teaching them that there are different ways to handle the stresses of daily life and the haunting past.

Has the application and effectiveness of your program been evaluated? Is there an evidence base in particular?

Yes, a June 2012 study conducted by the correctional assessment research agency National Council on Crime and Delinquency (NCCD) reported on the effectiveness of the Prison Yoga Project's classes at San Quentin and found that participants had experienced a decrease in stress and anxiety, calmer temperament, increased emotional control and anger management, improved rational decision making, and a reduction of chronic physical pain. And there's a lot of anecdotal evidence, as well as written testimonials from the men, that further support those findings.

What is the greatest challenge in mindfulness classes becoming a regular feature in prisons?

That challenge is breaking down the misperception that prison administrations may have about offering yoga to prisoners. Another is how to find funding to bring yoga into prisons, as well as locating space and well-trained instructors. I volunteer my time, which I am more than happy to do. I am in a position right now that allows that, but not everyone can do that.

What advice would you give to anyone who would like to volunteer teaching a weekly class at a prison?

Be yourself, be honest, set boundaries, be committed, be consistent, be aware of your surroundings, and have fun. Regardless of what's going on in your life you need to keep showing up. The guys in there are used to people bailing on them and not showing up. You can't just be there when it's convenient for you.

You also have to remember that you are in a prison. You need to be aware of what's going on around you. I have never felt unsafe while at San Quentin. However, you need to remember that you are in an unpredictable environment, and something could happen at any minute. Also remember why you are there. It's not for a hardcore asana practice. It's to get back to the basics and provide a safe healing environment to help people build a connection to their mind, body, and breath. Offer them the opportunity to close their eyes if they feel comfortable. That's something we take for granted while taking a class in a studio. Imagine not feeling safe and being able to close your eyes and drop into yourself. This is the first opportunity in a very long time these guys have gotten to do that.

As a veteran, I was fortunate to have an instant connection with the men in the class. At the end of the day these are just regular guys who appreciate anyone willing to come in and help them. At first they couldn't believe I was coming back week after week. I go to San Quentin once a week and there are days that I wake up and think I don't want to drive 45 minutes to an hour across the Bay in commuter traffic. Then I think of the guys. They're looking forward to class and I told them last week that I would be back.

In reality I have been helped more than I am helping them. I can't begin to explain the amount of healing that I have experienced since I started going inside San Quentin. I always leave there thinking, wow, that's what it's all about--offering yoga to people who truly need it. It could be any one of your family members locked behind the bars, or even you. It's inches and seconds that keep people in and out of institutions like San Quentin.

What should prison administrators know about the Prison Yoga Project's work with veterans?

As a medic with an extensive background working with trauma victims, I can confidently say that the Prison Yoga Project's work with veterans offers leading-edge alternative treatment for trauma-related issues that can serve as a great complement to traditional mental health therapies. Its work achieves a very positive influence on people who are struggling with previous emotional difficulties, as well as the challenges of prison life. Finally, the Project's work is a way to give back to people who, although they may have committed a crime for which they are incarcerated, did honorable service for their country in the military.