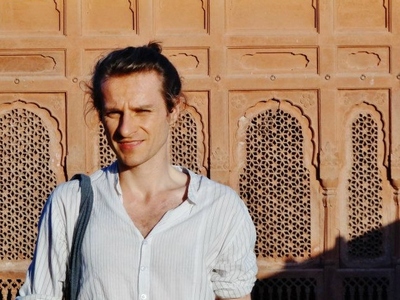 This is an interview with Szymon Jarosławski, PhD, certified yoga and meditation teacher and Thai massage therapist based in Bangalore, India. According to the World Health Organization, an estimated 39 million people are blind; over 15 million live in India. Szymon teaches free yoga classes to male students of a vocational training centre for the visually impaired. Blind Yoga Seva is his volunteering commitment; a short video of this work can be viewed on his blog Find Your Yoga.

Rob: What originally motivated you to do yoga with people with impaired vision and what continues to motivate you? How, if at all, has that motivation changed over time?

Szymon: Volunteering has been my way of sharing various passions for a decade, amidst changing life circumstances and careers. When I started teaching yoga in 2011, however, the enthusiasm and profession aligned for the first time. Consequently, I soon began to seek opportunities to both gain more experience as a yoga teacher and reach people who couldn't afford to practice yoga in a commercial setting.

But my motivation changes with every class, often during a class. For instance, I may come to the class from a sense of responsibility, but finish the class motivated by a breakthrough of one of my students, or simply by the continued gratitude they show after each class. I believe being receptive to such changes is a part of mindful living.

Is there a standout moment from your work with people with impaired vision?

There have been many such moments! The most remarkable is the unique atmosphere I can sense at the end of each class, when the students are lying down still in Savasana (corpse pose). We practice outdoors, at dusk, when the sky seems incredibly open and approachable in the tropical climate of Bangalore. The students appear to regard this moment with genuine respect and solemnity which I have rarely had chance to observe in my life.

What did you know about the population you are working with before you began teaching? What were some of the assumptions you had about this population and how have those assumptions changed?

I didn't know much about the lives of people with impaired vision. From my internet research on yoga for this population it appeared that they usually have balance problems and that the major goal for a yoga practice should be improving their sense of balance. Surprisingly, it did not turn out to be the case of my students, whose balance was better than that of most students with full vision. In fact, regardless of their vision, each practitioner has a different personality and posture and their needs and goals will differ accordingly.

My favorite rule when working with unknown clients is "First, do no harm." I find that being gentle and maintaining continuous alertness to the progress of practitioners in a given class is more important than doing an extensive literature review and a class plan beforehand. Of course, it is always advisable to be aware of counter-indications for a given population, but one should be open to challenge their assumptions on what are the strengths and weaknesses of new students, and continuously adjust the practices to match them.

What are two distinct ways that your teaching style differs from the way you might teach in a studio and what are the reasons for these differences?

Each student is different and I would not generalize to the entire population of people with impaired vision. I describe in more detail my approach to practicing yoga with them in this article, but here I would like to mention the communication barrier.

Whereas my regular students are usually well educated and speak fluent English, these students often come from underprivileged families, received minimal education in their native Indian languages, and speak only basic English. Consequently, my verbal instruction is brief, the cues for postures, breathing exercises and meditation are simplified and I typically have to give hands-on adjustment to each student.

These have been mostly financial. The training centre where we practice has limited resources, so initially we practiced outdoors on the ground. People with impaired vision benefit from props such as the wall or mat, which help them to place their body in space. This improves alignment in the postures, especially in the first weeks of practice. In order to provide each student with his own mat, I organized a small fundraising campaign in local yoga studios.

Another [remaining] challenge is the cost of commuting to the centre.

This may be your first experience teaching to people with impaired vision, but probably also the first yoga experience for them. So develop with them a partnership, take their feedback, keep your mind open, innovate, and challenge your assumptions. Remember to customize the practice to match the needs of each student rather than an entire 'population', depending on their vision, personality and posture.

What are some of your ideas about or hopes for the future of "service yoga" in India and worldwide in the next decade?

In my school, we were expected to document 10 hours of yoga seva (volunteering) as a part of our 250 hours program. I think it is an excellent practice and I hope it will become a standard for all courses in the US and worldwide.

During a decade of volunteering I have had an opportunity to understand that it is not about 'doing a service'. I like to feel that there is no giver and receiver, but rather a partnership. My students with impaired vision benefit the most from relaxation/meditation and breathing exercises, and I think that posture (asana) practice is merely an introduction to these two. However, yoga is an incredibly personal practice and each student should be guided to discover on their own what serves them best.

Who do you admire?

India is a home to extreme poverty and socio-economic inequalities. I admire all social activists working towards greater solidarity and equality I have had the honour to meet here. Indians have a high regard for their cinema stars, whom they often call 'heroes' and 'heroines'. I wish the social activists that the society will grow to appreciate their work at least to the same extent, and that they will become acclaimed 'heroes' and 'heroines' of India in the coming years.