Innovation is a drastic process of change.

Preferably, it occurs in a very short period of time, yielding a dramatic turnaround.
And what could be more dramatic than a former entertainment wrestling champion advancing his very own system of yoga?

"Originally, when I was introduced to yoga, I kept resisting," said Diamond Dallas Page, 58. "I kept saying that I wouldn't be caught dead doing yoga. Years ago, there was absolutely no way. But that was my ignorance. I was very frustrated with it. Think about it, people are twisting themselves up like pretzels, right?"

But several years ago his now ex- wife, Kimberly, bullied him into not just participating in yoga, but actually learning more about his body from it , and allowing it to heal his bodily agony, which including a badly mangled back incurred from professional wrestling. He dealt with yoga in its smallest, least threatening form, and within three weeks, he was hooked, and those aches no longer felt as achy.

"I have a real passion now talking about DDP YOGA," said Page. 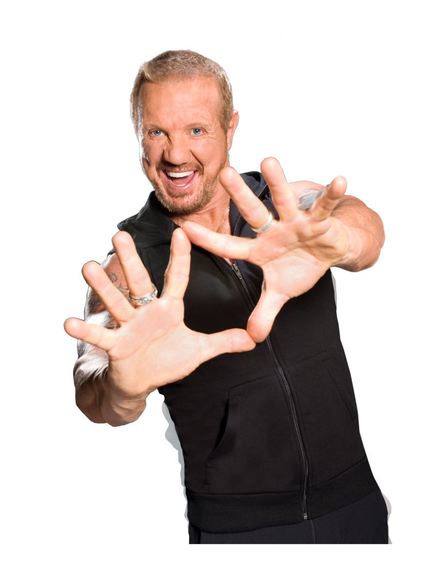 The totality of the canvas and the reality of middle age caught up with his body. After that came his reluctant destiny with yoga. Despite the fact that three separate back specialists said that he was finished, three months later he was competing again. One year later, he was a WWE World Champion, and at age 49, he hung up his wrestling trunks.

But there was something in the rotations and twists and nourishing mentality of yoga that got Page's entrepreneurial juices flowing.

"I started to mix the yoga positions and the rehab techniques," said Page. "Then I added old-school calisthenics, the push-ups, squats and crunches. DDP YOGA became a kick-ass cardiovascular workout while strengthening your core with minimal joint impact. I put my own style on it, and it sits by itself."

Page learned quickly that breaking into the highly-competitive health fitness market required the mettle of a burglar and perseverance of an inventor. The odds were heavily stacked against him. But he found the kind of traction he needed. Page even ended up on the high-rated, capitalist-consumerist megahit Shark Tank.

"I loved being on there" said Page. "I loved being able to show people what DDP YOGA is all about. It took five interviews to get there. They are real sticklers."

Shark Tank was a win-win state of affairs. Though Page didn't receive the requested funding, he watched the sales of DDP YOGA sail over the moon.

"Here is how strong that show is," said Page. "in six days we did one million dollars in sales. That's insane. From the rebroadcast alone, we made $200,000 in sales."

Born in 1956, Page Joseph Falkinburg wasn't always busy concentrating on his own wellbeing. The Point Pleasant, New Jersey native operated nightclubs in his early 20's and was a self-described "party maniac."

"I did all of the shot specials," said Page, who legally changed his name to Dallas Page in 2003. "Yeah, the seventy-five cent Kamikazes. Man, I partied even at 35 when I got into wrestling, but way less. When I blew my back out at age 42, I said, 'Okay, I've got to be more concerned about food and health."

Controlling his own destiny is practically written into Page's job description.

"From wrestling, I learned what I'm not going to do again," said Page. "I let the WWE control my destiny and it didn't work out so well. Since then I am not afraid to get up and walk away from the table. I'm not going to have anyone tell me what I can do promoting my product. We live it."

Frustrated souls tend to give up, accepting life's consolation prizes rather than trailing their real ambitions. Successful souls question themselves and somehow find the inspiring answers to validate their pursuits.

"Sure, there were times when I was thinking, "Dammit, did I just waste $500,000 of my nest egg on something that isn't catching on!' But then I'd get a thank you email, or an email about someone's pain management, or an email from someone telling me that every morning they would be waking up in pain, but no longer. I knew it was real - the thank you emails."

Products sink or swim on the merits of their individuality, as well as the individuality of their makers. One of the greatest overachievers in pro wrestling is now a fitness guru. What's not to love about that?

"That diamond cutter sign became my moniker," said Page. "At first there were 5, then 50, then 500, then 1,000, and then 20,000 thousand people doing it. I think that's because people saw me working my ass off and they admired that attitude. Same thing with DDP YOGA, the attitude is that the system will improve your physiology and flexibility and core strength. It can literally help heal you."

Resurrection of Jake "The Snake" Roberts 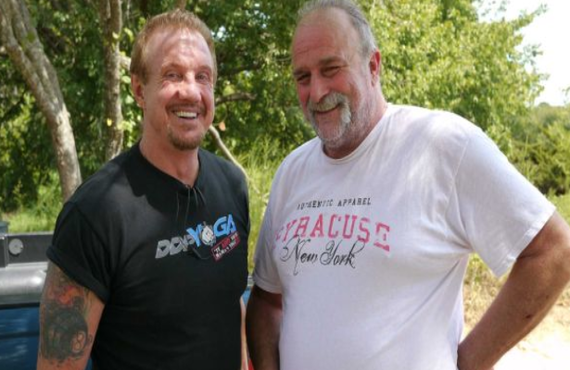 One of entertainment wrestling's most memorable fixtures is Jake "The Snake" Roberts (pictured above on the right, with Diamond Dallas Page), a harrowing, hardcore throwback who Page sees as his mentor. To say that Roberts has grappled with tough situations is practically an insult. Rebounding from the throes of drug and alcohol addiction, Roberts credits much of his renewal to DDP YOGA.

"Dallas is one of these guys who doesn't take no for an answer," said Roberts, 59. "I was drinking, drugging, I was over 300 pounds, and I was heading to die if someone didn't stop me. I couldn't get out of the chair or on to the floor. If I'd get halfway down to the floor, I'd flop. Before DDP YOGA, my idea of rehab was doing cocaine and drinking."

Roberts said that he lived with so much self-hatred, daily loathing what he'd become: a drug addict and alcoholic. Dallas Page helped Roberts clean up by essentially seizing control of his life. DDP YOGA was one component of the total turnaround.

"Dallas has a passion for helping people," said Roberts. "Dallas tricked me into doing the program. He got me off gluten and dairy and got the parts moving again. He moved me to Atlanta, got me eating the right kind of food. The swelling in my hands was gone. My hands are all crooked and bent, and there was so much inflammation."

Fate was beckoning Roberts, and Page wouldn't let him turn away. A strange thing happened: Roberts started to care once more about living.

"I hadn't had any passion for a long time," said Roberts. "I was proud of what I was doing in the ring. But those days were gone. Being into this (DDP YOGA) gave me hope again. It got me dreaming about the good things in my life. No bullshit. I'll never be able to thank Dallas enough for saving my life." 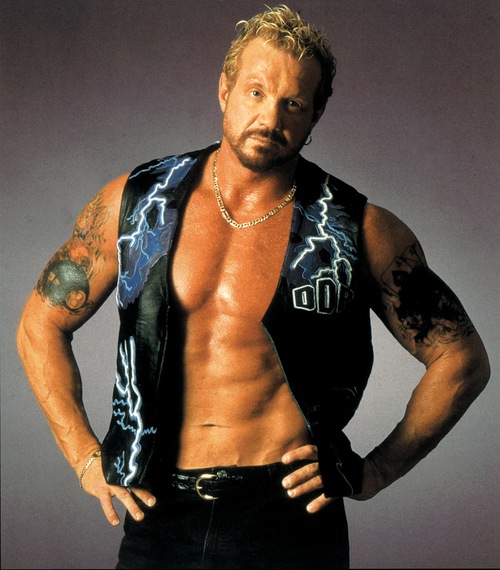 Innovation is rapid and big and flashy; it reaches for the largest result in the smallest amount of time. But one of DDP YOGA's great strengths is that it allows people take incremental steps to achieve large goals. DDP YOGA is about transforming your life, not rushing through the experience. It's not a race, it's a process.

In fact, Page said that people usually fail in fitness and stumble short of objectives because of their lack of a support system. Cheering you on is part of the package.

"I called 15 people last night who bought the program," said Page. "I call people who get the program and I do it every single day."

Perhaps the most important lesson you can learn from in business is when to break the rules. You have to test assumptions and you have to just take that leap of faith.

"I live by the business model that there is a better than, a less than, or a different than," said Page. "Those are the three categories. I chose to be different than. The one that's different than will stand out with the proper work ethic. Bottom line is don't ever be afraid to fail."