Last Saturday on the adjacent mat was a pleasant Norwegian woman. After class she asked me if I liked the class and I responded affirmatively. I asked her if she liked the class and she replied, "I like this teacher because she always adds some spiritual stuff at the end." I laughed. In my mind I thought, that's like someone saying, "I've always eaten salads at McDonald's -- I didn't even know they served hamburgers!" Recently I've partaken in quite a few exercise classes sprinkled with "spiritual stuff" and I wondered how this became known as yoga in America?

To reduce thousands of years of ornate yet uncertain history to a fortune cookie is unadvisable, but let's sketch a brief outline of the evolution of yoga: during the Vedic period yoga consisted of a group of men screaming primordial sounds (generating tapas) around a fire trying to unite with the divine. During the Upanishadic period that heat (tapas) was internalized and yoga became sitting and focusing on the breath, again in an attempt to transcend the mundane and "realize Brahman." For the next thousand years or so -- up through the Yoga Upanishads and Patajali's Yoga Sutras -- yoga and meditation were essentially synonymous; then in the 15th century, the Hatha Yoga Pradipika introduced a few asanas.

Yoga was introduced to America in 1893 by Swami Vivekananda who spoke at the Parliament of Religions. In the 1920s Paramahansa Yogananda began the Self-Realization Fellowship in Boston and in the 1930s Sri Aurobindo founded Integral Yoga. About 80 years ago Krishnamacharya standardized asana sequences and his four most famous disciples became the founders of yoga schools in America: Pattabhi Jois, B.K.S. Iyengar, Indra Devi, and Krishnamcharya's son, Desikachar. In 1946 Paramahansa Yogananda published Autobiography of a Yogi; in the1950s Swami Vishnudevananda created a sequence of 12 postures that became known as Sivananda Yoga; in 1953 Indra Devi published the first best-selling book on yoga Forever Young, Forever Healthy; and in the mid-70s David Williams studied with Pattabhi Jois and brought Ashtanga yoga to America while B.K.S. Iyengar abandoned Krishnamacharya's vinyasa style and added precision as well as therapeutic descriptions to the asanas to found Iyengar yoga.

Up until this point, all of the abovementioned teachers had gurus and the physical part of yoga was still directed towards preparing the body for seated meditation. In recent literature, academics have argued that Pattabhi Jois and Iyenger were influenced by witnessing the exercise regimes of the British army whose "burpees" became our sun salutations. Nevertheless, the point is that in the history of yoga, only very recently was there a concentration placed on the physical practice.

In the 1970s and 1980s, Americans became obsessed with looking good. There was a mad rush for diet pills and Richard Simmons and Jane Fonda videos. Around this time yoga became unhinged from its Indian lineage and Americans started branding their own sequences and opening studios. Power, Jivamukti, and Bikram were among the first offspring; then came Vinyasa Flow, Anusara, Rodney Yee, Rod Stryker, Baron Baptiste, Shiva Rea, et al. All of the founders of these American brands had the highest intentions. Really. All of them had gone to India, studied with renowned gurus, and had practiced and taught for many years before developing their own styles and brands.

But then in the 1990s -- mostly due to huge increases in rents that correlated with the housing bubble -- many studios had a hard time paying their bills. Many closed their doors. They all learned that it would be difficult to run successful businesses and draw enough students to cover their expenses just by teaching 60-90 minute classes.

So in just one generation, because of high rents and a handful of teachers becoming extraordinarily celebrated in the media, 200-hour yoga teacher trainings for $3,000 became all the rage. 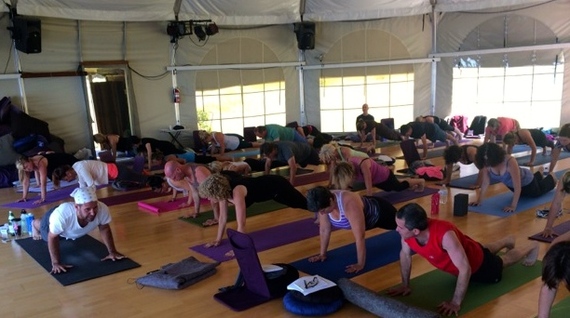 Besides being a yoga teacher, I am a psychotherapist. I have just completed a seven-year process that included school for $35,000, 3,000 hours of internship at minimum wage, and then a barrage of staggeringly difficult licensure exams. All to enter a profession where the medium income is $52,000. I mention this other healing profession only to presage where the business of yoga is heading. For Freud originally treated hysteria by giving vaginal massages; Jung had sexual relations with many of his female clients. The government stepped in to regulate "talk therapy" and the California Board of Behavioral Sciences now insures consumers that psychotherapists will do no harm.

Mark my words: This is the same path that yoga is on.

Here's how it will happen: An under-experienced yoga teacher will put the wrong person in shoulder stand, snap his neck and paralyze him. He or someone close to him will be an attorney and will sue the teacher and studio for $20 million and win. The teacher's liability insurance with a $1,000,000 ceiling will leave the teacher $19 million dollars in debt. The studio will close and the state government will step in to regulate all aspects of teacher training the same way they regulate all aspects of becoming a licensed psychotherapist.

To summarize, the problem is that high rents have caused yoga studios to pump out a plethora of under-experienced teachers. Many of these are the same teachers -- who are all in competition for a limited number of jobs and students -- are the ones "wrecking the bodies" of students -- according to the New York Times -- because they don't understand that yoga is primarily a spiritual tool, not a physical exercise practice to make you look better. Unfortunately, aside from a little "spiritual stuff at the end," those exercise regimes have nothing to do with yoga, uniting with the divine.

Of course it is wonderful that anyone comes for exercise and leaves with a little spiritual stuff. It's equally awesome that there's such a smorgasbord of classes available to people of all shapes and sizes. The problem is that 90 percent of what's being called yoga in America has nothing to do with the original purpose of yoga. What's the solution? I don't know. Some people wish to "Take Back Yoga" to the spiritual practice it was, but I fear that it is way too late to separate it from the physical asana practice. I do know that psychotherapists have a union that supports us. I know that many yoga teachers earn $25 and $35 for a class where students are paying $22 each and the teachers don't have health insurance, are required to have liability insurance and be certified by Yoga Alliance, and do not feel supported by the studios or Yoga Alliance.

Lest we forget, as I said in my previous blog: We are the good guys.

We were all drawn to the healing arts for a reason and we all want to make the world a better place. But the high rents that flooded the market with a surplus of teachers vying for students has caused an untenable situation. With the advent of yoga therapy, government will surely get involved. The question is, "At what point will yoga teachers organize and decide what is yoga and what is not, or will we just wait and let the government define it for us?"