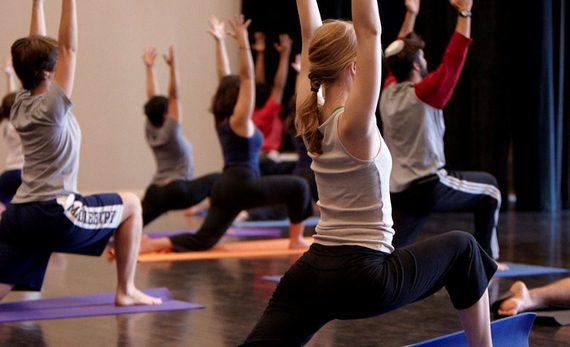 Yoga instructor Faith Harcourt wished peace and wellness to everyone during this Sunday's Vinyasa Power-Stretch class at Lively Lotus Yoga, with the notable exception of Amy.

Attendees noted Faith's gentle cadence wavered slightly when the 23-year-old graduate student arrived six minutes late to the class. Her annoyance became further apparent as Amy had trouble making a simple downward dog and said aloud, "I guess my calves are just too tight or something."

Devoted practitioner Jessie Smythe observed Faith flinch when Amy sighed too loudly during the meditation, and again later when she didn't sigh loudly enough during the Breath of Fire.

"I saw Faith kind of rolling her eyes at Amy's pajama pants," said Jessie. "And I can't really blame her; they're all old and ratty and the tag was sticking out all class. Plus they're totally from Target."

Faith concluded the class with an excerpt from a poem about the power of loving one's enemies, pausing only to glare at Amy as she sneezed.