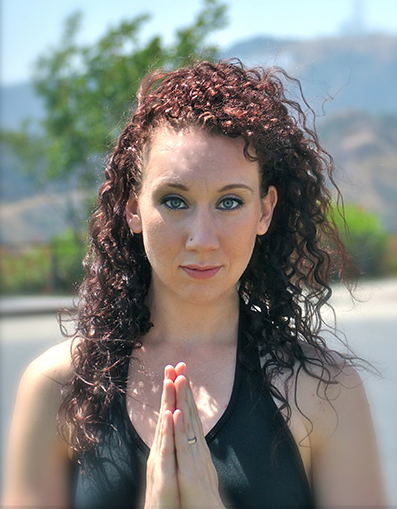 I first met Olivia Kvitne while she was offering free yoga classes for veterans, as well as continuing education workshops on yoga and the neurological system at the Los Angeles Fire Department Training Center and the Los Angeles Police Department. She is now the Give Back Yoga Training Director for the Trauma-Sensitive Yoga and Resiliency Training to Benefit First Responders hosted by the Sedona Yoga Festival in February 2015. Olivia writes for and is Assistant Editor of LA Yoga Magazine. I caught her for this interview just before she left for a teacher training trip to India. Check out key articles she has written including "Operation: Yoga" for LA Yoga Magazine, and "Yoga for Veterans: An Ancient Practice with Life-Saving Potential" for The Shift Network.

Rob: What originally motivated you to work with first responders, and what continues to motivate you?

I started by teaching yoga to veterans and military personnel. It was my mother who mentioned offering the same opportunities to first responders. It became obvious to me how beneficial the science-based practices of trauma-sensitive yoga can be for this population. I have had a few incidents in my life in which firefighters and police officers have helped me; this is my way of saying thank you.

I am continuously motivated when I see my work positively affecting members of the fire and police departments, and seeing them become excited about it. When they "get it" and continue to roll out their mats week to week, it adds to my passion to teach them.

How, if at all, has that motivation changed over time?

The classes started off experimental. I had to see what worked for them, and what didn't. The motivation started with the excitement of potential, and soon became about making their lives off the job more enjoyable. My classes also changed the way first responders feel on the job: more focused, higher resiliency, stronger in their physical bodies, and tougher mentally. It's a whole new ball game now.

Is there a standout moment from your work at the LAPD/FD?

After teaching a yoga session for the high-ranking command staff of the LAPD, I was told by the psychologist I work with (from their Behavioral Science Services) that one of my class attendees, a Deputy Chief, was getting pretty heated during a meeting later that day. Before things got too out of control, he stopped and said, "I need to take a yoga moment." The fact that what I am offering is having a positive effect on his work environment, and that a ripple effect can happen from there, is a huge success for yoga in groups of first responders.

I used the training I had for teaching yoga to veterans and military, and adjusted it to fit this population. Their needs are different, and I had to learn that through experience. I started off knowing and assuming what most of us do, especially about police officers: no nonsense, tough guys and gals, huge egos, and likely to laugh at the subject of yoga. I also assumed they would deny the internal struggles that come with the job, trying to keep up their tough appearance.

After I started working directly with first responders and the department psychologists, I realized they were aware of the need for this kind of work, open to it, and very respectful of what I had to offer. A few just weren't ready for it, and that's fine. No matter what one's line of work is, everyone has a different journey with yoga.

There are definitely classic stereotypes that I came across, but after teaching them I saw what was underneath: human beings doing the best they can and wanting what everyone else wants: happiness. I have more respect for first responders than ever after having seen what's behind the badge.

What are two distinct ways that your teaching style differs from the way you might teach veterans, and what are the reasons for these differences?

The foundation for all yoga that is trauma-sensitive is basically the same. I stay true to these principles as to avoid any triggering of the nervous system.

When I teach veterans, I focus more on healing, forgiveness, and acclimating back to civilian life. These students may be dealing with more acute stress, or incidents that then lead to Post Traumatic Stress. I keep the practices directed on deep relaxation, breath work, and specific poses to help eradicate trauma that is stored in the body. 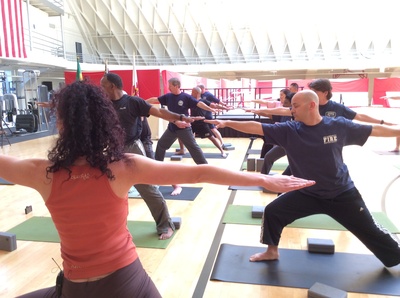 First responders are still on the job and most likely will be for 30 years. They are dealing with cumulative stress that leads to Secondary Traumatic Stress or Compassion Fatigue. Compassion Fatigue is commonly found in care givers, health care workers, and first responders. I focus not only on releasing on-the-job experiences from the body and bringing the nervous system back to homeostasis, but also how to strengthen the mind and body for the next shift. These classes aren't easy. I take them to their edge and show them techniques to bring themselves back to neutral.

Their dealing with humanity at its worst (including death and destruction) can lead to negative cognition and some distrust in people, even those they love. We re-train the mind to be open to the world around them.

The biggest challenge is convincing someone to get on the mat for the first time. We all fear what we don't know. It's also difficult for this population to look as if they can't do something. They are afraid of looking silly and hearing about it from their buddies.

I never push anyone to do yoga. I let them know that the class is there for them when they are ready. Once they see their buddies trying it and everyone looking a little out of their element together, they are usually more apt to try it. Once they get on the mat for the first time they quickly get over that initial hesitation.

What advice would you give to anyone who is going to teach yoga in his or her local police and/or fire departments?

Attend a Trauma-Sensitive Yoga training. It is important to be knowledgeable in this type of work. Learn about the culture of first responders and be respectful when walking into their world. That being said, once you are in the position of "teacher," sit comfortably in that place. Don't be afraid to take charge and teach them what you know. They will respect you for it.

What are some of your ideas about or hopes for the future of "Yoga for First Responders" in America in the next decade?

I see this type of yoga being a staple in police and fire academies. I then see recruits expecting to see it on the schedule. Once they are on the job, it would be wonderful to continue to have classes offered to them on a weekly basis, or as seminars and continuing education opportunities. This could also happen at local gyms or studios. I'd like to see yoga as an important piece of the puzzle when it comes to training and caring for our 'domestic soldiers.'

Are you a yoga instructor giving back to underserved populations? Email Executive Director Rob Schware if you're interested in being interviewed for this series.