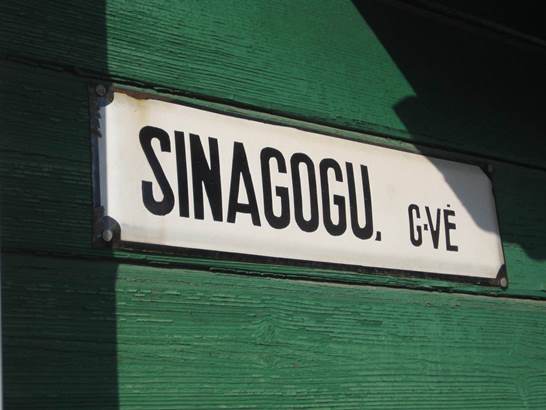 On Yom HaShoah, the anniversary of the Warsaw ghetto uprising, we remember the Jews killed in the Holocaust. On April 28, I will remember the 6 million. Also on my mind will be a little town in the northeast corner of Lithuania, and a white-haired man searching for a way to pay his respects to the dead.

Rokiskis (Rakishok in Yiddish) is a town of 16,000, famous for its cheese, where my Jewish family tree extends back many generations.

My grandfather Yankl ran from this town in 1911, escaping the Tsarist draft. Many of my forebears stayed behind. Some were still in Lithuania in the summer of 1941 when the German army invaded and a place of relative harmony between Jews and non-Jews became a place of uncommon brutality. Lithuania's Jews were massacred with a swiftness and thoroughness unusual for even that bloody time. While in most cases German officers gave the orders, it was usually Lithuanians who pulled the triggers.

The town of Rokiskis was no exception. In August of 1941, the Jews of the Rokiskis region -- men, women, and children -- were rounded up and marched into the forest to be shot. Lithuanian men wearing white armbands, collaborators with the German forces, lined both sides of the road and participated in the massacre. In my childhood, my ancestral town seemed utterly inaccessible. But there came a day when, to my amazement, I found myself standing in the market square. Under the vast Baltic sky, the town seemed hushed, suspended like a held breath. The Church of St. Matthew thrust its spire high into the heavens. A grand manor house gleamed in the distance. Huddled on the side streets, the wooden houses wore thick coats of red, green and ochre paint.

Today, I was told, there are no Jews in Rokiskis. Yet here and there, traces of the nearly vanished Jewish culture remain.

A small sign nailed to the side of a corner house read "Sinagogu gatve" -- Synagogue Street. It was here that my great-grandfather Dovid-Mikhl used to pore over the Talmud.

A few miles down the road, deep in the woods, I stood before a grassy rectangle and a monument. In this green glade, thousands of Jews, including some of my own distant cousins, were shot. Now the wind stirred the leaves of the birch trees. I listened, and in my head I answered. "Ikh bin do," I whispered in Yiddish. I am here.

During nearly half a century of postwar Soviet rule, for the most part Lithuania's Jewish history -- including important truths about the Holocaust -- officially slipped out of view. Yet in the words of Lithuanian tolerance leader Linas Vildziunas, "the massacre of the Jews, and the very life of the Jews in Lithuania... doesn't disappear. It becomes an unhealing wound."

Vildziunas is one of the brave people in Lithuania, Jews and non-Jews, who have worked to engage with their country's Jewish heritage and exhume the truths of the past.

"Confronting the reality of the Holocaust," Vildziunas wrote, "is a most serious test of the moral values and civic maturity of modern-day Lithuanian society."

"The annihilation of Lithuania's Jews," he wrote, "affected every member of this society."

Among those deeply affected was the white-haired gentleman I met in the course of my visit, a non-Jew who grew up in Rokiskis.

In the summer of 1941, he was 10 years old, at play in the forest, when he saw two soldiers drag a young Jewish woman into a clearing and shoot her.

"I am the only person who knows where this woman's remains are lying," he told me. "I want her bones to be properly buried. Can you help me?"

For 72 years, this man had been carrying this memory. Now he wanted to find a way to honor his Jewish neighbor.

With the help of old maps and precision tools, town officials and museum curators accompanied the old man to the spot where he thought the shooting had taken place. The woods had been cut down, and everything looked different. But together they began to search, and they kept on searching.

They have not yet found the bones, and perhaps they never will. But by joining together to look, they are doing something very important.

I met other Lithuanians like this man, people who started to cry when they talked about the Holocaust. That is an emblem of the fact that, like other places, Lithuania has not finished coming to terms with its past, and in fact that process will never be finished.

The old man's search, joined by others in my ancestral town, is a microcosm of what needs to happen, and keep happening, throughout Lithuania and all the regions of Europe scarred by genocide.

This year, and every year, we need Yom HaShoah.