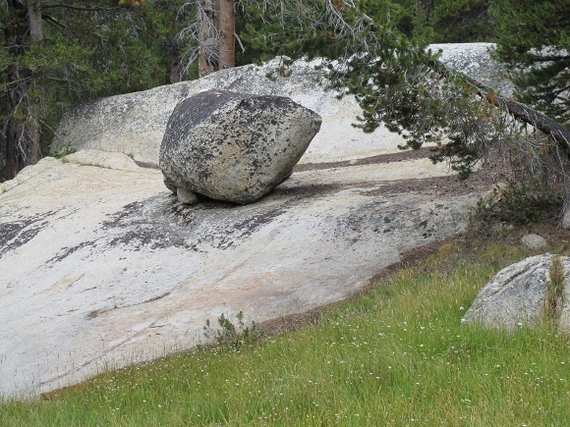 In Yosemite's high country: Is that grapefruit-sized rock all that's keeping the boulder from rolling down the hillside? Photos by Barbara Newhall.

Yosemite National Park is one of my favorite spots on earth. Why? Because it rocks.

Yosemite has El Capitan, just for starters. That massive cliff overlooking the Yosemite Valley is the biggest single chunk of granite in the park -- and in the world, for that matter. Just as spectacular as El Capitan's bigness, however, is the abundance of the smaller stuff at Yosemite -- the boulders, the stones, the pebbles and even the bits of sand that litter the park's 12,000 square miles.

There is something about those Yosemite rocks that speaks to me. It's their sturdiness, I think. They're willingness to stay in one place. Their wordlessness. 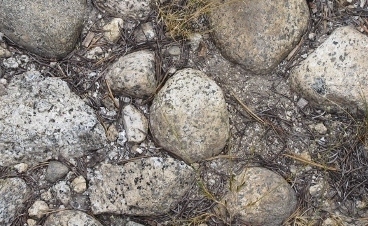 Underfoot on the trail, more rocks. Photo by Barbara Newhall

underground -- and many more eons for that rock to be thrust upward, to be shaped and polished by the action of rivers and glaciers.

If you really must have more of the geologic history behind all the earthy beauty at Yosemite, you could go on over to the Yosemite website, where you'll find some gorgeous words to go along with those exquisite rocks. Try letting the words granodiorite, tonalit, biotite, gabbro, latite tuff and hornblende roll off your tongue.

But first, sit a while and listen to these rocks. They are weighty. They have been here a while. They're trying to tell you something. 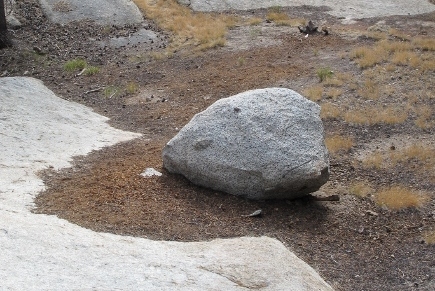 An invitation to sit. And sit some more. Photo by Barbara Newhall

If you liked this post, you might enjoy "Beauty Is in the Eye of the Beholder -- But What If There's No Beholder?" More photo ops at "China's One-Child Families -- They're for Real, for Now."

Barbara Falconer Newhall is the author of the prize-winning "Wrestling with God: Stories of Doubt and Faith" -- a skeptic's pilgrimage through the religions of the world.

More:
mindfulness meditationwildernessrocksGPS For The SoulNature
Newsletter Sign Up
An essential daily guide to achieving the good life
Subscribe to our lifestyle email.
Successfully Subscribed!
Realness delivered to your inbox