Saturday night, on the eve of Mexico's presidential election, tens of thousands of protesters marched with candles through Mexico City, according to Elizabeth Guzman, a member of the youth movement known as YoSoy132. They began their march at Tlatelolco Plaza, where authorities had opened fire on a protest by unarmed students back in 1968 -- an iconic moment in the country's history, when a youth movement strove to change Mexican politics.

The three-month campaign for Mexico's presidency officially ended June 27. But YoSoy132 ramped up its efforts in the days approaching the July 1 elections.

"Because of the electoral ban, the protest’s organizers asked the people not to carry any sign against or in favor of any candidate," Guzman wrote in an email. "The purpose of this mobilization was to promote an informed, conscious vote as well as a clean electoral process."

The marchers headed toward the offices of the country's main broadcaster, Televisa -- "a usual place for protesting these days," said Guzman, because YoSoy132 argues the networks have played favorites in the election.

YoSoy132 has not thrown its support behind any one presidential candidate or party and, like Occupy Wall Street, eschews any formal leadership or well-established list of demands. But there are a few points on which members are clear. YoSoy132 has called for democratization of the monopolistic Mexican media and criticized the presumptive next president, Enrique Peña Nieto. Members are angry about the direction their country has taken and fear that current leaders -- especially Peña Nieto -- will not push for the needed change.

"We are a movement against him because of what he represents," Guzman said. "He represents 70 years of corruption, of repression, of lies of the media because of economic interests … They are trying to sell it as a new party."

Early Monday, Peña Nieto, the Institutional Revolutionary Party (PRI) candidate and opponent of YoSoy132, declared victory after a preliminary count published by the Federal Electoral Institute showed him with a decisive lead of 37.6 percent of the vote, according to Reuters.

But even before voting booths closed Sunday, members of YoSoy132 said that their movement will grow beyond this one moment. They described YoSoy132 as the start of the "Mexican Spring."

The students and other mostly young people who have organized the group make up the next generation of Mexico: Roughly one-third of the country's 79.4 million registered voters are between the ages of 18 and 29. The Washington Post reported that Peña Nieto was winning roughly 34 percent of the vote among 18- to 25-year-olds approaching Sunday's elections.

The founding moment for YoSoy132, which campaigns primarily through social media, came when Peña Nieto visited the private Iberoamerican University on May 11. Students confronted the candidate about incidents of anti-protester violence when he was governor of Mexico state; they claim that media organizations and Peña Nieto supporters falsely portrayed those protesters as hired thugs. A YouTube video was posted shortly thereafter, featuring 131 students identifying themselves with their school IDs. Others then lent their online support by saying that they were the next, and a meme was born: "Yo soy 132" (I am the one hundred and thirty-second).

"We all got identified with it," said Guzman, 22, a psychology student at Universidad Nacional Autónoma de México (UNAM). "It was, 'I'm like you, and I feel the same.'"

According to Guzman, YoSoy132 members hold weekly meetings across the country. The group grew so quickly that by June 19 they were hosting a presidential debate with several of the main presidential candidates -- although Peña Nieto declined to attend, asserting it would be biased against him. 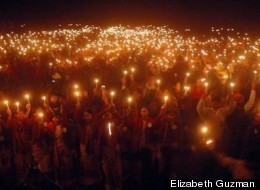 Ivan Benumea, 23, currently spokesperson for the YoSoy132 group at the UNAM law school, said that a major theme of the elections is that "many people do not believe in the country."

Although Mexico has not seen a major sustained youth movement in several decades, the youth vote helped end the centrist PRI's 70-year rule in 2000. In 2006, they nearly pushed Andres Manuel Lopez Obrador of the leftist Party of the Democratic Revolution (PRD), into the presidency over the eventual winner, President Felipe Calderón of the conservative National Action Party (PAN). Obrador disputed the razor-thin margin of victory, sparking paralyzing protests across Mexico's capital city. As Peña Nieto's closest rival this year -- he won 32.3 percent of the vote -- Obrador has now raised the specter of fraudulent elections and has refused to concede until a complete vote count and a legal review, according to the Associated Press.

Jorge Castañeda, once foreign minister of Mexico under then-President Vicente Fox of PAN, judiciously defends the current electoral system. "It isn't perfect," he said, "but it's far better than we've ever had until 2000 and comparable to many other countries with relatively young democracies."

According to Castañeda, there is fear that YoSoy132 will try to "nullify the election." He said he believes the PRD is coordinating with the movement toward this end, but it's all a little too late "to now discover all of these [accusations about electoral fraud and corruption], which are not entirely false, but they're irrelevant."

Gustavo Flores-Macías, assistant professor of government at Cornell University, believes the questions about credibility constitute the most important issue in this election. According to Flores-Macías, more than half of Mexicans believe their elections are not clean.

"Due to decades of electoral fraud at the national and local levels, people are very suspicious," he said. "The extent to which the electoral authorities are able to run the process smoothly … will play a major role towards consolidating Mexico's young democracy."

The Federal Electoral Institute, which oversees the voting process, trained nearly 1 million people as election workers this time around, according to Fox News Latino. When all the votes are counted, turnout is expected to be about 65 percent.

Journalist Luis Horacio Nájera sees a message of hope there. Even in areas that have been most affected by the drug violence, "there is greater intention to get out and vote," said Horacio Nájera, who fled from Ciudad Juárez with his family due to death threats from the cartels. (He wrote via email in Spanish from Canada, where he was granted asylum in 2010.) "This tells me that people want there to be a change in the country."

And YoSoy132 agrees. "People said that even if [Peña Nieto] wins, we certainly have woken up the campaign," Guzman said. "What we're hoping is that by these elections, we will raise those numbers of people that go out and vote."

Perspectives on YoSoy132 itself are more mixed.

"At first, I thought [YoSoy132] was something incredibly good, because young people were finally waking up after many years of being asleep," said Horacio Nájera. But he said he finds the movement's attacks on Peña Nieto troublesome, although he also said Monday that he was "really disappointed" by the election results.

Castañeda derisively denied identification of YoSoy132 with a Mexican Spring. "There were a few well-intentioned, somewhat naive students who in good faith believed a lot of stuff they were doing," he said. "Within a week or so, it's over. "

Though Peña Nieta has declared victory and PAN candidate Josefina Vazquez Mota has conceded, the official tally will come from Mexico's 300 election districts, which only begin counting July 4.

According to Guzman, meetings are already planned beyond Election Day to figure out YoSoy132's next step.

"We know the movement has a lot to do," she said. "We might not have lived the PRI regime or were too young to remember, but we know our history … People need to know their histories to know what they want and what they don't."

"The future is up to us," Benumea said. "To function as a check and balance, to get united with other social movements in Mexico and to say to the people, 'Wake up and believe in change.'"