Across the United Sates, approximately eight million people develop post-traumatic stress disorder (PTSD) every year. Among military service members and veterans that number is even higher.

Yet, as a nation, we do not sufficiently understand this mental health condition. 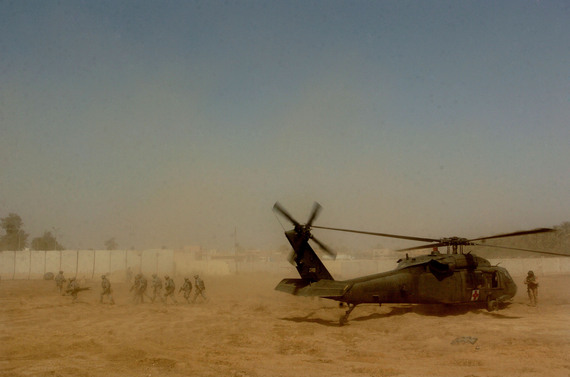 This month's National PTSD Awareness Month aims to change that through a focus on three simple actions with the power to make a world of difference for hundreds of thousands of individuals living with or impacted by PTSD - learn, connect, and share.

Learn that treatment works. Connect with someone in need. Share knowledge to raise awareness.

A mental health condition, PTSD is the result of a traumatic event that involves actual or threatened death or serious injury. The triggers and symptoms - flashbacks, avoidance, negative thoughts, and hyperarousal - are slightly different for every individual, but the impact is always life-altering.

As a former U.S. Marine, I've seen the damage first-hand.

In 1992, while on deployment in Somalia, the helicopter I was traveling in was blown up mid-flight. Four of my fellow Marines were killed. I survived, but not without nearly losing my right arm and 80 percent of my body covered in third-degree burns. A year in a burn ward and 60 operations later, I was medically retired from service. I felt isolated - without identity, purpose, or mission. I was angry and pushed people out of my life. My family took the brunt of my abuse.

And my experience is sadly far from unique. Today, hundreds of thousands of individuals cope with combat wounds beyond the visible and physical.

In fact, while 52,000 service members have been physically injured in post-9/11 conflict, as many as 400,000 live with mental health conditions, such as depression, traumatic brain injury (TBI) and PTSD. According to the Rand Corporation's study, Invisible Wounds of War, 14 percent of post-9/11 veterans -- or approximately 378,000 warriors-- met symptom criteria for PTSD.

But despite the prevalence of this mental health condition, for many reasons, significant barriers to treatment remain. They include:

• Mental health conditions aren't readily or openly discussed.
• Our society simply doesn't understand these conditions, the symptoms, or how to treat them.
• Many individuals believe they can get better on their own.
• Some struggle to secure the care they need - from finding a therapist to traveling to and paying for treatment.
• Others simply don't believe PTSD treatments will work for them. We live in a society filled with deeply entrenched stigmas around what it means to live with a mental health condition.

According to RAND, mental health stigma is a dynamic process by which a service member perceives or internalizes this brand or marked identity about himself or herself or people with mental health disorders. These stigmas take many forms. For example, the public may assume all people living with PTSD are the same or discriminate based on the false belief that veterans are at fault for developing PTSD. Others unfairly believe all veterans with PTSD are dangerous or violent.

These labels are grounded in a series of myths advanced by pop culture and the sensationalism of media. Hollywood has created a litany of characters that portray veterans living with PTSD as unhinged - one snap away from endangering both themselves and those around them.

And while this depiction may make for entertaining television, for servicemen and women, the negative impact on daily lives is very real.

Consider trying to find a job. In a poll of human resource professionals, 46 percent said PTSD and other mental health conditions pose hiring challenges. Just 22 percent felt the same way about physical combat wounds. Another report from the Center for a New American Security found that more than half of executives at leading companies hold negative stereotypes about veterans because of their concerns around PTSD and combat stress.

And on top of a myriad of external biases, the military culture itself - where seeking help can be seen as a weakness - leaves many veterans reluctant to get the treatment they need.

This has to change.

Fortunately, there are a few simple ways for everyone - the public, military leaders, and policymakers - to begin shifting the dialogue around mental health conditions like PTSD.

1. Learn. Get smart on the realities of mental health conditions like PTSD. No veteran is at fault for developing PTSD - it's a normal reaction to a life-altering situation. More importantly, PTSD is not a lifelong sentence. It can be treated and managed.

2. Connect. My life turned around when a fellow veteran reached out, helped me open up to others, and find a new mission and purpose to live. This outreach is an incredibly powerful tool for healing. No one should be ashamed of seeking help. In fact, it takes more strength to ask for help than to suffer in silence.

3. Share. Raise awareness and educate others. We will never erase the detrimental stigmas and labels that prevent so many individuals from seeking the help they need to thrive in life without sharing knowledge.

Every day I live with PTSD, but my condition is no longer my defining trait. Today, my experience has made me a better person. I know I was lucky to not only survive, but to find an identity after service and a new mission -- to make sure no one living with PTSD ever suffers in silence.

June is National PTSD Awareness month. If you or someone you know is interested in PTSD or other mental health support, please contact the WWP Resource Center at resourcecenter@woundedwarriorproject.org or 888.WWP.ALUM (997.2586).