It's amazing how ideas which were first expressed as works of science fiction and futuristic fantasy have become commonplace items in today's society. Among the famous works of fiction created by Jules Verne are such novels as Around the World in Eighty Days (1873), Five Weeks in a Balloon (1863), and From the Earth to the Moon (1865). In 1902, the French silent film pioneer Georges Méliès completed his science fiction classic, A Trip to the Moon.

Designed by Norman Bel Geddes and displayed at the 1939 New York World's Fair, the Futurama exhibit floated the idea of an automated highway system. As Bel Geddes saw it:

Futurama is a large-scale model representing almost every type of terrain in America and illustrating how a motorway system may be laid down over the entire country -- across mountains, over rivers and lakes, through cities and past towns -- never deviating from a direct course and always adhering to the four basic principles of highway design: safety, comfort, speed and economy.

Since then, such unthinkable ideas as driverless cars, underwater hotels, supersonic planes and pocket-sized computers have all become realities. In a bizarre way, the process by which a product is accepted into and becomes a part of popular culture is best demonstrated by these three depictions of Bizarro (the supervillain created as an evil mirror image of Superman). 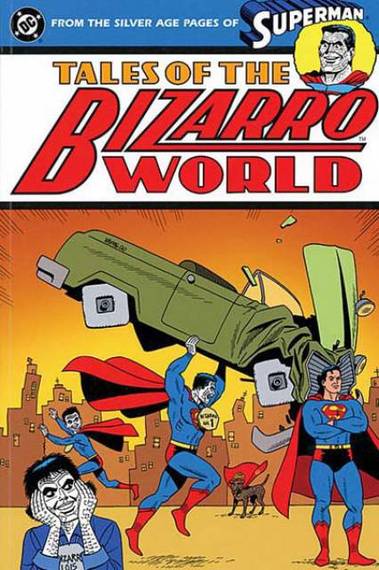 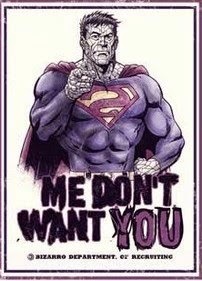 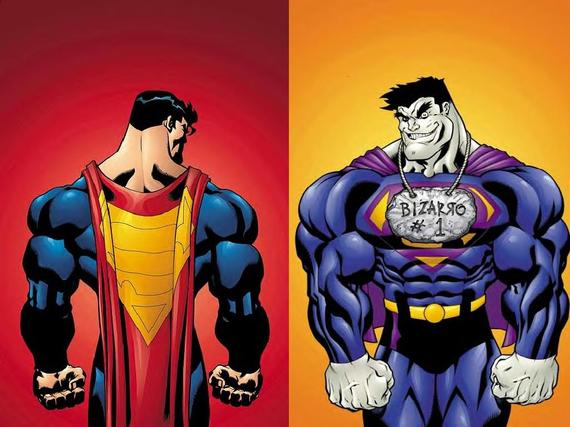 As a teenager, I remember watching episodes of The Twilight Zone on television because it was a new and daring program. Although I was too young to appreciate much of the science fiction behind the series, there was no doubt that some of Rod Serling's twisted stories were brilliantly conceived and beautifully executed.

Two of the most provocative shorts screened during CAAMfest 2015 focused on how technology has changed our lives. In a nine-minute fantasy filmed at Lighthouse Waffles and Cake in the Koreatown section of Los Angeles, director Wen Ren examined the impact of smartphones, online dating and social media on real-life interactions between human beings. Here's how the filmmaker describes what inspired him:

On February 14th, 2013 (Valentine's Day) I walked into a café in Rowland Heights with my girlfriend at the time and had a flash vision. A vision of what the future would look like.

On Valentine's Day, I saw couples with their heads and eyes angled down at their tablets and smartphones as if they were in an exclusive relationship (not with the person across the table but with their devices).

I spent about half an hour watching everyone and noticed almost ZERO human interaction throughout the café. Was this the direction of the future? More relevantly, has the singularity already happened?

I was seriously about to jump on top a table and yell at everyone to wake up and pay attention to the individual sitting in front of them (be it their lover, friend, family, etc.) but, instead of doing that, I ended up going home and writing.

The next best thing. I knew I just had to make a futuristic comedy farce about how incredible yet stupid our future would look. This became my film, Cafe Glass. 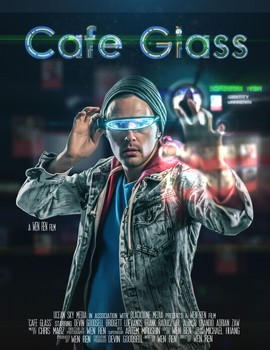 Ren's visually gorgeous film stars Devin Goodsell as Zayne (his online name) who, in real life, is simply known as Steve. The film takes some vicious swipes at "Glassholes" (people who were quick to purchase Google Glass devices) as they try cruising an Internet café in which their technology allows them to zoom in on any person and immediately check out their online profile to see whether or not that person is worthy of attention. 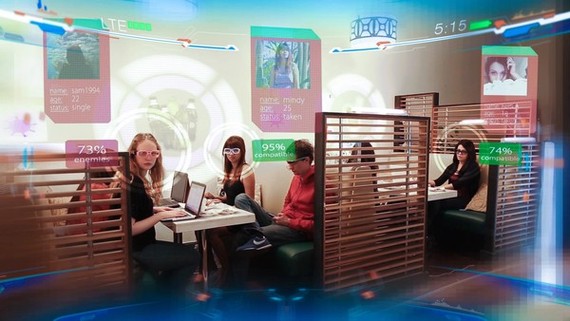 A scene from Cafe Glass

When the café's network goes down (and everyone suddenly loses their connectivity), people become increasingly agitated as they are forced to stop hiding behind their technology and must instead resort to the basic social skills they learned as children. Can they succeed at offline dating? Here's the trailer:

For those who have followed the Death with Dignity movement or wished that euthenasia was legal in the United States, the style and spirit of Rod Serling will seem oddly evident in Juhee Jane So's stunning eight-minute short entitled 2050: A Room of His Own.

Four decades after Apple introduced Siri to consumers, technology has evolved to new levels in a world where little, if any, human contact is the norm. But don't take my word for it. You can watch 2050: A Room of His Own in its entirety in the following video:

Crowded Fire Theater recently presented the West Coast premiere of Idris Goodwin's challenging cultural comedy entitled Blackademics (otherwise known as The Black Academic's Guide to Winning Tenure Without Losing Your Soul). The action takes place in an extremely exclusive and mysteriously minimalist restaurant (a stark unit set designed by Mikiko Uesugi that ominously features a wide variety of cutting boards on its walls) which aims to give its customers an unforgettable experience with its unique approach to "endurance cuisine." 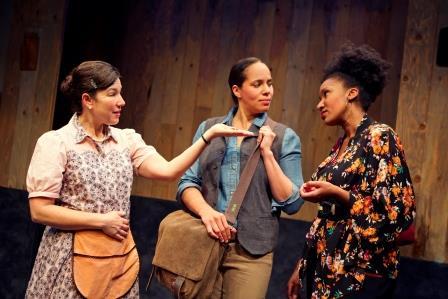 Some claim that Goodwin's play is an absurdist take on post-racial America. However, I saw it as an updated version of Hansel and Gretel in which the restaurant's strangely mannered hostess, Georgia (Michele Apriña Leavy), is a modern-day equivalent of the witch, Rosina Daintymouth. Her dinner guests on this particular occasion are: 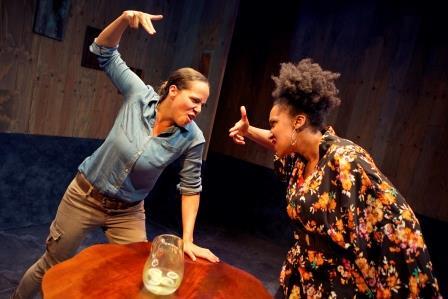 Lauren Spencer (Rachelle) and Safiya Fredericks (Ann)
in a scene from Blackademics (Photo by: Pak Han)

Under Mina Morita's direction, Ann and Rachelle end up airing lots of grievances, trying to one-up one another, and vying for each little tidbit (a bean, a glass of water, a salad, a chair) that Georgia is willing to bestow on one or the other. But when Georgia's murderous intentions finally become clear, the two women that she has drugged realize that their only way out of a desperate situation is to join forces to kill off the hostess with the mostest. 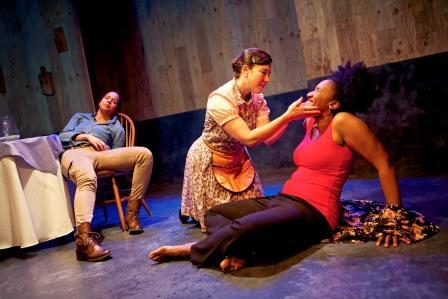 Initially fueled by hunger, jealousy, resentment and pride, Ann and Rachelle struggle to regain control of their limbs after Georgia (who, earlier in the play, insisted on confiscating Ann's smartphone) has basted Ann's arms and face with coconut oil, handed Rachelle a knife and fork, and reappeared with a meat cleaver.

Goodwin has written some wonderful zingers for Ann and Rachelle although I must admit to being unfamiliar with quite a few cultural references. For much of Blackademics, Georgia gets solid laughs merely for her quirkiness. But as the two African American professors fight for their lives, it helps to remember a comment Ann made at the beginning of the play (when she recalled that the university had even picked out this restaurant for her celebratory dinner). Could that mean that the university has its own outsourced mechanism for making sure that African American professors don't get very far? You be the judge.

Although there are moments in Goodwin's play when Ann and Rachelle spout enough "academic talk" to make one's eyes glaze over, the energy level switches from friendly competition to unhinged desperation once they realize what it will cost to earn a seat at Georgia's table.