We are experiencing a renaissance in figurative painting and Paul Booth Gallery in New York has stepped up in favor of it's advancement by hosting an exhibition of large scale works by the Norwegian figurative painter Odd Nerdrum titled Crime and Refuge. An entire generation of painters has been influenced by Nerdrum and his ability to communicate the human experience with his mastery of the material. I met with the painter last week at his home in Norway and he shared some valuable thoughts.

The Renaissance looked to the past, taking the best it had to offer and used it to build a better, more civil society. Drawing from an article by Nerdrum, Overcoming the Germanification of Europe, whose text can be found on the gallery wall or on the painter's website, and which I paraphrase, the Renaissance looked back on the classicism of the ancient Greeks and by drawing it into dialog with Christendom, heretics were no longer hunted and Europe began to breath again. Unlike a cultural ideology such as we experienced in the 20th Century, in which everything must be new and representative of it's time, the ideas behind the renaissance in painting that we are talking about, the Post Contemporary Paradigm, or more specifically what Nerdrum calls Kitsch (I refer you to his book On Kitsch, of which a new edition is now available), are taken from the past and we are working with them, in the hopes of creating a more civilized society for us and our children. 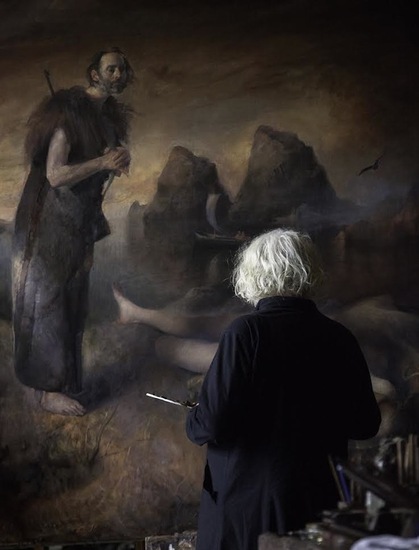 Odd Nerdrum at work on Father Finding His Son

Civilization is defined by the advancement of a humane culture. It is refined in taste and manners and is ethical and reasonable. Throwing someone out of a room or a discussion simply because they do not agree with you is not civilized behavior. A hallmark of civilized behavior is to be sophisticated, tolerant and educated. It is to be knowledgable about the ideas that came before and be able to use them, to discuss them with those who disagree.

Nerdrum points out in his article that according to Emmanuel Kant, who's philosophy Nerdrum identifies as the origin of Modernism, "the critic must be a person who lacks knowledge about the work he is considering, and he adds that the critique should not be aimed at cleverness or technique, but genius, pure and untouched genius." Isn't this the opposite of civilized, to go at it, as many of today's artists say, without really knowing where it comes from or what they are doing? Wouldn't a civilized culture build on past achievements, time tested techniques, rather than discarding them?

In the Post Modern Paradigm good art cannot be distinguished from bad art without the aid of the curatorial, the so called trained art historians to tell us which is which. As with propaganda we become *educated" according to which program we listen to. There is no cohesive understanding among us as to which is which and who is important and who is not. When terrorism is countered with lies, deceit and murderous behavior, the villains and the heroes end up in the same uncivilized camp, indistinguishable from each other except by the biased relationships and opinions of the observer. With such a philosophy we become distant and unrelated, thus unimportant, to each other. What of the news stories we never hear which may be of more interest to us? What of the painters whose work never reaches us because the historians have deemed it unimportant even though it may be of more interest to us? Representational painting gives us a common cultural foundation to invent from. As Aristotle said, an audience is rejoiced trough identification.

I have heard Nerdrum's work criticized for it's difficult subject matter, but in my opinion he is just showing the honest nature of things. We do not criticize Shakespeare for revealing King Claudius or Goya for commemorating the 3rd of May so we should not criticize Nerdrum for telling stories about the uncivilized side of human nature either but rather listen to what he is saying so that we may learn something of ourselves. As Vincent Desiderio says in the video on the galleries website, "In the Renaissance they were using their minds to express things that were beneath the subject matter and I think his (Nerdrum's) work has done that."

Some of the paintings in this exhibition for instance, portray the darker side of human behavior and as Daniel Maidman pointed out in an excellent article about this exhibition for Whitehot Magazine, titled Nerdrum's Nightmarish Execution, "Nerdrum's hooded figures wander in a dim wilderness, coming together to participate in scenes of savagery or persecuted communion." True, he portrays the the alien, the discarded refugee and those that society has a hard time looking at but there is another side of us too that can be seen in Nerdrum's paintings, for he gives us the full gambit of our existence. 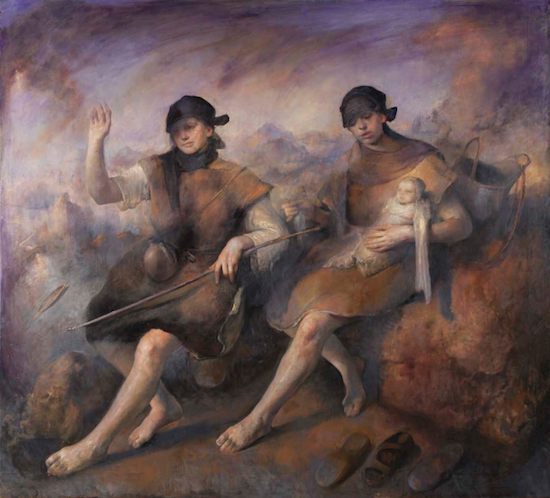 On the Border by Odd Nerdrum

The painting On the Border for instance, shows a coupled with a baby, crossing over a high mountain pass with few possessions, one of them caring attentively to a small child who glows like a jewel, a treasure being carried from one land to another for reasons we can only surmise. The gracefulness of their limbs, the rhythm of the travelers legs and the beauty of the distant clouds echo more to the fact that these are sensitive human beings, rather than savages. 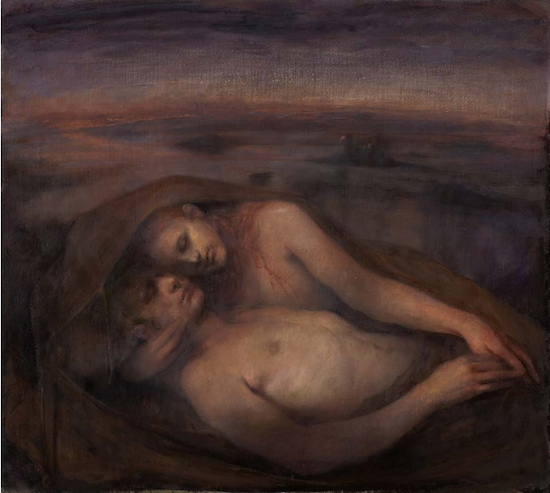 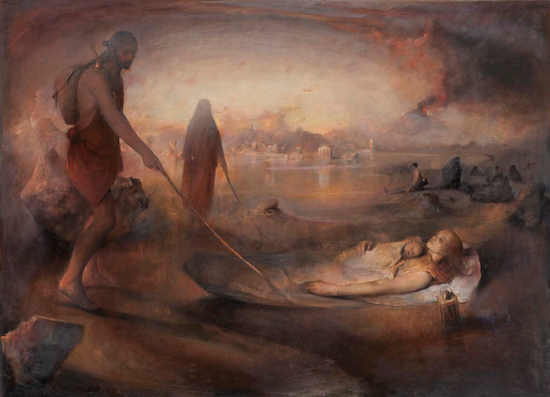 The Blinds by Odd Nerdrum

Throughout his career Nerdrum has depicted people who are blind but in recent years they have become more prominent. This may have something to do with the fact that in spite of his successes, his paintings are still overlooked by most art historians who are following predetermined rules, who refuse to see what is right in front of their face. There is beauty that lies there sleeping, waiting to be discovered, uncovered like ancient texts that could enlighten them. Critics and historians have bought into the idea that we should throw out the old, that painting is dead, and who in doing so throw out the baby with the bath water in their blindness. People sometimes like to tell the story of the one that got away, sad that they did not know what they had until it is lost. Perhaps when Nerdrum is gone they will shake their heads and say, "I should have added that one to the collection when I had the chance", or, " If only I had known then what I know now". Poor fools. 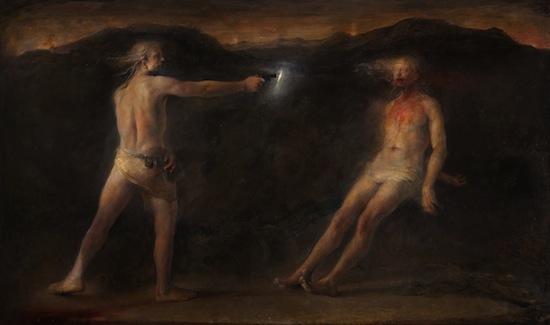 No Witness by Odd Nerdrum

One painting is titled No Witness. At the edge of darkness a man is being shot, disposed of at the hand of a lone gunman. Is it as Maidman suggests, a view of humanity as unredeemable or is it more personal? Is it Nerdrum himself being done away with, left to die in the the recesses of a culture too uncivilized to realize the talent that it had the opportunity to cultivate but didn't? Does the gunman really think nobody is watching? Does the cultural establishment think that Nerdrum's work will be relegated to the dustbin of history or that nobody will notice if he hauled off to die in prison? Those who admire and emulate Nerdrum believe otherwise. If one looks closely there are many witnesses peering out of the shadows into the light. In fact, you are one of them.

This exhibition has been on view at Paul Booth Gallery in Manhattan for 3 months and ends this week. However, should you be curious, should you be one of those who want to own a painting by Odd Nerdrum, who is clearly one of the greatest living painters and who has influenced an entire generation of painters aiming for a more civilized society, contact Casey Gleghorn at Paul Booth Gallery and he will steer you in the right direction.