The Shiraz-Persepolis Festival of Arts was an international festival held in Iran every summer for eleven years, 1967-1977. Jashn-e Honar-e Shiraz as it was popularly known in Persian was an inspired and feverish exploration, experimentation and creative conversation between Iran and the outside world that unfolded primarily through music, drama, dance and film. The programs started at 10 a.m. every day and ended at 1 or 2 a.m. the next, staggered across ancient, medieval and modern venues, some natural, some formal, others makeshift, in Shiraz, or forty miles northeast at the Achaemenid ruins of Persepolis and Naqsh-e Rostam. True to its mission, the festival's ecosystem cut across time and other boundaries, refreshing the traditional, celebrating the classical, nurturing the experimental, and stimulating a dialogue across generations, cultures, and languages, East and West, North and South.

Shiraz, "without doubt the most important performing arts event in the world...,"3 was where most Iranians first encountered the traditional arts of Asia, Africa and Latin America-- Indian raga music, Bharatanatyam and Kathakali, Qawwali, the music of Afghanistan, Egypt, Iraq, Korea and Vietnam, Balinese Gamelan, Japanese Noh, the drums of Rwanda, traditional dances of Bhutan, Senegal, Uganda, and Brazil . . . The experience was eye-opening, expansive, magical, and transformative. 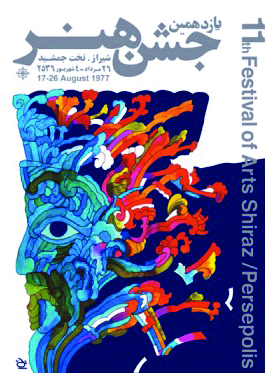 Shiraz is also where Iranians came to 'rediscover' their own traditional music on a different platform. Presented by master musicians on an international stage before large publics for the first time, this exquisite art form acquired a fresh vitality and just recognition and gained new fans, especially among youth. Regional music from the four corners of the country was also presented at the festival, with the same result. And that is not all. It is at the Shiraz Festival that Iranian audiences witnessed the revival of Persian storytelling and dramatic traditions on a large scale, naqqali, ta'ziyeh/shabih-khani and ruhowzi, celebrated a new generation of Iranian filmmakers along with cinema legends from East and West, and watched the spectacular birth of new Iranian theatre--playwrights, directors, set designers and actors fearlessly writing and staging innovative plays in Persian that for the first time resonated globally. Five groundbreaking works by Iranian dramatists were invited to festivals in the West, including Arby Ovanessian's staging of Abbas Nalbandian's equally original début work, Pazhouheshi . . . (1968)4 that virtually transfigured and modernized Iranian theatre, and Esma'il Khalaj's Shabat (1976).

A distinguishing feature of the Shiraz Arts Festival was the variety of unique works it commissioned from pioneers of contemporary music as well as avant-garde theater and dance, works that embodied a transcendent blend of East and West and were shaped by the landscape for which they were created. These were, in music, Iannis Xenakis's Persephassa5 and Persepolis (1969 and '71, respectively), and Bruno Maderna's Ausstrahlung, a spiritual journey through history that integrated recitations of Persian poetry (also in '71); in theatre, Peter Brook's Orghast, a "work in progress" (1970) that involved actors of diverse nationalities, Iranians among them, and an invented idiom that included Avestan, Greek and Latin; and in 1972, Bob Wilson's KA MOUNTAIN . . . which ran non-stop for seven days and nights on a hill at Haft-tan with the participation of American and Iranian actors and nonprofessional locals; and last but not least, in dance, Maurice Béjart's Golestan (1973), named after Sa'di-e Shirazi's 13th century literary masterpiece and choreographed entirely on Iranian music.

Tens of thousands of admiring spectators experienced the festival each year on site. Millions more had the opportunity to watch the recorded programs on national television throughout the year. The festival operated on a starting indie budget of $100K that grew to $700,000 in 1977. The budget was subsidized in part by the state but mostly by the National Iranian Radio and Television (NITV/NIRT)6, which offset its costs by airing the programs as part of its broadcast schedule. Ticket sales generated some revenue; most travel costs for foreign artists were taken up by governments that had bilateral treaties with Iran; and the artists, thrilled by the opportunity to explore and innovate in a singular environment, accepted minimum fees and no extra funds for commissioned or world premieres of their work.

To be sure, the festival's fans, artists, and organizers represented a minority of the general population in Iran; the majority had little or no awareness of, interest in, or access to the likes of Balachander, Béjart, and Bijan Mofid. But that was precisely the point, to bring down the wall between the culturally privileged and underprivileged, to celebrate and share humanity's artistic wealth as widely as possible for the benefit of larger publics, especially the younger generation. The vision was all the more meaningful given the state of the country as a whole. Many dream of making the world a better place; some dare act on their dreams. Others slumber in the luxury of stagnation. Jashn-e Honar never slept.

The idea for organizing an international festival designed to "nurture the arts, pay tribute to the nation's traditional arts and raise cultural standards in Iran" and to furthermore "ensure wider appreciation of the work of Iranian artists, introduce foreign artists to Iran, and acquaint the Iranian public with the latest creative developments of other countries"7 originated in 1966 with Empress Farah Pahlavi, Shahbanou Farah in Persian. The responsibility for shaping and executing the concept was delegated to Reza Ghotbi, then project manager for television at the Plan Organization, later director general of NITV.

An advisory board was formed that charted the festival's scope and principal goals. In Ghotbi's words, the festival would present all the arts "in the context of an encounter between East and West" with a focus on "the best traditional arts of the East, the finest classical traditions of the West, and the avant-garde apropos its place in the world."8 The festival would also undertake research and pursue activities in the creative domain.9

Most cultural activity being centered in Tehran, the group decided to host the festival away from the capital thinking that the effort to make the trip and the concentration of artists and festival-goers in one location would enrich the experience, "like an artistic pilgrimage." After considering Kashan and Isfahan, their choice fell on Shiraz. The city offered a variety of venues such as Hafezieh, Delgosha Garden, Saray-e Moshir, Narenjestan, the Jahan-Nama Garden . . . and not far off, the magnificent ruins of Persepolis. The Mehmansara provided hotel accommodation--not luxurious, but adequate and in line with the festival's identity -- as did the newly built Pahlavi University student dormitories.

To govern the festival, a 31-member board of trustees was formed under the patronage of Empress Farah comprised of cabinet members, university chancellors, provincial authorities and other officials, and individual scholars, cultural figures, and custodians of properties earmarked as performance venues. The trustees, who served for two-year terms and who changed over time were responsible for approving the budget and the bylaws, nominating the board of directors, and appointing an inspector for financial oversight.

The Shiraz-Persepolis Festival of Arts officially opened on 11 September 1967 (20 Shahrivar 1346), less than a year after NITV televised its first program.

2. The primary printed sources for content and images for this report include the Shiraz Festival catalogues, bulletins, program notes, and Tamasha Magazine, 1967-1977. Supplemental data were provided by individuals with firsthand knowledge of the Festival, Reza Ghotbi, Sheherazade Afshar, Bijan Saffari, and Arby Ovanessian, as well as Parviz Sayyad and Mohammad-Baqer Ghaffari. Secondary sources include, in Persian: interviews with Farrokh Gaffary (1984) and Bijan Saffari (1983), Foundation for Iranian Studies, "Program for Oral History;" "Jashn-e Honar-e Shiraz," Kargah-e Nemayesh az Aghaz ta Payan, 1348-1357 (The Theatre Workshop from Beginning to End, 1969-1978), Setareh Khorramzadeh Esfahani, ed. Tehran: Afraz, 1387: 101-199; "Jashn-e Honar-e Shiraz-Takhte- Jamshid: 1346-1358," Yad-ha va Boud-ha: Khaaterat-e Iraj Zohari. Tehran: Mo'in, 1382: 171-227; and in English, "Iran," The World Encyclopedia of Contemporary Theatre: Asia/Pacific, Don Rubin, et al., eds. London/NY: Routledge, paperback ed., 2001: 191-221. This is a fairly comprehensive but by no means exhaustive account of the Festival; it omits countless artists and other relevant information due to considerations of space. All data have been meticulously reviewed for accuracy. All omissions, editorialized commentary and concluding remarks are the personal views and the sole responsibility of the author and do not necessarily represent the sources that contributed to this report.

3. One of many such accolades by foreign critics over the life of the festival, excerpted from an article by Professor Enrico Fulchignoni, director of UNESCO's International Committee for Cinema and Television, first published in Il Tempo at the close of the 9th festival in 1975, translated in Tamasha No. 246 (1976): 74.

5. Co-commissioned with the French Ministry of Culture.

7. Excerpts from an address by Empress Farah Pahlavi at the inaugural festival. Festival catalogue 1967.

9. The festival's principal programs were music, theatre, dance, and film (described separately below under "Programs") seminars and conferences, and related publications. Poetry and painting, exhibitions of Persian carpets and handicrafts, children's theatre and dance workshops, and other special and intermittent programs organized by the festival are not covered in this report.