Thinking about making your annual list of New Year's Resolutions? Do yourself a favor this year, and don't make yourself some lofty list of goals you want to achieve with things like "stop smoking" or "stop selling my vital organs on the black market, I only have one kidney, lung, and half a brain left."

Instead, I have three resolutions you should consider making, all aimed at making you feel like you've actually accomplished something last year. I believe in setting the bar absurdly low for these kinds of things, because as an American, I know holding myself to a slightly lower standard is the best way to feel like an overachiever. 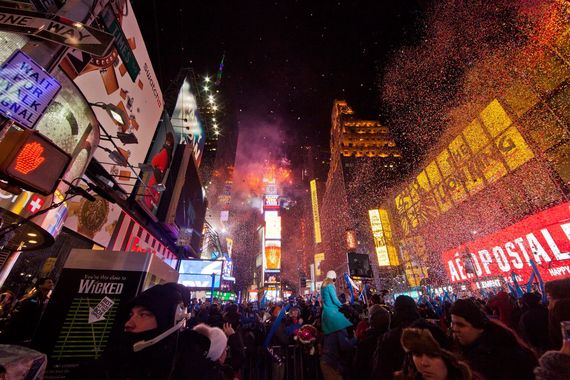 "This year, I will NOT cure cancer."

Now, I get it. On the face of it, this is actually a terrible resolution, because we all know cancer is bad. We should be doing everything we can to stop it. But are you a cancer scientist? Hell, are you any kind of scientist? Even if you are, think about it - maybe instead of curing cancer you'll come up with a way to make potato chips taste like something other than a fried potato!

It's a great feeling following through on one of your resolutions. Just imagine how accomplished you'll feel when you don't rid the world of cancer.

"This year, I will silently pass judgment on someone."

Sure, maybe we all say we're open minded, caring, and compassionate, but we also all know people who are totally worthy of our scorn and derision. Maybe it's the guy who doesn't have the same political beliefs as you, maybe it's the guy who genuinely thinks Taco Bell is a close approximation of Mexican food. Everyone has someone in their lives they can feel better about themselves by judging, so this resolution is all about pumping yourself up at the expense of others.

The key though, is to do it without uttering a word of it. Just keep all your thoughts about what a complete idiot/moron/jerk/Godless heathen they are corked-up inside of you, and then when it makes sense, defame their character a bit to someone you mutually are acquainted with, and before you know it, you're checking a second item off your resolution list.

"This year, I will stop taking advice from people just because they're published on the Internet."

Go out to your local Google shop and you'll find the shelves stocked with self-help columns. Advice on how to break up, make-up, wake up, shake up or bake up your life can be found around every corner on the Internet. Often times, this advice can be exactly what we need to navigate a tough decision or situation in our lives, but other times, it's advice written by people just as damaged or confused as we are.

How do you know that guy giving you advice on how to tie your shoes, grill a steak, or write a list of New Year's resolutions actually knows what he's talking about, and isn't just some random schmoe on the Internet bloviating about something so he can get some much-needed attention and ego stroking in his life? You can't know, so this is the year to put all the advice columns to rest, don't you think?