YOU CAN DO SOMETHING ABOUT IT is a series of candid interviews with the passionate men and women who are leaders, activists and influencers on the subject of gun violence in America. Some have been my teachers, champions and support system on this very complicated and emotional journey and some I have admired from afar for their bravery, audacity and indomitable commitment to the cause. Although our backgrounds, experiences and the challenges we face in our work are as complex as the causes and the solutions to this epidemic, all have shown that there is more that can be done to end the senseless loss of human life that occurs in this country every 16 minutes every day due to guns.
I am proud to introduce you to each of them and excited to share their insights into how all of us can be a part of the solution to Raise The Caliber of our communities. 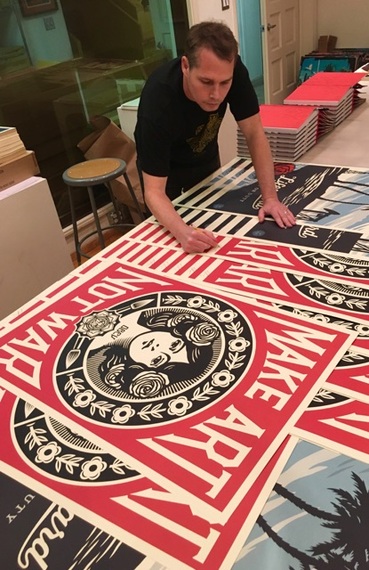 Where do you live? Los Angeles, California

What quote do you live by? "The future is unwritten." - Joe Strummer

What are you most proud of about your work/life?

"I'm proud that beginning with few resources I've been able to build a career and an audience through my art, which many people have said inspired them to speak their mind and use their talents. In my life I'm proud that I have an amazing family and my kids seem to be turning out okay, even though everything I believe in at one point or another my parents said would be the road to ruin.

What is the biggest challenge you face in your work?

"Finding the balance between making the work that is visually appealing but also communicates the messages that I think are important."

Why do you think we have such a problem with gun violence in America?

"We live in a country that has largely glamorized the myth of the armed hero who protects the powerless and saves the day.

The statistical facts demonstrate that the introduction of a gun into a household is far more likely to result in a death by accident, suicide, or homicide from a family member than it is to be used in a justifiable act of self defense."

What do you think is the biggest misconception about why we have such a problem with gun violence in America?

"I think there are several, but I frequently hear the argument that it's purely a mental health issue when yes, there are many instances of mentally unstable people resorting to gun violence, but there are also people who are only momentarily mentally unstable due to an impulsive emotional response or drugs and alcohol. I think we've all done something we regretted a moment later and the scale of that regret might be dependent on the tools we have such as guns, to make the scale of the error larger. Even though I'm very opposed to assault weapons and high capacity magazines, because of the amount of destruction they can cause in a short amount of time, I think that the pervasiveness of hand guns is the bigger problem."

Do you think there a law that the government could enact that would really make a difference in reducing gun violence and building safe communities?

"I think in the short term, closing the gun show loophole so there is no situation when the gun can be purchased without a background check is important; but in the long run I'd like to see guns with safety features similar to those on a smartphone like a thumbprint or a personal code that allows only the owner of that gun to use it.

What are three things the average American citizen can do to "Raise The Caliber" of their community?

"1 - Support buyback programs to get illegal guns off the street.

2 - If you are a gun owner, do what should be obvious and logical, keep your guns unloaded and out of reach of children.

3 - Learn how to use a gun properly. A gun is a serious amount of responsibility to learn how to use at all. I grew up hunting with my father and he would not let me shoot a gun until I had been through many steps of education and precaution."

Is there a must read book or article on this topic that has educated and inspired you?

"I've read lots of things that help me to understand that the United States is extreme in its number of guns and obsession with gun rights and the second amendment; I've also read many things that explain that guns make households less safe, not more safe, but a couple of the things that affected me emotionally about guns came from pop culture. Even though Lynyrd Skynyrd are southerners and one might assume that they would be gun advocates, their song "Saturday Night Special" spoke strongly about the perils of guns and tragedies that can come from guns. Also the movie "Boyz n the Hood" affected me because guns were so commonplace and part of macho posturing that it seemed to lead to a decreased respect for the value of human life."

About the Editor: Jessica Mindich began the Caliber Collection in January 2012 as a collaboration with the Mayor of Newark, NJ, Cory Booker, as a way to turn illegal and unwanted guns from our cities' streets into jewelry. Their vision was to create a virtuous cycle by funding gun buyback and amnesty programs from the proceeds of the sales from the Caliber Collection. The jewelry is made with the serial numbers from illegal guns and the metal from shell casings. The Caliber Collection donates 20% of the net proceeds to fund voluntary gun buyback and amnesty programs in some of the toughest cities in America. To date, they have taken over 1,000 illegal guns off the streets and have raised over $100,000 for police departments in Newark, Hartford, the San Francisco Bay Area and Detroit from the sale of Caliber products to customers in over 85 countries.
From the success of the Caliber Collection, Jessica created The Caliber Foundation, which offers support to victims, families and communities who have been affected by illegal gun violence. The Caliber Foundation is the proud recipient of grants from MTV, Shepard Fairey/Obey Giant and The Serena Williams Foundation. Jessica is also the founder of the Raise The Caliber initiative, a National advocacy campaign to end illegal gun violence. Proceeds from partnerships under Raise The Caliber are donated to the Caliber Foundation.
www.calibercollection.com