Those Republican presidential candidates who had been governors, vied with each other in their latest debate to claim who had cut taxes the most.

When I hear tax-cutting expounded as an unassailable conservative virtue, my mind goes back to a lunch in Houston in the 1970s, when two of conservatism's rising stars and I were speakers at a meeting of the American Petroleum Institute.

The stars were Trent Lott, then a member of the House from Mississippi, and George Will, the hottest columnist burning up the op-ed pages across the country.

The three of us were urged to lunch together while the organizers got organized. I had recently launched The Energy Daily, a publication in Washington, D.C.

So, I ask, how did we get to where we are today, when Republican presidential hopefuls are firmly committed to tax-cutting; when every state or local Republican governing body would rather see chaos reign -- as has happened with our cities -- than whisper that we should raise money to fix the problem?

The standard-bearer for taxophobia is neither an elected official nor a presidential hopeful. He is Grover Norquist, founder and president of Americans for Tax Reform, a political organization as powerful as the National Rifle Association, and as distorting of the national agenda.

Norquist has introduced a rigidity that makes discussion of tax policy almost impossible on the right. Tax has become not a matter of need and policy, but a litmus test of conservative purity.

The genesis of taxes as an evil goes back to a group of young conservatives -- which included Norquist -- with a consuming conviction that government is too big, and that the only way to cut it down to size (what size?) was, in their phrase, to "starve the beast."

The problem is that Americans keep asking more of their government, and consequently it grows. We want more diseases to be researched by the National Institutes of Health, and more energy solutions to be developed by the Department of Energy. We want the food chain to be secured and nuclear waste disposed of. We want better roads, bridges, airports and air traffic control. When something untoward happens, like bee colony collapse or the disappearance of a strain of bananas, we want the Department of Agriculture to find a fix.

All those without a mention of providing social services, extending entitlements and beefing up the military -- all favored by the public.

The trouble gets worse when tax-cutting becomes an ethic, because even good taxes are an anathema to politicians, who are wont to start their political lives by signing Norquist's "no new taxes" pledge. 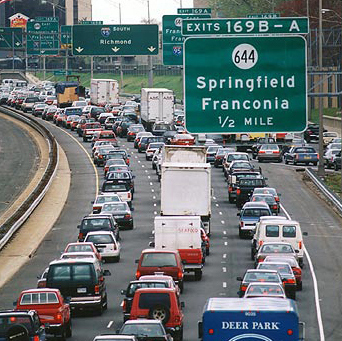 A Tax on You: Traffic on I-95 in Fairfax County, VA

Take the mess the highway trust fund is in. It is funded in fits and starts by a conflicted Congress, trapped between what it knows to be need and the desire to limit spending. Infrastructure needs to be funded in multi-year programs. Before the recent budget deal, it was funded for just three months. Can anyone build a bridge in three months?

The danger of blind tax hatred can be seen with the gas tax. It is generally agreed that using less gasoline would be a net good: fewer oil imports, fewer greenhouse gases and more livable cities. Today's price is low, even by historical standards.

An opportunity that may never come again exists to fix much of the nation's crumbling infrastructure by increasing the federal gas tax from its present 18.4 cents per gallon, where it has languished since 1993. There is enormous elasticity in the amount of gas an individual or a family uses. You can buy a smaller car or a hybrid, or travel less. The price of gas is not like the price of shelter.

Many of the ills that contribute to the sense that the nation has lost its way would go away with better roads and general infrastructure improvement. You do not feel good waiting to cross a bridge or idling for hours on Interstate 95.

Sitting in a traffic jam for two hours in the morning and two hours at night may not qualify as a tax, but it is taxing. -- For InsideSources.com