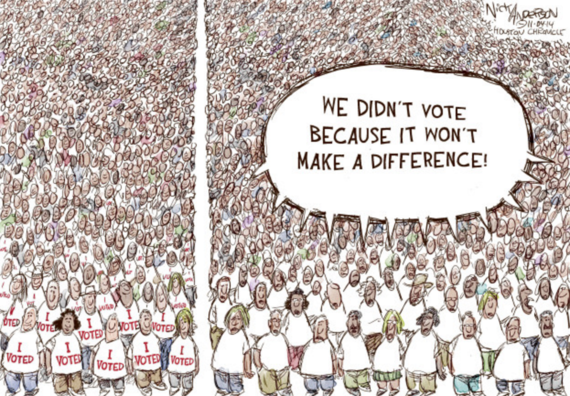 According to recent data from the U.S. Census, voter turnout in the United States is currently amongst the lowest in the entire developed world. In the last presidential election, only 53 percent of Americans voted. There are over 240 million voting-aged Americans, yet over nearly 100 million consistently choose not to vote. This leads to the million-dollar question: Why?

When asked after the last presidential election why they chose not to vote, 59 percent of non-voting Americans believed that there is no point in voting because "nothing ever gets done," 54 percent justified not voting because they believe the U.S. Government is "so corrupt," and 37 percent believe that voting "doesn't make much difference my life."

This is a huge problem. We are talking about nearly half of our eligible voting population consistently choosing not to vote, even though they literally have the ability to determine who will run our nation. It's time we change that.

I sincerely believe every single voting-aged American should vote and by the end of this article, you will too.

This influence is represented by the state's electors, more formally known as the Electoral College. The number of electors a state has is determined by its number of districts plus the two U.S. senators of that state. So California has 55 electors (53 districts plus 2 senators) while Kansas has 6 electors (4 districts plus 2 senators). When a candidate wins the voting in a state, they win that state's electors, which is why "big" more populated states are so important to presidential candidates. If you add up the electors in all of the states and the District of Columbia, you get 538 electors. In order to win the presidency, a candidate must win 270 electors. And this all happens with your vote.

"My vote won't count."
The biggest reason why Americans choose not to vote comes down to simply feeling powerless. However, the fact of the matter is this: your vote matters a lot. Yes, it's true that the Electoral College elects the president, but never forget that it is us, the American people, that decide who the Electoral College MUST support. For example, if you live in the State of California and the majority of the people in your state choose to vote for Senator Bernie Sanders, then he will win your state's 55 electoral votes. That's over 20 percent of the electoral votes he needs to win the presidency. It's as simple as that. And it all started with your vote.

"What's the point of voting when I already know my state will swing Republican/Democratic?"
The second biggest reason why Americans choose not to vote comes down to the belief that their state will inevitably support a specific party. If I am a Democrat, why should I bother to vote when I know my state of Texas will definitely support a Republican? In the 40 non-swing states, this is a very common question. However, you must understand this: A state only swings to one party, because the majority of people WHO VOTED support that specific party. This "inevitableness" can definitely be countered by your vote. For example, in states that historically swing conservative, like Texas, Oklahoma, Arkansas, Alaska, Arizona, and West Virginia, less than 50% of the voting population voted in the past presidential election. This means that the over 50% that chose not to vote could have definitely overpowered the conservative vote and awarded that state's electoral votes to the opposite party. That's 70 electoral votes right there, over 25% of the votes needed by a candidate to win the presidency. And it's all done with your vote.

"Why should I vote? It's not like it will affect me."
One of the biggest reasons Americans choose not to vote is because they have a sense of apathy towards politics or voting. The fact of the matter is this: Whether or not you like it, every single aspect of your life is affected by politics and every single one of those politicians were put in power through a popular vote.

"As a minority, my vote doesn't matter."
Candidates know who votes ("their voters"), and they shape their policies based on voter turnout demographics. Before you ask why candidates like Donald Trump can get away with making hateful statements and policies against Hispanics, tell me why less than half of eligible Hispanics vote. Before you ask why politicians seem to not care much about #BlackLivesMatter, tell me why non-whites make up only 26% of all voters.

Never let the term "minority" make you think the vote of your ethnic group is insignificant. It is rather, your most powerful political tool. For example, take a look at Muslim voters. Muslim Americans make up less than one percent of the U.S. population, but experts say they could play a very significant role in presidential elections due to their concentration in key states like Florida where Bush won by just 537 votes in 2000. The minority vote is incredibly powerful, never doubt that for a second. Find the candidate you believe best supports the interests of your demographic and encourage all those in your communities to support them. You'd be amazed by the difference this will make.

Your vote matters. It really does. I can talk about how millions of Americans died so that we can live in a nation of democracy and freedom, but this is not about giving you a history lesson. This is about reminding you that your vote is your voice, that your vote is your tool of political empowerment, and that change in this nation can best be brought about through your vote. There are several primaries coming up and you have the opportunity to decide who you want to be president, all you have to do is vote.