Watching kids play on school playgrounds can break my heart. There are always some who stand alone, unsure of how to enter play. When they try, they are told they may not join the game. After a while, they just stop trying.

I know that all teachers remember the sting of rejection at some point in their lives. And yet, they are often hesitant to say no or stop when they see children excluding one another at school. Instead, they reason with them over remarks like: No boys allowed or You can't be in this game or You can't come to my birthday. They hope they can teach their students to have empathy for others or at least to have better manners. They hope the kids will learn that words can hurt as much as hitting and that bullying is not allowed. Sadly, sometimes teachers tell themselves that this is just how kids are. 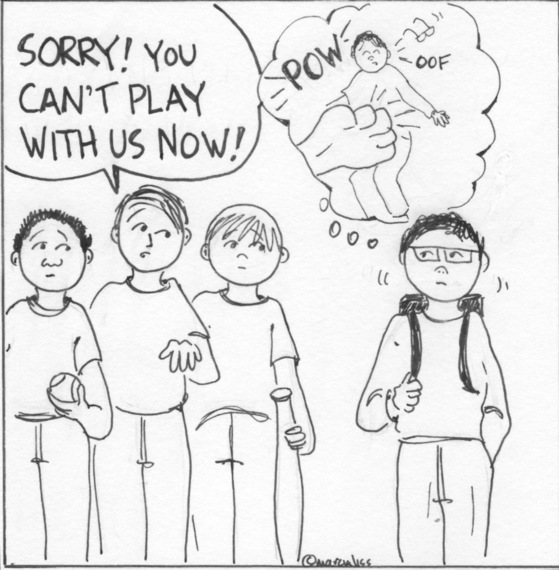 Teachers of young children often feel that their efforts to correct excluding and bullying behavior fall short. The children may mouth the correct words (Sorry or We'll play with her later), but the adults know they aren't really sorry and they don't really intend to include the rejected child in the next game. Perhaps teachers are expecting too much from kids. After all, the world is certainly cruel enough, and the adults in charge don't seem to be able to do much to change that reality.

When I was director of Cherry Preschool in Evanston, Illinois, we decided to tackle this issue head on. We borrowed the ideas of Vivian Gussin Paley. In her book You Can't Say You Can't Play, Ms. Paley states that the classroom is not a private place. Just as there are rules governing a multitude of school behaviors, there should be a rule governing the right of all children to participate. In addition, she believes children are often excluded from play out of habit rather than for any real reason. In other words, "exclusion is written into the game of play. And play, as we know, will soon be the game of life."

Once Ms. Paley instituted the rule You "Can't Say You Can't Play" in her classroom, many good things followed. New friendships were forged as children got to know other children. Children felt relieved (even the ones who did most of the excluding). Teachers could handle issues of exclusion simply (You forgot the rule) rather than approaching each instance as a moral puzzle to be solved.

After my preschool adopted this rule, it became a fundamental part of our approach to education: All children should feel safe and accepted in our school community. It was as simple as that. No more lectures. No more moral dilemmas to referee.

We must be told, when we are young, what rules to live by ... [teachers should] prepare our children to live and work comfortably with the stranger that sojourneth among them. And should it happen that one day our children themselves are strangers, let them know that a full share of the sun is rightfully theirs.

When we first instituted the rule, I worried the children would not fully understand our message. But now I am sure many of them internalized the values we shared with them in this one simple rule.

Parents reported over the years that their children were puzzled when they saw children bullying or excluding classmates at their elementary schools. They became playground ambassadors, explaining kindness and inclusion to their peers. They stood up for the children being bullied. I like to think they taught a few others along the way that, "you can't say you can't play."

I hope that educators of young children will consider this simple rule to teach their students what they know in their hearts is right. And I hope that, as these children move forward in their educations, they will carry this rule with them. In all of our communities, we need to bring those who stand alone in from the shadows. If all kids simply understood that "You Can't Say You Can't Play" at school, it would enrich everyone's life.