Linda Tabach, 52, is living proof that old dogs can be taught new tricks. She was a lifelong couch potato who would have driven down her driveway to fetch the newspaper if there was street parking available. She moved from the refrigerator to the couch, from the couch to the bedroom. Exercise was something other people did and even walking around the block required more motivation than she could muster. And somewhere along the way, she picked up 40 pounds of extra weight -- something the Maryland woman blames on a medication she took.

Fast-forward to 2012. The couch potato is now running half-marathons.

And no, she doesn't make it sound easy to get from point A to point B. Part of what is so inspiring about listening to her story and reading about her journey on her blog, LemonsLifeLove.com, is that she doesn't sugarcoat the struggle. She hated exercise, period. She tried it in various forms, repeatedly, and always failed. Nothing ever stuck, except the weight she gained. Each time she tried and failed, the failure etched deeper in her psyche, making it harder to motivate herself the next time.

She started the blog because, she says, all the health and wellness and nutrition sites she saw were geared toward younger women. "I wanted something for people my age, who were like me," she said. And being like her, well, there are an awful lot of us. Not obese, not really even overweight until we hit our 40s. Then, a slowing metabolism -- or in her case, a new medication -- simply triggers a gradual weight gain. When you open your closet, nothing fits anymore. You know you should exercise, but you can just never get started -- or you start and stop. Gym memberships, walking with friends, hiking on weekends -- you do it for awhile and then something crowds it out of your schedule. And you feel bad all over again.

"Sound familiar?" asked Tabach. "That was me, all over."

"I dabbled in exercise but never liked it -- no matter what I tried."

In her case, what motivated her was her mirror. She looked and didn't like what she saw. It wasn't the doctor telling her she had high blood pressure and high cholesterol. It wasn't the suggestion that she should go on medications for these problems. It was the mirror. "Everyone has their own tipping point," she says.

But deciding to do something about it was just the first step. Her first diet was hardly healthy. She ate processed frozen diet food -- Lean Cuisine -- and yogurt. "Yes, I lost weight," she said, "but I really didn't feel better."

She began to educate herself about nutrition, and with that, pushed away the processed foods in favor of more fruits and vegetables. In 2008, she began walking around her neighborhood and for reasons she still doesn't quite fathom, actually liked it. She's since spoken to dozens of people who took up running or walking in their 40s and 50s, and actually liked it, whereas they hated it when they tried it before.

She joined the Couch to 5k program -- and while she did it, she found it difficult. The program suggests participants will be able to run 5k races in nine weeks; "no way did I do that," said Tabach. "I did it at my own pace and never got to the 5k." Still she credits the program as worthwhile and something that got her started.

The following year, she joined a county running club, which had a training program for women who are beginners. "I don't know why, but I loved it. I met women who, myself included here, could barely run a mile. But ultimately we ran in a 5k race. And that's when I got to my goal weight."

The goal weight -- now that's a funny thing, said Tabach. Her goal weight was set by her doctor, but when she went in to see him after reaching it, he seemed surprised and asked her how she did it. "Uh, by diet and exercise," she said. The doctor admitted that he sets goal weights for many patients, but few actually reach them.

She's maintained her weight loss for the past three years and did a 10k training program and ran two 10-mile races. But life has its setbacks. In 2011, while in training for a half-marathon, a tumor was discovered in her kidney. She had cancer surgery in September of that year and went back into training just as soon as she had recovered.

In April, she completed her first half-marathon, making her goal time by 33 seconds.

Her message to anyone discouraged about their weight, health, or exercise regiment? "No matter how old you are, it is not too late to change."

How This 52-Year-Old Went From Couch Potato To Half Marathons
Linda Tabach&#039;s Reinvention 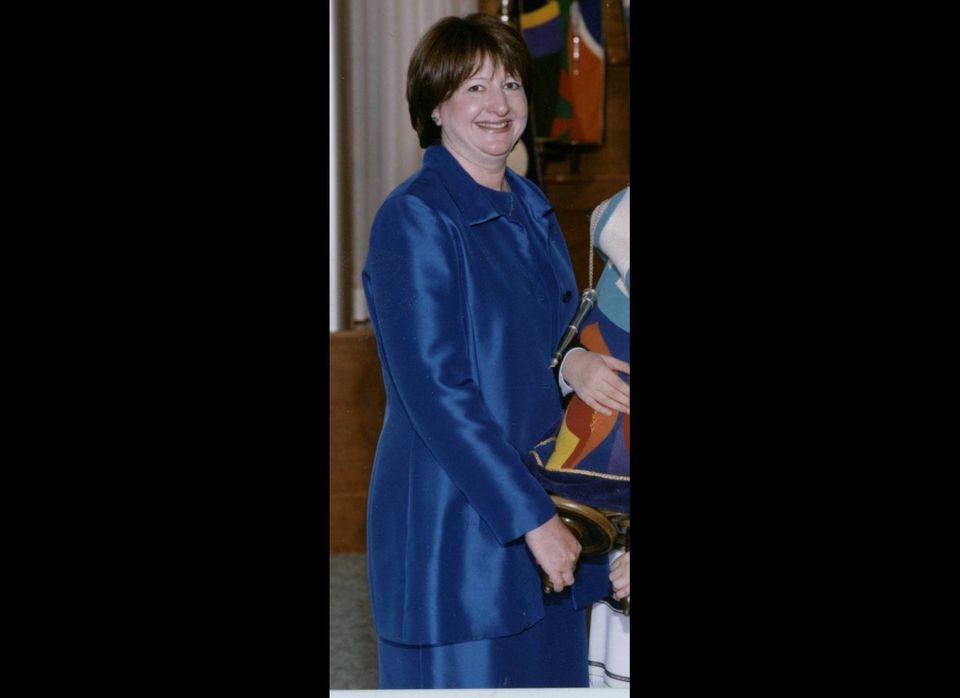