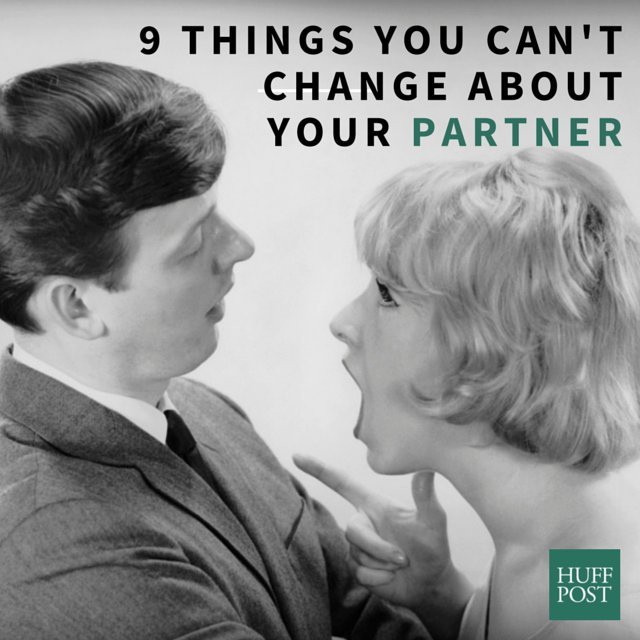 Love can move people to do things they never thought possible: Who among us ever believed they'd find someone worthy of sharing an order of fries? That's the power of love, people.

As powerful as being in a relationship can be, there are some things that even love can't change -- namely who your partner is at his or her core. Below, experts weigh in with nine things you can't change about your S.O., as hard as you may try.

1. Her relationship with her family.
You know that saying, "You don't just marry a person; you marry his or her entire family"? It's 100 percent true, said Karl Pillemer, a professor of human development at Cornell University and the author of 30 Lessons for Loving: Advice from the Wisest Americans on Love, Relationships, and Marriage

"People’s feelings about their own families are deeply ingrained, and they are not likely to alter significantly after you tie the knot," Pillemer said. "You can come to compromise, but if your spouse and your family don’t get along, pressing for change is not likely to work. Instead, I'd tell you to give your S.O. a free pass to avoid unnecessary get-togethers. Family togetherness is nice, but not at the expense of your relationship with your partner."

2. Whether he's an extrovert or an introvert.

Opposites attract, but only up to a point: Somewhere down the line, you may wish your introverted partner was a little less inclined to stay in for yet another night of Netflix -- and he very well might wish you'd reign in your social butterfly ways.

"Your partner's temperament is one thing you really can't change," said Samantha Rodman, a licensed psychologist and dating coach. "One great example is whether they are an extrovert, who relaxes by being around others, or an introvert, who relaxes by being alone. People who marry across extrovert/introvert divide will have to accept their partner's needs for social interaction, or, conversely, for time alone to recharge."

3. Her hobbies.
When work or family life gets stressful, hobbies and pastimes are what keep us going. Don't bother trying to change your S.O.'s favorite activities, said relationship coach and writer Chris Armstrong.

"For one thing, your annoyance over their shopping or World of Warcraft love is probably much ado about nothing," he said. "Individuality is important -- we lose ourselves and lose control if hobbies are lost, plus the relationship as a whole can be harmed in the process. As I've told a client, if you know that a hobby is a big part of your S.O.'s life but it's too much of a time-suck in your eyes, you two probably aren't a good fit."

4. His anger issues.
Many of us go into relationships believing we can change or fix things we don't like about our partners. If the the trait in question is your S.O.'s anger issues, holding on to that belief can be downright dangerous.

"Explosive and disproportionate anger is one of the most common reasons people offer up for their marriages going south," Pillemer said. "It's an issue that needs to be taken with the utmost seriousness: Beware of a person who has a bad temper, who seems to get angry over nothing and, in particular, a person whose anger seems out of proportion to the situation. This is one personality characteristic that is almost impossible to change."

5. Her religious beliefs.
While it's certainly not always the case, having an interfaith relationship when you're both deeply religious may prove problematic, Rodman said. Much of the time, the problems doesn't arise until much later in the relationship, when a couple decides to have kids.

"People who were raised going to religious services frequently will often want to resume this practice when they have their own children, even if they didn't attend services as a younger adult," she said. "On the flip side, if your partner is an atheist and agnostic, it's unlikely they'll become devout believers just by virtue of being with someone with faith."

6. His need for alone time.

You want to spend every waking moment with him, but he needs his space. You might read the request as hurtful, but consider the silver lining: Time apart often keeps a relationship fresh while ensuring that you both maintain your individuality, said Armstrong.

"When people are always together, they can feel as though the relationship is the only substantive thing going on in their lives," he explained. "It can cause resentment. People want companionship but they also want meaningful connections and self-reflection to both recharge and keep their relationship fresh. Attempting to change a partner's desire for alone time is a non-starter."

7. Her need to plan every last detail.
You meticulously plan every last detail of your life, from when you're taking your next vacation to when you want to have baby #1. Meanwhile, he's a take-life-as-it-comes type. The divide may be endearing at first -- you complement each other so well! -- but eventually, it might become problematic . In any case, you're not likely to change each other's way of thinking, said clinical psychologist Jill Weber.

"Usually it is not a case of polar opposites, but rather a difference in degrees," she said. "Some people are more regulated and are prepared to pay attention to the details of life while others are more likely to go with what they are feeling in the moment. The conflict plays out in a variety of ways -- rules for how the children will be raised, spending and saving or even how to spend a weekend. Marriages where people vary strongly in their tolerance for delayed gratification can deteriorate to a condition where all of the energy in the relationship is going to trying to change the other."

8. His thoughts on having kids.

If someone you're seeing tells you in a straightforward way their true feelings on having kids, trust them. Moving forward with a relationship in the hopes that they'll change their mind once you're married or otherwise committed is a very risky gamble, said Armstrong.

"It’s perfectly reasonable for someone to say, ‘I can see myself having kids with the right partner’ but this is wholly different than someone going from ‘I don’t want kids’ to ‘I want kids,'" he said. "Some people do not want children because of the financial or time commitment required. Others have no desire because they don’t want to be responsible for another human being. Are they going to change? Not likely. Should you want them to? Absolutely not."

9. Her sense of humor.
Whether or not you both crack up at Louis CK's potty jokes may seem too minor to make this list, but having a similar sense of humor is more important than you realize.

"Older people I've interviewed have told me that some future marital problems can be diagnosed based on the question: 'Do we think the same things are funny?'" Pillemer said. "Sense of humor is a strong indicator of compatibility. If you laugh at the same things, you are likely to see the world in similar ways. But there’s an even more important reason to take a careful look at your partner’s sense of humor: You will be stuck with it for many, many years. If his idea of high humor involves practical jokes and yours doesn’t, rest assured that you will not find the hand buzzer or the whoopee cushion more hilarious fifty years from now."