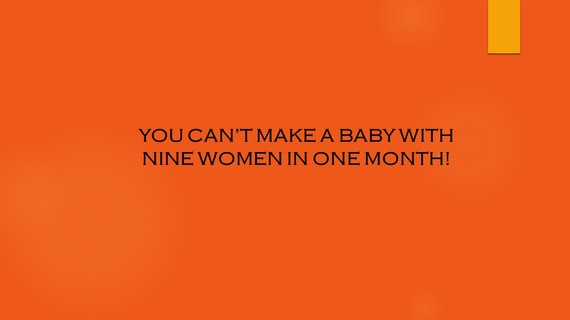 They all looked at me dumbstruck. They couldn't believe their ears. What did I just say?

I was being browbeaten into agreeing to a previously committed delivery date by applying more resources, even though the scope had been increased by 25percent, when I finally said loudly "You can't make a baby with nine women in one month." The awkward silence was broken when someone started laughing. The point was made.

If you've worked in Corporate America, you'd agree with me when I say that "hurry up and wait" was the name of the game. "Rush rush" was the name of the game, either because someone inadvertently committed to a date without checking with the actual worker bees, or cause someone wanted to look good with an aggressive timeline, or just cause people in Corporate America love to live and die on deadlines.

"Rush rush" is also the way life is lived in a "two-career" family. Rush out of the home to drop off the kids, rush back home to pick up the kids, rush home to cook, rush through work to make it to the PTA meetings, and on and on. Perhaps that's why or perhaps it's just my personality, impatient to the boot, that I've rushed through the past 30 years of my life, right here in the US of A.

Now, six years after I said adieu to Corporate America, (and 10 months after being in a vertigo of activity while producing my first Hollywood Indie feature film), I've finally learned "not to rush" through life. I don't know if it's because "with age comes wisdom," because now the kids are grown, the corporate life is behind me, and I'm simply an entrepreneur/filmmaker, but I've just stopped rushing.

I no longer rush out of bed to be somewhere (wait, actually, as a night owl, I've never rushed out of bed, lol). I spend more time deliberating what I want to work on and whom I'd like to work with, rather than take any project that comes my way. I choose to follow my intuition, rather than accept projects that I know are doomed before they begin, even if they pay a lot.

So how did I make the transition?

Well, having a spiritual advisor helped. Besides all the other stuff I learned from him, his most valuable input to me was, "learn to sit still," or in a fancier word, MEDITATE.

So I learned to meditate.

Nothing complicated, all I learned to do is sit still for a few minutes, every single day. Given my super type A, Initially it was tough to sit still even for two minutes, because I had the urge to look at the buzzing phone, or because the "list of to-do tasks" kept scrolling, through my mind. But with practice comes perfection (I'm still awaiting the perfection phase)...and now, I have learned to sit still for 10, 15, 20 minutes at a time. I no longer succumb to distractions, nor do I feel any restlessness and have actually began meditating twice a day (it's early yet, only two days into it, so I shouldn't be jumping up and down in triumph, yet).

The pressure to "do everything, today" has diminished. The satisfaction of doing "what I love," and not "what I should" has increased. The wanting to be in two places at once has subsided, and I no longer create a daily list, brimming with tasks that even after superhuman effort I couldn't 100 percent accomplish.

And most of all, there is no guilt from just "not doing anything".

That's it!! I made one simple change, I began meditating, or "giving myself, a timeout".

If you meditate or if you don't, I'd love to hear your experience.

Download
Calling all HuffPost superfans!
Sign up for membership to become a founding member and help shape HuffPost's next chapter
Join HuffPost
Follow Nipa Shah on Twitter: www.twitter.com/nipashah
Voting Made Easy
Register to vote and apply for an absentee ballot today
Register now