Girl is having problems with relationship with guy.

Girl's friends eventually start saying, "Maybe you should spend some time just trying to figure yourself out right now instead of this relationship."

I've been that friend and I've been that girl. And while I think that it can be a helpful thing to do sometimes in certain situations, I really don't think it's an absolute must-do in all situations.

A while back I was listening to a talk by one of my teachers Marianne Williamson and it was the Q&A portion of the talk. A man had come up and asked her a question about his current relationship problems. He had been with this woman for a while now and they had a kid together but he couldn't figure out how to work out the problems.

He ended sharing his story by implying that he's been thinking about leaving so he can "figure himself out."

Now, I love Marianne because she can be very blunt at times. She quickly responded, "Whoever said that you need to 'figure yourself out' before being in a relationship?!" She then elaborated on why it isn't a good idea to just leave so he can 'figure himself out'.

Here's a few realities about loving other people:

It's been a while since I've brought up this idea in an article, but I've always found that understanding this basic idea is crucial to having a happy, healthy and loving relationship.

Love isn't a feeling, because feelings are ever changing and they come and go. Rather, love is something that we choose to do. It's a mindset that we make the conscious effort to try and have every single day... that's how we can create truly loving relationships.

#2. To love someone means that you are choosing to grow together

To be in a relationship with someone means that the two of you are going to grow and evolve together. Really, its the ultimate purpose of the relationship. It's about our own soul's growth and evolution and how it evolves, grows, and learns with another.

To think that we can grow a lot while being completely on our own is pretty limited. There are always more ideas, thoughts, and experiences that we are going to learn while in relationship with another human being.

One of the discrepancies that can come up in our relationships is our own thinking of what is is that we are "not getting" from the other person versus what we are, in fact, "giving." We may be stuck in a habit of thinking things like, "Well I'm not getting as much support as I'd like," "I'm doing more of X than he is," and so on.

The problem with this kind of thinking is that it is completely focused on the other person and what they are doing rather than ourselves. Its shows a desire to want to control the other person, rather than to be accountable for ourselves and to fully stand in our own power.

I've said it before in many other articles and I'll say it again: It's all about the energy that we are bringing to our relationships that can really determine their success. Are you in this relationship full of fear -- scared of being vulnerable and fearful of rejection? Or are you going into this relationship filled with love-- peaceful, confident and with an open heart? 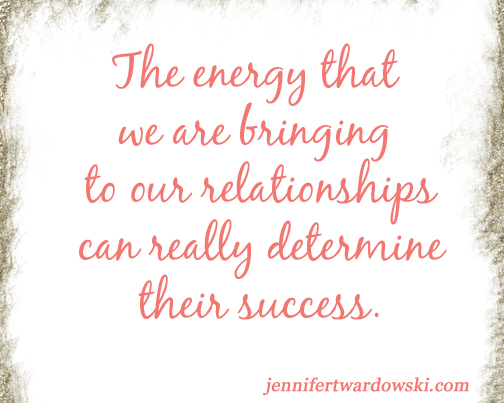 Click to Tweet: The energy that we are bringing to our relationships can really determine their success. via @jenilyn8705

There are many ways that we can shift our own energy from fear to love, but one of the ways is through meditation, which is why I've created my new meditation album Ignite Love from Within. To learn more about my new album and to receive a free meditation from the album called Healing Blocks to Love, click here.

Now -- all of this being said -- this doesn't all mean that breaking up and spending some time being single shouldn't be an option. There are of course situations where ending the relationship may be necessary. Maybe you've felt like the two of you have been growing apart or that you both have different dreams and goals in life.

If that's the case, it isn't a time to end things "for a while" to "figure yourself out". Rather, it's a just a time to just end it -- as that would be the most loving thing to do for both yourself and the other person no matter how painful it may be.

Ultimately, remember this: "Figuring yourself out" is, realistically, a lifelong journey and it is totally and completely unrealistic to think that you'd be able to do it in a few months or years. We figure ourselves out by living, by being in relationships with others, and by striving to bring love into our lives.

So take the risk and dive in to your relationships. After all, the only way we can really learn is with time, effort, and practice.