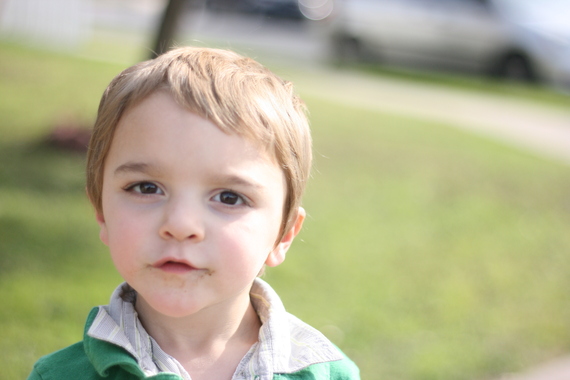 I'm not a hoarder. Not even close. In fact, I'm probably the opposite of a hoarder. I periodically like to go through a room and take all of the unnecessary things out of it and just throw them away.

But my kids? Well, they're a different story altogether.

For Easter this year, the kids were talking about all the amazing toys their friends were getting from the Easter Bunny. It seems like the Easter Bunny has turned into a second Santa in many kids' lives. Fortunately, we don't do the Easter Bunny, and Mama and Daddy are much cheaper than the Easter Bunny. So the boys got a small gift card to a local yogurt shop (which ended in a GREAT family outing, let me tell you) and another small one to Hobby Lobby.

I had high hopes for the Hobby Lobby card. We're always running out of art supplies, and I thought that's what they'd buy. But no. In we walked, and they headed straight for the Beanie Boos display (which also happens to be the "impulse buy" display) and then directly to the checkout counter.

It's not like they don't have a billion already. But they hoard stuffed animals. Every time they have money, they want to buy another one. These things are like rabbits, multiplying at every turn. I've tried to get rid of some of the old ones -- the ones that are too beat up to even recognize anymore because the 4-year-old twins went through a de-fluffing stage -- but the boys started crying like someone had died. "We can't even have a fake dog?" they said.

Well, tell me if you'd argue with that one.

"They're all loved," they say. Which is a nice sentiment. Except there's one that's been caught in a backyard tree for about three weeks, and no one's made a move to bring him back in.

Papers are my nemesis. I have three boys in school, and the number of papers they bring home is nothing compared to the number of papers they find and draw on at home. I'm sorting through about three hundred papers a day, and that's not even an exaggeration. And I have to be stealthy about when I put the papers I don't want in the recycling bin, because if boys see me? It's "I made that for you. You don't want it?" and then I'm feeling guilty for even being alive.

Anytime my 4-year-old twins go outside -- which is a lot these days, because twins are hard -- they're digging holes in the yard. They are fascinated by worms and pillbugs and lady bugs, and because it's been a beautiful spring here in Texas, there are plenty of bugs to choose from. The problem is, they steal mason jars and fill them with bugs and then stock them in the pantry, so the next time I go to reach for the raw sunflower seeds, I'm met with a prop from a horror movie. But when I want to throw them away, the twins say the jar is full of their pets.

"They're my pets," one of them will say.

While they're fighting about it, I dump the contents of the jar in the trash and still have plenty of time to relax, because it'll be about an hour before they've settled their disagreement.

It's been a while since we introduced LEGOs into our house. And I'm so glad we did. I love having to nag my 9-year-old to clean up his LEGOs every other minute, because he gets so focused on a building project he doesn't care that it's time for dinner, he just wants to keep building.

LEGOs are great. Even I enjoy building with them sometimes, when the kids aren't home to tell me how I'm doing it all wrong. The problem is, my kids are always talking about how they want more, more, more. Have you seen how many LEGO sets there are out on the market? We would need another house to collect them all, but the 9-year-old has a mission that sounds exactly like that: collect them all.

Here's a ridiculous admission for you: When I'm doing laundry, I never check the pockets. I know I should. It's really dangerous not to, but when you're separating a weeks' worth of laundry for eight people, you don't really have much time to do pocket-checking. Periodically, I'll have a load going in the washer and hear a terrible thumping noise. At first I'll think it's someone trying to break into the house, because what can I say about my imagination except that it's highly active and also doomsday-ish. And then I'll realize it's coming from the washer, so I'll think the washer is probably breaking, great, now what are we going to do, there's no way I'll be able to wash clothes the old-fashioned way for all these people.

But then I'll open the washer and see the source of all that clunking: rocks.

Don't ask me why I didn't feel the weight of those rocks when I was sorting the clothes. That's a ridiculous question.

It's not just rocks, either. It's sticks in the bathtub and leaves all over the front entryway and dirt in cups and flowers encased in bowls of water they put in the freezer for a "quick science experiment." My kids are hoarders of everything nature.

I like a simple home, but kids make it anything but simple -- not just in the emotional sense but in every other sense. It doesn't matter how many times we explain to our kids that a lower number of "things" makes us much happier, they want more. It's human nature. They have to learn themselves that things are not what will make them happy in the end. And they'll learn that eventually.

In the meantime, let's just all pretend I'm on an episode of "Hoarders" and call it a successful day.

More:
KidsParenting parents-dadsChildrenParents
Newsletter Sign Up
Raise the kind of person you'd like to know
Subscribe to our parenting newsletter.
Successfully Subscribed!
Realness delivered to your inbox