These questions are just as relevant today as they were in 1914. Tony Robbins has said that "70% of every experience a person will have will come from his/her network". I don't know if this information is factually proven, but it seems to make sense and back up the claim that "it's not what you know that counts so much, as who you know!"

For a professional entering a new industry, a recent college graduate entering the working world, or anyone that is seeking to have more relationships, building a network can be difficult. If you are a person who is seeking to meet new people, it is easy to ask yourself "what do I have to offer?" Without any knowledge, connections, and resources, it is easy to write yourself off as somebody that has nothing to offer.

What you may not realize is that you have a ton to offer in terms of your time and willingness to listen.

PEOPLE LOVE TO TALK ABOUT THEMSELVES!

By seeking to understand another person's story, you are showing them respect and empathy towards the decisions that person has made in his/her life. Essentially, by listening to another person talk about themselves, you make them feel valued because you care about what they are saying and it is deeply personal to them. No amount of money, connections, or knowledge can make a person feel as great as having someone take the time to listen to them.

Another thing you may not realize is that no matter how famous, wealthy, or powerful a person is, you are not annoying until you receive a response. Thus, be persistent as "the squeaky wheel gets the grease." This could mean sending multiple emails, phone calls, showing up at their place of work, or even writing a handwritten letter.

After you know the right people, who those people are, and have taken the time to listen to them, you can then easily transition to being understood. The key to being understood is to clearly and concisely convey what you are interested in doing. You can typically count on the 5 to 1 rule. What this means is that you have to give somebody roughly 5 times as much active listening as they will actively listen to you. So if you have taken 15 minutes to listen to somebody's story and talk about himself, he will give you roughly 3 minutes of actively listening to what you have to say. Therefore, be concise and clear about what you are interested in. 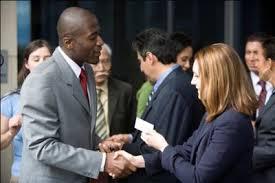 However, there is a trick to the 5 to 1 rule that can give you more active listening time. If you ask questions to the person you are connecting with on the topic of what you are interested in, you are showing that person respect. By asking questions, you are conveying that you care about what they have to say and value their response. At the same time, you are actively engaging them to think about a response to your question as opposed to just listening to you.

Ultimately, by asking the right questions and conveying your interests clearly and concisely, you are making it possible for that person to recommend other people to you. This is how a network grows.

Whether you are a professional entering a new industry, a recent college graduate entering the working world, or anyone that is seeking to have more relationships, these are some tips to getting your foot in the door. Strictly relying on your friends and family's relationships for connections is a lot of eggs to put in one basket. Also, since it takes significantly more effort to build relationships on your own vs. via friends/family, you will likely value relationships you built on your own more than those you received from friends/family.

"It's not what you know that counts so much, as who you know!" is very true today. However, there are many ways to get to know the right people. Utilizing family connections can be extremely valuable, but the ability to build relationships on your own is paramount to expanding your network.