Think you are a giver? If you do, most likely you have it all wrong. I know I did, until recently.

Giving has always meant, to me, being able to give a gift or listen to someone by giving my time and energy. But I had no idea the path I would take -- as a result of one simple idea I had -- that would fundamentally change my outlook on life.

Late last year, I decided I was going to give something away each day of 2015. I was inspired by all the giving that was taking place from the end of November through the end of the year and I didn't want it to end. There we so many stories that touched my heart, and just about every person and brand had some element of giving happening. I didn't want it to stop. I wanted to live in a world where giving wasn't attached to a time of year.

I imagined how I could give something away every day and created a project and called it #365DaysOfGiving. I invited people to be part of it by receiving an email from me each day in which I would offer to give something away. I launched it and waited to see what happened along the way.

It has been 223 days since the launch and the lessons I've learned, so far, have been many. Perhaps the biggest lesson is that it isn't about what I am giving away that people respond to but the stories I share as to why I am giving it away. Responses like this come in regularly:

This email in particularly resonated with me because I am currently gaining clarity on who I am and recently realized that I had stop waiting for others to choose me, and choose myself.

It wasn't until the last 30 days that I've realized we have giving all wrong.

Learn to receive in order to give.

Early in the year, I had about a dozen people receiving my emails. Even though I was offering something every day, many items went unclaimed. I was crushed. How could I give something away if nobody was receiving what I offered? I started to realize that the act of receiving was as much a part of the process as giving was. To give, someone must receive. The feeling you get from giving feels so good because you know there is another person who receives what you give. In other words, they are actually giving you something by receiving. You both end up being a receiver and a giver regardless of who started the process. In giving, both parties walk away receiving. And many people don't know how to receive. That's what I learned.

Taking is not receiving.

One of the main reasons people told me they didn't want to receive what I was giving away, was because the felt like they were acting like a taker and not a giver. After reading Adam Grant's book Give and Take, where he classifies people into three groups: givers, takers and matchers, I felt like you were either one or the other, a giver or a taker, not both. But then I had a conversation that made me realize, taking and receiving are two different things. When you take, you gain and someone loses. When you receive, both parties end up gaining something. it's not give and take, it's give and receive.

To give is to love.

That feeling you receive when you give something is better than getting money. It's difficult to put into words because it's an emotion and not logical or rational. I was at the Gratitude and Trust Summit in NYC this summer and heard one of the speakers talk about the Hebrew word for love, ahavah, which also means to give. This explained it! To give is to love. It's an emotion and feeling that transcends words. Here is to a world of living to give and love in receiving. 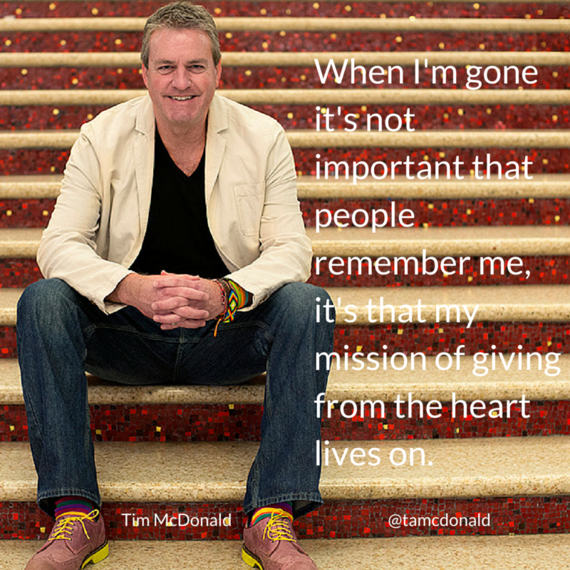 Please join me in #365DaysOfGiving by signing up to receive what I give away each day. And if you give something and recognize that you are also receiving, share the experience using the hashtag #365DaysOfGivng. To give is to love. To love is to give.