The sun is shining and you've decided to soak it all in at the local public park. Maybe you're in the mood for grilling out or for taking your dog on a walk. Or maybe, like thousands of families across Wisconsin and throughout America, you're bringing your child to the park to play on the swings and slides, just like you did as a kid.

That sounds like the perfect summer afternoon. Until you see one of these guys. 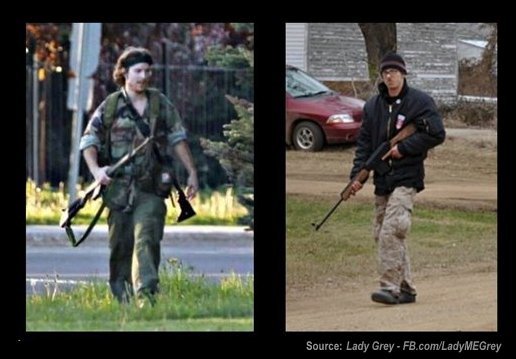 One of them is wanted for shooting and killing three police officers. The other is just parading around with a gun because he can -- because current law allows him to bring loaded, military-style assault rifles almost anywhere he wants.

How do you know who's who? The blunt truth is, you can't know. And in the time it takes you to evaluate the danger, the gunman could open fire just like we've seen recently in Santa Barbara and Las Vegas.

Across Wisconsin, and around the country, people are faced with this terrifying situation because more and more extremists, armed to the teeth, are showing up everywhere from our parks and playgrounds to coffee shops and Target stores.

But the problem gets worse. Even if these are just "good guys with guns," you're not safe, and no child playing nearby is either.

Sure, responsible gun owners believe they pose no threat. But accidents happen. Mistakes happen. And when guns are involved, accidents and mistakes can lead to tragedy.

Within the last few weeks, a man in Janesville, Wisconsin didn't realize he had dropped his gun in a softball field at a park. A child found the loaded weapon. And a woman, walking her dog at a dog park in Jefferson County, Wisconsin, was wounded when she accidentally fired her gun while tucking it back into her waistband. As more guns are allowed into more public spaces, this certainly won't be the last accident, and it won't be the worst.

Knowing that a simple mistake could be deadly, would you want your child sharing the playground with this man?

My childhood memories of summer are about family cookouts and games of catch. My parents didn't have to worry about protecting us from senseless and preventable shootings. That's how it should be.

No child should have to share the playground with grown, armed men, and no parent should have to worry and wonder if the guys with the guns are good or bad, responsible or reckless.

For Wisconsin, and for our entire country, this should be a no-brainer: Guns simply don't belong on our playgrounds and in our parks. If you agree, stand up and say so. Tell your legislators to stop pandering to gun rights extremists and start protecting our kids.