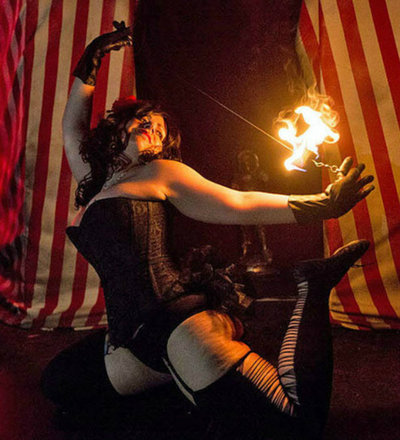 Ever think about getting stuck on death row for no reason and with no recourse? It's not a cakewalk.

Take, for instance, the case of Glenn Ford, sentenced to death in Louisiana for killing a watchmaker. Four people were suspected of the murder but Glenn was the only one to stand trial, convicted partially by the testimony of another suspect's girlfriend. Even with top legal counsel assigned to him on appeal (the guarantee to post conviction counsel is a recent development) he spent 29 years 3 months and 5 days on death row and 23 hours of each one in solitary confinement. Finally, the real killer confessed and the state let Glenn go. He passed away 15 months later.

Mr. Ford's story is one example of how the judicial system needs committed watchdogs, and here's the story of one you should know.

At the age of 21, a woman in California was studying belly dance and her life took a sharp turn when she heard about her dance instructor's second passion - fire dancing. The idea of fire dancing intrigued her, but she felt she could never do such a thing. Then she asked herself "why not?" That's how Mistress K, fire dancer extraordinaire, was born.

Shortly after her baptism by fire, she took a backpacking excursion through Europe and wound up doing some impromptu street performances during Fete de la Musique in Paris and then in various other cities across Europe while hanging out with the juggling community. After a brief stint back in the States, she found herself in Berlin on a semester abroad and wanted to extend her time there, but cash was tight. Without a valid work visa, it was back to her fire routine and soon she was asked to be the entertainment at a local bar that had a fake beach. It provided her a captive audience and it paid.

Let's skip from Germany to Los Angeles and then NYC, where she fell in with something a little different, a burlesque crowd. Great as these gigs were, there was a lot of competition among the dancers. The backstage politics took the fun out of it, and she realized that her heart was really with the circus and sideshow. Sideshow performers can have an antihero quality that keeps backstage egos and cattiness to a tolerable, muted hum. A sideshow performer simply can't get too full of himself after a long day of pounding nails into his head. The Mistress preferred that sideshow sensibility and stuck with it. She moved down South and eventually organized her own show, which she took to several cities across the US.

Carrie went to college for social work and public health, working with alcoholics and homeless people who arrived at the precipice of society and, often, arrived at the edge of their lives. That led to working for a capital defense office that represented death row inmates during the final stage of their appeals. She had three roles in each case: review all prosecutorial evidence to see what might have been omitted in a case; review all defense evidence to see if there were any acts of negligence, and personally get to know the people facing execution. It doesn't always overturn a case, even when it can be proven that the person doesn't understand their sentence, or that their defense failed to mention vital extenuating circumstances - like, they're not a flawless person but they just didn't do it.

In fact, few people are exonerated every year for being falsely convicted of a capital crime. Killing the rest, innocent or not, is expensive. Florida alone spends $24 million per execution. Police chiefs call the death penalty the least effective way to deter crime, and 61% of voters would prefer a remedy other than the death penalty for the punishment of murder.

The number of sentences dropped slightly over the last decade and the number of exonerations increased from about 3 to 5 per year since 1987.

While Carrie found the work on death row challenging and interesting, bringing her into contact with great legal minds and mental health experts, the resolutions were few if they appeared at all. The frustrations of the death penalty were, metaphorically, killing her. She's taken a break, recently informing us that she's now working with severely mentally ill offenders as they are released from prison. In her words, "You know - nice, mellow work."

At night, Mistress K continues to present the art and the illusion of danger. By day, she still practices the art of making real-life dangers an illusion. Perhaps it's time for America to stop making a carnival out of our justice system, and put the sideshow in charge: those people with antihero qualities that keep backstage egos and cattiness to a tolerable, muted hum.