That is one insanely odd, oxymoronic-seeming statement, I know, but let me explain. While I was studying abroad in Spain and working in India and China, as expected of any carefree, fun-loving college girl gallivanting across the world, I had some unbelievable memories that couldn't feel real unless I wrote them down and shared them with my friends. Instead of detailing each experience through my longwinded and boring prose that only my mom would read, I titled the emails, "You haven't lived until..." and I listed about 10 of my absurd experiences. From ice-skating on the second floor of the Eiffel Tower and singing Akon's "So Lonely" with a nine-year-old boy in Morocco who spoke zero words of English, to bathing in the conspicuously dirty yet spiritually clean Ganges river and having a little too much fun at Oktoberfest in Munich, I thought these once-in-a-lifetime experiences were worthy of the title. As I grew up, and life, well, happened, I went through some even (arguably) crazier times. Having a stroke has given me some of the most unnerving, unpredictable, unnatural, yet unforgettable moments that leave me saying that, without a doubt, you haven't lived until you've had a stroke.

You haven't lived until...

10. You've had your hair searched at airport security. I don't know if it's my brown skin, my wheelchair, or my insanely thick hair that looks as if it could definitely hold some secrets, TSA gives me such an unbelievably hard time at security, which always leaves me feeling kind of violated and kind of in disbelief. They pat down every last inch of my lady parts, my wheelchair, and, of course, my hair, all done conveniently in front of everyone!

9. You've been vegetarian on a purée foods diet. Puréed peas, puréed squash, puréed brussel sprouts, and for the main course, drum roll please, puréed white beans! During the first few months after my stroke, I had a tube connecting my stomach to the outside world, through which I bitterly and silently watched the nurses, all day, every day, pour liquefied food, medicine and water into my body. Mortifying. Humiliating. Disturbing. Every time. As you can imagine, I was over the moon when my throat muscles were finally strong enough to pass the infamous swallowing test -- a test which I had previously failed miserably three times (yes, yes, the first test I had ever failed in my entire life). But here's the kicker: for the doctors to remove my stomach tube, I had to prove to them that I could consume enough nutrition by mouth by eating 75 percent of every meal. Given the fact that each hospital meal was made to satisfy the appetite of the average adult male, combined with the fact that my completely paralyzed state ensured that I never, ever worked up an appetite, each meal was pure, unadulterated torture of the most disgusting kind. Once, I forced myself to eat an entire plate of puréed beans only to throw it all back up half a second later. Ew.

8. Someone has mistaken you for a stripper. Before I could pronounce any words, I could only make a few sounds with my mouth. To prevent any awkward misunderstandings, I relied on the failsafe method of maintaining complete and utter silence. One day in the hospital, my nurse was excitedly telling me that her girlfriends wanted to celebrate her birthday at a strip club as a joke. I, unfortunately, got a bit overzealous and broke my own rule -- I tried to speak. I exclaimed, or thought I exclaimed, "I've been to a strip club!" However, she thought I had said, "I was a stripper!" For the next 45 excruciating minutes, I tried, desperately and unsuccessfully, to clear up this humiliating misunderstanding, but my voice wasn't clear enough to communicate anything that would help the situation. Despite my unyielding efforts, by the end of our conversation, she was convinced that I used to strip on weekends to help pay for my exorbitant medical school tuition!

7. People have talked to you as if you are not a human being, but actually a cute, little, dazed and confused puppy. This, surprisingly and kind of unsurprisingly, happens a lot. When speaking to me, people love to employ the classic baby talk or the ever familiar slow, high-pitched voice as if I'm a wounded animal. We don't realize it, but these voices drip with condescension when there is an actual adult human on the receiving end. Strangers assume that since my outsides are rather messed up, my insides (my brain) must be messed up too. It used to really bother me, but now I just laugh, hysterically, which probably just serves to confirm to them their assumption that I am, in fact, cracked, but I figure it's better than bursting into tears, right?

6. You've desperately tried to recall the steps involved in something as simple as putting on your shirt, but realized trying to remember something you never once actually thought about, is pretty much impossible. Did I put my shirt on while sitting or standing? Did I put my arms in first or my head? Did I hold the shirt with my right or my left hand or both? Did I bend my elbow or raise my shoulder to get my arm in? Did I lift my arms up or bend my neck down to get the shirt over my head? I have no idea what the answer is to any of these questions, so it makes the whole process of relearning these seemingly natural activities really frustrating and nearly impossible. There are so many questions to consider with an activity that is this simple; imagine how many complicated questions arise with an activity more complex, such as walking.

5. People touch your butt every day, and you don't even think twice about it. My therapists and trainers, male and female, are burdened with the sometimes awkward responsibility of trying to help me strengthen my gluteal muscles, which are surprisingly necessary for many functional activities. This inevitably leads to a lot of seemingly inappropriate touching, feeling and borderline groping (kidding!) that is actually only helping. One day, my best friend accompanied me to therapy, and watched, completely mystified, as my therapist helped me practice standing up with his hands underneath my glutes. Afterwards, she whispered to me, "I usually make a guy buy me dinner before I let him do that!"

4. The guy that you were dating for two-and-a-half years sends his mother to come break up with you for him. Unnerving, unpredictable, unnatural, yet definitely unforgettable! ;)

3. You've craved alcohol to actually help you walk BETTER. I have crippling (literally) levels of stage fright whenever I attempt to walk (among other things) in public, causing my muscles to physically lock up and stubbornly refuse to activate properly. Though alcohol is traditionally supposed to make your walking worse, by affecting your cerebellum which controls the coordination of movement patterns, I have a feeling that a simple shot of Goose might magically make my walking smoother, and may even add a little swagger in my step.

2. You've unwillingly developed a habit of bursting into tears as a response to anything and everything. While these sporadic episodes of exaggerated emotion can be insanely frustrating and downright embarrassing, most people don't realize it is actually a neurological disorder. I have Pseudobulbar affect, or my favorite name for it, emotional incontinence, which is an absolutely annoying side effect of my stroke, but surprisingly, the least of my problems! Whether I'm touched, frustrated, angry, overwhelmed, upset, or even the slightest bit sad, I have one emotional response: sobbing.

Stranger: You're truly our hero!
Me: Bursts into tears.

Friend: I'll miss you.
Me: Bursts into tears.

Acquaintance: I'll miss you.
Me: Bursts into tears.

Ross to Rachel: I love you.
Me: Bursts into tears.

Dumbledore: After all this time?!
Snape: Always.
Me: Bursts into tears.

On the other side of all this, I laugh just as easily as I cry, so I pretty much laugh at every joke, even if it is not really funny. Basically, my stroke is good for YOUR self-esteem. #yourewelcome 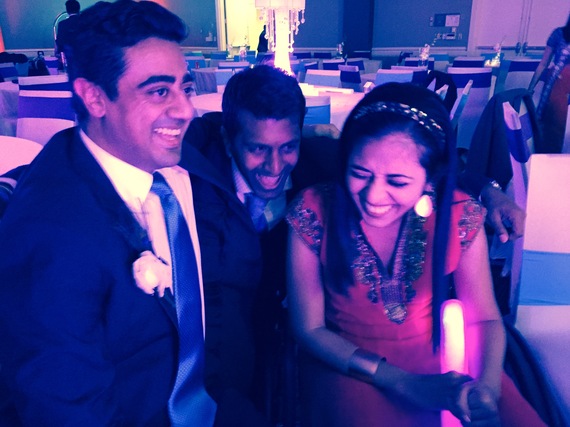 1. You've become your own best friend. Though me, myself, and I are total besties, my parents, my brother and my dog come in at a close second. For so long, I was trapped alone inside my own head. But I could hear something else -- something loud, something dying to get out, something dying to be heard. It was the fear building up inside me, screaming with pain. But there was no escape, no exit, and no way out. I had to learn pretty quickly that those fears, thoughts, and questions that were haunting my every second, were locked forever inside me. I was hopelessly trapped inside myself. Instead of letting my mind self-destruct, I embraced it. What I mean is that, I somehow embraced being locked inside myself. I became best friends with myself. I went dancing with my thoughts, singing with my fears, and playing with the answers to my own questions. I learned an irreplaceable lesson during those first few months: you can always find security, comfort and peace deep within the recesses of your own mad mind.