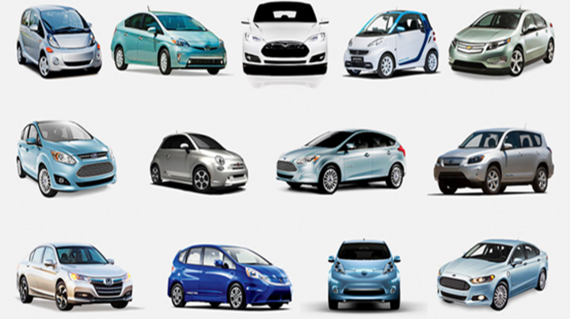 Photo Above: A sampling of the electric vehicles available on the market today. Photo Credit: Sierra Club.

Electric vehicles (EVs) are on the rise. In some locations, it's no longer surprising to see LEAFs, Volts or any of the multitude of available plug-in models driving alongside us on the road. Not even the climate-change-denying, fossil-fuel-baron Koch brothers, who run Koch Industries, have been able to ignore the reality of EVs' growing popularity. According to journalist Peter Stone, the Kochs have quietly launched a multimillion dollar plan aimed at slowing EVs down.

This week a newly released analysis by Bloomberg New Energy and Finance predicted that electric vehicles will help mark the end of the world's reliance on oil for transportation. This would be very bad for business for the Koch brothers and their allies. While EVs still make up a small portion of total US and worldwide auto sales, the projections are for rapid growth in the market share, especially once longer range, lower cost EVs hit the market in the coming months and years.

The Kochs' new anti-EV front group will promote petroleum-based transportation fuels and attack government subsidies for EVs, such as consumer rebates. This new advocacy effort, reportedly preparing to launch as soon as this spring or summer, may well spend upwards of $10 million per year. The Koch brothers' behavior hardly comes as a surprise when we consider their record, as described in this great Rolling Stone article, launching initiatives against wind and solar power, supporting any fossil fuel project they could get their hands on, practically buying the elections of anti-environmental politicians, and funding media efforts to deny the reality of climate disruption.

This planned assault on EVs from the Koch brothers comes after a number of EV victories in recent months. In December 2015, while electric vehicles were up against the lowest gas prices since 2009, U.S. sales set a record-breaking total of 13,650 electric vehicles sold throughout the month,the highest since EVs hit the mass market in 2010, and the fourth quarter of 2015 was the best-selling EV quarter to date in the US. To date, worldwide, more than 1 million EVs have been sold.

EVs have a long way to go to reach mass market adoption, but the future of electric vehicles is clearly headed in the right direction. In fact, as Bloomberg's Sooner Than You Think series indicated, EV battery prices came down 35 percent last year and will drop much further to make EVs cheaper to manufacture. In the meantime, we do indeed need government programs to make EVs less expensive and more convenient for the masses.

Many groups are gearing up to face off with Koch-funded front groups. But as the Union of Concerned Scientists recently pointed out, the planned Koch anti-EV campaign may in fact bring more attention toward electric vehicles and their many benefits. Because EVs are cleaner and more fun to drive than gas guzzlers, we'll welcome opportunities to get "butts in seats" so people can check EVs out for themselves.