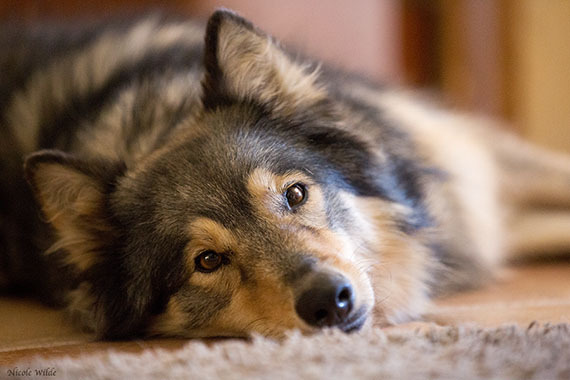 Tuesday afternoon, after being gone most of the day, I returned home to find Sierra looking strange. She had been acting perfectly normal when I left her in the morning, but now she just stood there, hindquarters trembling, eyes slightly squinty, just looking wrong somehow. It crossed my mind that it had been raining and perhaps there had been thunder, which frightens her. I called her to me but she stood there staring. I realize many pet parents would, at this point, elect to keep a careful eye on their dog or try to make them comfortable and hope the weirdness would pass. But, as my husband always says, Sierra and I have an almost telepathic bond, and I just knew something was wrong. I put Bodhi outside with his dinner, got Sierra into the car, and headed to the vet's office.

The vet did blood work and took x-rays. Her explanation of what she suspected amounted to congestive heart failure, although she didn't use those words. She recommended a cardiologist who was about an hour away, and after calling him for us, said if I could get there within the next 90 minutes he could see Sierra. Fortunately, the L.A. traffic gods were with me. Between that and my utter panic, we made it in under 45 minutes. One echocardiogram, more blood work, and a few x-rays later, the cardiologist had ruled out a heart issue. Great. But Sierra had a fever of over 105 and she was septic. (My mother, who is critically ill, had gone into septic shock the same day. What are the chances?) They suggested putting her on antibiotics and keeping her overnight, hoping the antibiotics would clear up whatever was wrong. They didn't. The next day her fever was still dangerously high. My husband and I drove to the clinic, where they explained that an ultrasound had showed abnormal fluid around Sierra's stomach. That and other factors led them to suggest exploratory surgery. We were shocked, but I immediately agreed. Again, I knew something was seriously wrong, and I didn't want to waste a minute trying different antibiotics and hoping one would help.

Two very long hours later, I called the vet. They had just finished surgery, and Sierra had come through it. They had discovered an abscessed mass on her liver that had ruptured and spread infection through her body. They were able to remove the mass and stabilize her, but there were a few other smaller masses on her liver that were worrisome. Removing them all would have meant taking most of her liver, so only the large one was excised. According to the vet, the other masses were on the smaller, benign looking side, but there is of course no way of knowing without a biopsy. So now we wait 3-5 days for results.

I'm not someone who shares much of my personal life on Facebook, in blog posts, or elsewhere publicly. But I share this to say that if I hadn't rushed Sierra to the vet and she hadn't had that surgery, things might have been dire. No matter what anyone says, regardless of those voices of reason telling you to wait and see, not to be a panicky, overprotective dog parent, that everything will be fine, listen to your intuition. I'm not suggesting you rush your dog to the vet any time she looks a little strange. But no one knows your dog better than you, and acting on that intuition just might save your dog's life.