I'm a write-from-home-mom, but have not always been. My writing has morphed from a hobby into a potential second career over the last few months. A lawyer by training, my mind was turned to mush from several years of being at home with two babies. As I emerge from the fog of the preschool years, here's how I realized that I am truly, officially, a 'writer.'

The people at Starbucks from 9AM to 11AM on Tuesdays and Thursdays politely ask about my writing. I mistake this friendly banter for positive feedback and encouragement. When they don't ask about it, I think that they hated my last article, even though I know that they don't know my name or read my material.

My husband asks if me if I really need to write a novel? Wouldn't I rather buy a new pair of shoes instead. Luckily, although I love me some shoes like the rest of you, shopping for them in a crowded mall doesn't do it for me.

I know all the editors of the relative sections of the Washington Post, the New York Times, and the Huffington Post by full name and email address. I also know their kids' and spouses' names, their street addresses, and favorite colors. JK, I'm not a stalker, just ambitious. 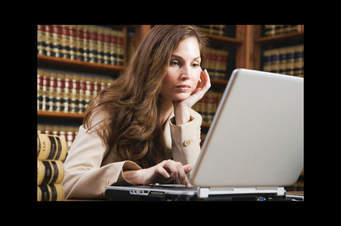 Time spent on social media is now officially work. Up until six months ago, I never tweeted. Now, I'm a for-real addict. I'm on my phone all day - worse than those Millennials. All reading, updating, posting, commenting, and tweeting is time spent learning my audience, researching, and marketing myself. If you want to reach me, put it in my newsfeed.

I allowed my husband to go a men-only ski trip with a bunch of middle-aged neighbors as long as he promised to tell me everything in an effort to gather material. He broke his collarbone on the slopes, rendering him one-armed for six weeks, and gave me only the tiniest morsels of gossip. Boy, did that plan backfire on me.

My hairdresser is no longer just a causal friend, but my best source for dating stories. I pathetically hang on every single word as she describes the latest dating trends and male behavior.

I finally learned the difference between elusive v. illusive and eminent v. imminent.

I test out material on unsuspecting friends and family.

My friends ask me on nights out if I'm going to write about it. (My friends stop asking me out).

I misconstrue social interactions as research for a future novel. Friendly conversation turns into a full exposé interview. I start interviewing people á la Howard Stern style to dig deeper. To get to the real story.

I spend an immense amount of time listening to my inner dialogue. I have difficulty distinguishing real conversations from the ones I'm having in my head, particularly when alcohol is involved.

The phrases "death of the family dinner" and "the load of laundry that almost ruined my marriage" written back-to-back in my writing notebook resulted in a 600 to 800-word piece on Spring Break with the kids.

I'm writing about writing. I never used to find that topic interesting a few years ago. Writers sure love to write about writing. We find it sooo intellectual.

My husband asks again if I'm working tonight. He bribes me with a shopping trip to buy the new pair of shoes together including promise to organize the babysitter, sex, date night, and the real kicker: a sleep-in on Saturday morning while he feeds the kids breakfast. I actually looked up momentarily from my keyboard at that one.

I ignore him to keep writing.

Women Having It All Parenting Careers Writing