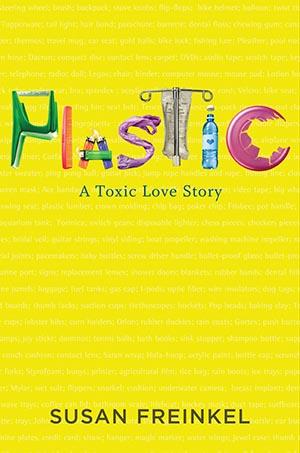 Move over, cotton; turns out that plastic is really The Fabric of Our Lives®. Does the pervasiveness of plastics in our culture get under your skin? If so, read Susan Freinkel's just-published Plastic: A Toxic Love Story. You'll realize that it's probably also in your skin, in the form of phthalates, BPA, and other possible endocrine disrupters that leach out of plastic products and into our bodies.

Oh, and it's on your skin, too, if you're wearing nylon, polar fleece, pleather, or any of those trademarked textiles owned by Tea Party funders Charles and David Koch: Spandex, Dacron, Thermolite, Cordura, Tactel, CoolMax. It's enough to make a progressive sweat.

In fact, plastic permeates our lives to an astonishing degree for a product that's barely a century old, as Freinkel's thoughtful, even-handed analysis reveals. You may despise this diabolically durable man-made material, as many of us do; the word "plastic" has become shorthand for anything artificial, cheap, shoddy, disposable. But could you really live without it?

Though plastic litters our landscapes, clogs our waterways, chokes our wildlife, and messes with our metabolism, it also forms the foundation of our convenience-obsessed consumer culture. Plastics are "the lubricant of globalization," in the words of Charles Moore, the sailor who stumbled upon the Great Pacific Garbage Patch back in 1997.

As Freinkel's subtitle suggests, our relationship to plastic, in its seemingly infinite incarnations, is far more complex than we care to admit. Her book doesn't exactly demonize plastic, even though she documents its many downsides. What makes Plastic: A Toxic Love Story such a compelling -- and troubling -- read, is her honest assessment of plastic's finer attributes, which largely get ignored in the debates over those much-despised flimsy shopping bags and single-use water bottles.

How we went from infatuation to contempt in just a generation or two is a fascinating saga that Freinkel traces through the evolution of such common items as combs, disposable lighters, chairs, credit cards, and the Frisbee. Early plastics like Bakelite and celluloid were used in the twenties and thirties to make jewelry, combs, toys, telephones, and various other items. But it was World War II that catapulted plastic to its current dominance. After the bombing of Pearl Harbor, Freinkel explains, America's military enlisted the plastics industry to create alternatives to brass, aluminum, and other strategic metals:

Many of the major plastics we know today--polyethylene, nylon, acrylic, Styrofoam--got their first marching orders during the war. And having ramped up production to meet military needs, industry inevitably had to turn its synthetic swords into plastic plowshares...That's when plastics truly began infiltrating every pore of daily life, quietly entering our homes, our cars, our clothes, our playthings, our workplaces, even our bodies.

As Michael Pollan, Vandana Shiva and other advocates for sustainable agriculture have noted, it was World War II's leftover chemicals that gave rise to industrial agriculture, providing an outlet for all that excess nitrogen. So, perhaps it's no surprise that our military industrial complex was also behind the move to make everything out of plastic. What a sad case of synergy, paving the way for an abundance of crappy processed foods and a commensurate explosion of crappy plastic containers in which to package them.

The evolution of the Frisbee, as Freinkel tells it, perfectly captures the conundrum of plastic. The original Frisbie was a pie tin that folks started tossing around for fun in the thirties. But it wasn't till a World War II fighter pilot from Southern California figured out that a disc made from plastic would be more aerodynamic that the modern Frisbee was born.

For decades, the Frisbee was manufactured in Los Angeles, but like so many iconic American products, it's now manufactured in China. In one of the book's more poignant passages, Freinkel travels to a Chinese Frisbee factory and interviews Huang Min Long, one of the women who works there.

Like most of the factory workers, she's a migrant from a region hundreds of miles away. Huang left behind two children whom she sees once a year when she goes home for the spring-festival holidays.

Huang lives in a company dormitory, sharing a cramped room with up to nine other women. The cost of her housing and meals is deducted from her meager wages. She works long hours packing up the colorful plastic discs whose purpose mystifies her--the Frisbee has yet to catch on in Hong Kong.

Freinkel asked her translator to ask Huang what she thought people did with Frisbees:

"She knows it's used at the beach."

"Has she ever played with a Frisbee?" I asked.

"No," Matthew translated. "She's never been to a beach."

Plastic: A Toxic Love Story forces you to reexamine the role of plastics in our lives. I became conscious of the fact that I couldn't read Freinkel's book without the help of the polycarbonate lenses in my eyeglasses, which I surely wouldn't want to give up. But I'll never be able to look at a Frisbee again without wondering if it was produced by a melancholy, overworked Chinese migrant who's missing her kids and wondering what the hell it is that Westerners do with these strange slabs of polyethylene.

Freinkel also challenges some of our most cherished misconceptions about plastic, such as the notion that a paper bag is more eco-friendly than a plastic one (it's really not), or that recycling our plastic bottles and other badges of our addiction to convenience somehow represents a real solution (it doesn't), or that biodegradable plastics would represent genuine progress (they might not.)

She calls on us to be more mindful consumers, but she notes that:

...individual actions alone are unlikely to bring about change on the scale that is now required -- whether the task is stopping the plasticization of our oceans, protecting our children from endocrine disrupters, or curbing the carbon emissions that fuel global warming. The forces that shaped our marriage with plastics -- a powerful petrochemical industry, a culture of acquisition, an erosion of community-mindedness in the suburban diaspora, evolved in a political culture that assumed a world without biological limits. That genie can't be put back in the bottle, but we can remold our political culture to make the genie a better citizen.

Plastic: A Toxic Love Story left me with the feeling that plastic truly is a Pandora's Box -- made, presumably, out of Bakelite. We thought we could mold plastic to be anything we wanted it to be. But plastic ended up reshaping us, instead, and often not for the better.