You, Me and the Apocalypse puts the fun back into depressive television.

NBC's 10-part miniseries, which launches at 8 p.m. Thursday after airing last fall in the U.K., follows a bizarre bunch of people through what are billed as the last 34 days of civilization on the planet Earth. 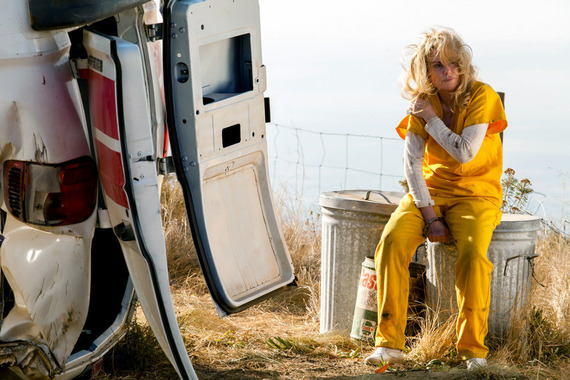 Seems a comet is headed our way, traveling at 27 miles per second, and when it lands, it will trigger a series of earthquakes, tsunamis and toxic dust clouds that will wipe out every living organism larger than a microbe.

It's an ELE, meaning Extinction Level Event. It's worse than accidentally texting that unfortunate party picture to your mother.

It also presents a tough challenge for a TV show in an era when many of the best shows have already probed the most troubling, nightmarish things we can imagine.

So You, Me and the Apocalypse goes in another direction. While its premise couldn't be darker, its approach is often bemused and occasionally absurdist.

It skips between comedy and drama, refusing to be pinned down or take itself too seriously. In that sense, it's a good-natured, welcome poke at television's contemporary crop of ultra-somber ruminations.

Equally important, it quickly delivers a fistful of characters who are sharply defined and about whom we care.

Rob Lowe leads that pack as Father Jude Sutton, a Vatican priest who is fond of saying things like "Christ on a Bicycle!" and explaining he sees nothing wrong with that because if Christ were here today, He probably would ride a bicycle. 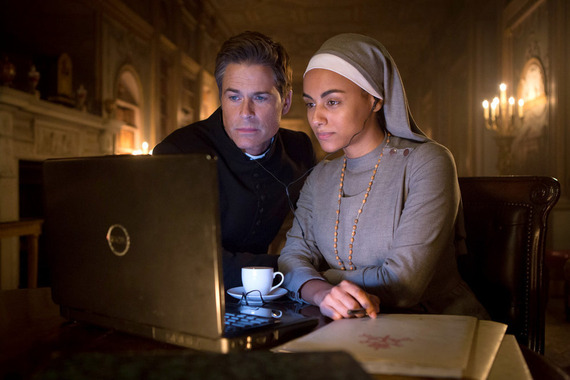 Father Jude is paired (above) with Sister Celine Leonti (Gaia Scodellaro), a restless nun he hires to help him verify miracles, vet potential saints and determine whether Jesus Himself will drop in for the End of Days.

Sister Celine has a sharp tongue, too. Relatively few nuns would call their priest a "douche bag." From their first encounter, when Father Jude hires her, we want to see more of them.

Elsewhere, we have Jenna Fischer as Rhonda McNeil, a librarian who's thrown into a maximum security prison because her 14-year-old son Spike hacked into the NSA and she's taking the fall.

The people she meets there include Leann Parkins (Megan Mullally), who seems to be a white supremacist, but says she wears a swastika on her forehead only because it helps in prison for everyone else to think you're crazy, not because she thinks it's a good look. 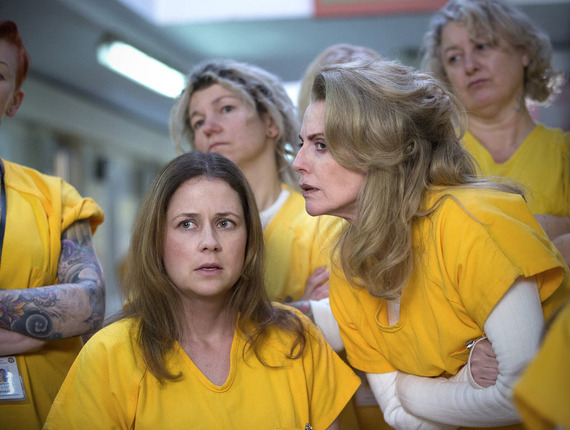 When the president breaks the news about the comet on TV, the prisoners overpower the guards and escape, at which point Rhonda and Leann (above) get scooped up by Ariel Conroy (Matthew Baynton).

He's the leader of a cyber-terrorism group and he thinks that since Rhonda obviously hacks at a high level, he can mine her skills to further his work over the next 34 days.

Baynton also plays Jamie Winton, Ariel's twin brother. Jamie is a mild-mannered British bank manager who pines for his wife Layla, who disappeared seven years ago on their honeymoon. He never knew he had a twin until he's arrested for one of Ariel's crimes.

While that's not the whole lineup, it should suggest this bunch has potential. And yes, as they all somehow tumble together, the show faces the formidable task of developing that potential while also grounding the drama in a plausible official response to the impending extinction.

It starts off well in that area, taking us to a cabinet meeting at which the President is persuaded to announce Operation Saviour.

No one really knows what that means, except he promises to bring together the greatest minds of every nation on Earth, friend or foe, to see if there's any way to persuade this comet to crash into something else.

As a leadership strategy, that feels like exactly what a real-life president would do. It also drops in a nicely subtle reminder that some universal goals should transcend narrow self-interested agendas.

But You, Me and the Apocalypse doesn't touch on politics any more than it touches on, say, the media, as a backdrop and often as fodder for gags.

The humor can dip into the absurd, like when the prisoners are pouring out of the prison compound and a loudspeaker is solemnly telling them it hopes they have enjoyed their stay.

More often the jokes are smaller and crisper, like when Ariel tells Rhonda that their meeting reminds him of the day John Lennon met Paul McCartney.

You young folks out there, Google it.

You, Me and the Apocalypse takes enough chances that some of its bits won't work, and nothing is going to make the title feel less clunky. But it's fast-paced, well-acted and the most fun you're apt to have all year with the end of the world.

Entertainment You Rob Lowe End of the World