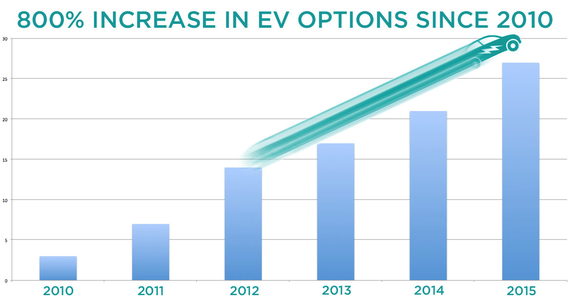 Some things in this world happen slowly: water boiling, finding the bathroom at a concert, Mondays. But one thing that doesn't is innovation in the electric car industry; this happens fast. Much like the acceleration of the Tesla Model S P85D, which can go from 0 to 60 in a little over three seconds, it sometimes seems as if the pace of new electric vehicles (EVs) coming on the market -- including affordable models -- is moving at blistering speeds. Meanwhile, state governments and utility companies across the country are continuously offering new incentives for people to make the switch to electric.

Electric cars have come a long way since we started the Sierra Club EV Initiative back in 2011. Back then, the Nissan LEAF was just starting its nationwide rollout, and electric cars were only just beginning to get their revenge. Things have changed quite a bit in the last several months.

That's why we're excited to say that we've recently updated our online EV Guide to provide you with up-to-date information for all the plug-in car choices out there. By using our zip code tool, you can also see an updated list of incentives in your state and an estimate of how much carbon pollution you'd prevent with each model -- compared to a popular conventional car.

In less than five years' time, the earlier dilemma of having to choose among a Chevy Volt, Nissan Leaf or Tesla Roadster has been replaced with the much harder (but much better!) problem of having to decide from a list of over 20 models, including attractive options from Ford, BMW, Kia, Mercedes-Benz, Porsche, Volkswagen and more.

Car manufacturers aren't the only ones putting the pedal to the metal. State governments and utilities have ramped up incentives too.

Since May of this year alone, California announced a new program to help low-income residents go electric and a new initiative that offers small business owners and landlords rebates of up to 15 percent for installing electric vehicle charging stations; Connecticut began providing an immediate rebate at the dealership of up to $3,500 when you purchase or lease an electric car; Tennessee surprised quite a few people and initiated its own EV rebate program; and the Minnesota Public Utilities Commission ruled that most of the state's utilities have to offer reduced off-peak rates for customers charging their plug-in cars, which could shave 40 percent off EV fueling costs --already much cheaper than gasoline prices.

Moreover, electricity providers like Great River Electric of Minnesota have begun to offer programs that guarantee customers 100 percent wind power to charge their EVs for no additional cost, and Green Mountain Power of Vermont had a ribbon-cutting ceremony for its first in a network of high-speed EV chargers that will cover the state.

Nationwide, EVs are cleaner than conventional vehicles -- even when considering the emissions from the electricity sources used to charge the vehicles -- but just how much cleaner does vary from region to region. For example, you'll find on our EV Guide by clicking on a Nissan Leaf that it's 53 percent lower in greenhouse gas emissions than a Toyota Camry in Miami and 70 percent lower in GHG emissions in San Francisco. For both, you'll be saving on average $802 a year in fueling costs. Our EV guide will show you how your region stacks up. Of course charging EVs with solar power is the cleanest way to go.

We've also updated our popular Pick-A-Plug-In quiz, which allows people to see which electric cars would best fit their lifestyles by answering a few simple questions such as "How many miles do you drive in a typical day?" and "What's your maximum budget for a vehicle?"

So while you're waiting for that pot of water to boil, have some fun and check out the updated online Sierra Club EV Guide or take the Pick-A-Plug-In quiz.