Everyone now knows that managers and leaders need to coach their people.

The leadership press has endless articles about it. Assorted gurus suggest that coaching is an essential leadership behavior. The number of executive coaches seems to be multiplying according to Moore's Law. Even Dilbert mocks coaching -- and there's no surer sign of mainstream success than that.

Daniel Goleman, the psychologist and journalist who popularized the concept of emotional intelligence, put a stake in the ground more than fifteen years ago in his Harvard Business Review article "Leadership That Gets Results." He suggested that there are six essential leadership styles. Coaching was one of them and it was shown to have a "markedly positive" impact on performance, climate (culture) and the bottom line. At the same time, it was the least-used leadership style. Why? Goleman wrote, "Many leaders told us they don't have the time in this high-pressure economy for the slow and tedious work of teaching people and helping them grow."

And remember, this was in the halcyon days of 2000, when email was still a blessing, not a curse, globalization was just warming up, and we hadn't yet sold our souls to our smartphones. My experience these days, working with busy managers around the world, tells me that things have, if anything, got worse rather than better. We're all stretched more thinly than ever. And while "coaching" is now a more commonly used term, the actual practice of coaching still doesn't seem to be occurring that often. And when it does, it doesn't seem to work.

The odds are you've already come across coaching in some form. Research in 2006 from leadership development firm Blessing White suggested that 73 percent of managers had some form of coaching training. So far so good. However, it seems it wasn't very good coaching training. Only 23 percent of people being coached -- yes, fewer than one in four -- thought that the coaching had a significant impact on their performance or job satisfaction. Ten percent even suggested that the coaching they were getting was having a negative effect. (Can you imagine what it would be like going into those meetings? "I look forward to being more confused and less motivated after my coaching session with you.")

So, in summary: You're probably not getting very effective coaching; and you're probably not delivering very effective coaching. My guess is that there are at least three reasons why your first go at developing a coaching habit didn't stick. The first reason is that the coaching training you got was probably overly theoretical, too complicated, a little boring and divorced from the reality of your busy work life. One of those training sessions, perhaps, where you caught up on your email backlog. Even if the training was engaging -- here's reason number two -- you likely didn't spend much time figuring out how to translate the new insights into action so you'd do things differently. When you got back to the office, the status quo flexed its impressive muscles, got you in a headlock and soon had you doing things exactly the way you'd done them before.

The third reason is that the seemingly simple behavior change of giving a little less advice and asking a few more questions is surprisingly difficult. You've spent years delivering advice and getting promoted and praised for it. You're seen to be "adding value" and you've the added bonus of staying in control of the situation. On the other hand, when you're asking questions, you might feel less certain about whether you're being useful, the conversation can feel slower and you might feel like you've somewhat lost control of the conversation (and indeed you have. That's called "empowering"). Put like that, it doesn't sound like that good an offer.

But It's Not that Hard. Really.

At my company, Box of Crayons, we've trained more than ten thousand busy managers like you in practical coaching skills. Over the years, we've come to hold these truths to be self-evident:
• Coaching is simple. In fact, The Coaching Habit's Seven Essential Questions give you most of what you need.
• You can coach someone in ten minutes or less. And in today's busy world, you have to be able to coach in ten minutes or less.
• Coaching should be a daily, informal act, not an occasional, formal "It's Coaching Time!" event.
• You can build a coaching habit, but only if you understand and use the proven mechanics of building and embedding new habits. 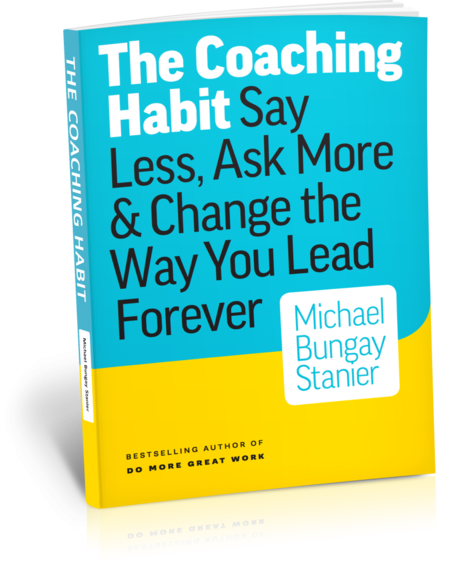 But why bother to change things up? Why would you want to build a coaching habit?

The essence of coaching lies in helping others and unlocking their potential. But I'm sure you're already committed to being helpful, and that hasn't led to your coaching more often. So let's look at why coaching others helps you. It lets you work less hard and have more impact. When you build a coaching habit, you can more easily break out of three vicious circles that plague our workplaces: creating overdependence, getting overwhelmed and becoming disconnected.

The New Habit Formula, Seven Essential Questions and Masterclass Exercises of The Coaching Habit: Say Less, Ask More & Change the Way You Lead Forever will help to break you out of these vicious circles and elevate the way you work. The questions work not only with your direct reports but also with customers, suppliers, colleagues, bosses and even (occasionally, and obviously with no guarantees offered) spouses and teenage children. These questions have the potential to transform your weekly check-in one-to-ones, your team meetings, your sales meetings and (particularly important) those non-meeting moments when you just bump into someone between scheduled events.