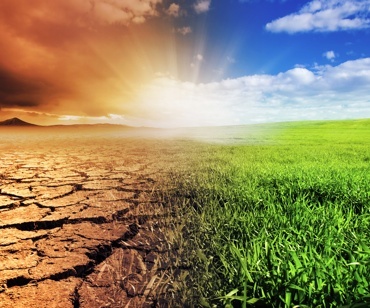 The climate change debate seems to buzz across the airwaves whether the country is gripped by a polar vortex or unseasonably hot temps, and it's not always easy to distinguish between political rhetoric and weather patterns. Here's some background info to get you up-to-speed.

Where do we start?

Most of the recent conversations about climate change relate to three new reports: One by the United States Federal Advisory Committee and a team of 300 experts, and the others by two teams of researchers, both recently released in Science and Geophysical Research Letters. All three reports provide unsettling and stark realities of where the earth stands on its battle against climate change.

What do the reports say?

Basically, climate change is here, and most likely here to stay. The Federal report outlined the role of climate change on human health, water, energy, transportation, agriculture, forests, and ecosystems. "Observations unequivocally show that climate is changing and that the warming of the past 50 years is primarily due to human-induced emissions of heat-trapping gases," the report states. Experts blame burning coal, oil, and gas, forest clearing and some agricultural practices for the unstable environment.

The other reports both focus on Antarctica, and reveal that a large section of the ice sheet is falling apart. Yes, falling apart. Oh, and we can't stop it.

Imagine the West Antarctic ice sheet as a bowl, with the bottom of the bowl sitting in the ocean. Warm water is making the rim of the bowl melt, allowing the ice sheet to melt much faster than before. Warm water, which occurs naturally in the depths of the ocean, is being pulled to the surface by strong winds. This is melting the ice sheet from below. Scientists think that the collapse of the ozone layer above Antarctica -- caused by human-caused release of ozone-destroying gases -- may be to blame.

This ice sheet consists of six glaciers. Estimates are that sea level will rise by 4 to 13 feet in the next 200 to 1,000 years.

OK, so that's several hundred years from now. What is the effect today?

Climate change is showing itself in many ways: more flooding, forest fires, longer and hotter summers. In fact, 2012 was the hottest year on record in the continental United States. Droughts are expected to intensify.

The rising sea level is resulting in heavy storms, which in turn cause land erosion, storm surge damage and flooding. Floods cause lower water quality due to sediment and contaminants. Also, nearly five million Americans are located in areas that are less than four feet above the local high-tide level.

Earth is a carefully balanced ecosystem that supports wildlife and ocean life, provides clean drinking water and fertile soil. Altering this ecosystem will have unknown results on our water supply, quality of soil for growing crops, how our plants and animals will continue to survive.

How does this affect agriculture and what ends up in my kitchen?

Climate change may have significant impact on the food system. Crops and livestock will face new weeds, diseases, and insect pests, as the weather changes. Extreme heat and rains will also play an important role in the changing landscape of agriculture, as we are seeing with the drought in California, source of half of the country's produce. In 2011, a drought in Texas and Oklahoma caused more than $10 billion in direct losses to agriculture.

Unpredictable yield of the United States' nearly $330 billion per year in agricultural commodities will, of course, challenge our food security with fluctuating crop prices.

And lets not forget about the fishes. Higher levels of CO2 in the air are increasing ocean acidity. In fact, "ocean surface waters have become 30 percent more acidic over the last 250 years as they have absorbed large amounts of carbon dioxide from the atmosphere," notes the National Climate Assessment report. This makes the ocean a less friendly place for animals with shells or skeletons (i.e., crabs, oysters, clams). Plus, coral reefs are suffering from environmental changes, putting the ecosystem for many sea creatures out of whack.

Of course, there will be some benefits. For some farmers, warmer weather will result in a longer growing season. So at least there's a win in here for someone!

Does everyone agree with these assessments?

Not even close! A recent survey of 1,300 farmers found that many farmers aren't so sure about climate change and don't believe their farms will be affected.

In fact, not all politicians agree with the Assessment. Senator Marco Rubio of Florida plainly stated his doubts about climate change to the press: "I do not believe that human activity is causing these dramatic changes to our climate the way these scientists are portraying it," Rubio said, "and I do not believe that the laws that they propose we pass will do anything about it, except it will destroy our economy."

OK, but say I do believe it. How do we fix this?

Well, it seems we can't fix this entirely (especially when it comes to the melting glaciers in Antarctica) but there are some things we can do. Scientists divide responses into two categories: mitigation and adaptation. Mitigation includes things like reducing levels of carbon and methane, which will slow projected warming in the next few years. (Check out how to do this through composting, here!) Adaptation relates to the innovations that must come in order to cope with the changing climate.

One example is cherries. Less chilling hours destroyed cherry crops in Michigan in 2012, with an economic impact of $220 million. Manipulating plants to withstand the cold or rezoning growing areas could alleviate the gravity of this issue.

Some smallholder farms are already practicing innovative farming techniques like growing indigenous plants that protect natural resources like water, and improve the density of nutrients in crops.There are many low-tech approaches to farming that can create more resilient crops. National Geographic outlines these methods as: "agroforestry, which integrates trees and shrubs into crop and livestock fields; solar-powered drip irrigation, which delivers water directly to plant roots; intercropping, which involves planting two or more crops near each other to maximize the use of light, water, and nutrients; and the use of green manures, which are quick-growing plants that help prevent erosion and replace nutrients in the soil."

In short, all hope is not lost, but we -- each and every one of us -- needs to be proactive in creating change and helping our ecosystem -- and in turn our food system -- stay as healthy as it can be.