I have a friend from Ireland . . . his name is Dean. Dean and his friends like to go to karaoke bars. And when I say his friends, I mean 30 plus people, so it is almost like a party. At one karaoke bar they frequented, there was a young man who liked to sing a song by a popular boy band called Boyzone. The way he sang it just grated on Dean's nerves. First he would sing it like the lead singer of this popular band, then he would sing it imitating a gay member of this band using the most exaggerated gestures and voice, as if mocking the gay community and portraying them in a humiliating and disrespectful way.

One night Dean could not tolerate this mockery of the gay community any longer, so he walked up to the DJ, asked to borrow the microphone and faced the audience. But he was not there to sing.

"I apologize in advance for what I am about to say, " Dean began. "When you all should be singing, dancing and having a good time, I need to talk about something serious. I also don't want to put a person on the spot, but it isn't the first time he's done it and I feel like I have to say something about him imitating a gay person."

"What if there is someone in this bar who is gay? How would they feel? How would you feel if you are gay and couldn't speak up for yourself because you're not out, or you're afraid you will be ridiculed or ostracized. I don't know any gay people, but I do know that if there are any gay people in this room, they're not feeling very good right now and that's not right."

Dean got a few cheers, and applause from mostly the females in the crowd, then he returned the microphone to the DJ and quietly sat down. Dean felt better about himself, because his words told everyone that he did not condone behavior that makes fun of others. Silence could be seen as supporting disrespectful behavior.

As Dean sat down, his older brother, Mark, asked him, "Why did you do that?" Dean replied, "I don't know. I was just so irritated by this guy making fun of gay people. What if someone sitting in the bar is gay? How would they feel? What if you are gay? How would that make you feel?" Mark said nothing, but inside feelings began to stir. He was the eldest of five boys and for years he denied his feelings. But this denial had also caused him to distance himself from his family for fear they might suspect his secret. Now, did his brother, Dean, know he was gay? Was the secret he guarded for so many years going to be revealed? Would he be ostracized from his family and friends? Mark didn't say another word, but his mind raced with questions.

A few weeks later at a family and friends' party at Mark and Dean's apartment, Dean walked into their kitchen and encountered his sisters and his brother, Mark, all crying. The tears were the result of Mark finally sharing the secret he had hidden for years. He is gay. His sisters thought that Mark had had too much to drink and was kidding. But in reality, Mark had had a lot to drink so he found the courage to tell the truth. Throughout the night his brothers and sisters came up to Mark one by one and affirmed their love. Later he came out to his mother and his father was told some years later. Mark says, "My darkest fear of being cast out from my family was quite the opposite. I have grown closer and more open with my family ever since." 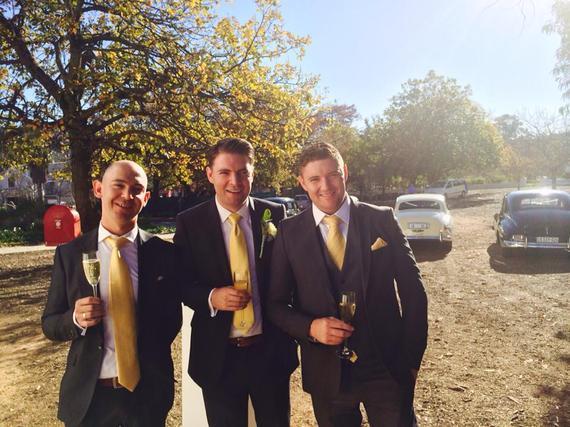 Who knows why Mark decided to come out shortly after that incident at the karaoke bar. I choose to believe that he came out, because he knew that one person in his family would not stop loving him. So here is the lesson I have learned from this story. . . . when I am afraid to speak up and think my words do not make a difference, I will remember this story about Mark and Dean. You never know who is watching, listening and looking for a sign that they have value, that life can be good, that they will still be loved. I will speak up for those individuals, just like Dean did. And perhaps one day, even if I never know their name, they will be able to speak up for themselves and that will be all that matters.

Postscript: Today Mark is an advocate for the LGBT traveler community. Travelers are from Ireland and often seen as second class citizens. They are compared to gypsies and regularly face discrimination. So Mark is bringing awareness to two marginalized groups: the LGBT community and the traveler community. His voice once silent is now speaking out and giving hope to others. And it all started because someone who didn't even know that Mark was gay, spoke out for him . . .